Cars on the cover: 5 unforgettable samples of automotive album art

My adult daughter keeps telling me that, as a music lover, I should subscribe to Spotify or some other streaming service. When it comes to exploring new material I suppose she has a point, it’s nice to be able to listen to whatever you want to listen to, wherever you want to listen to it. I’m no Luddite. On the other hand, there are a number of advantages to buying physical recordings of the music you love. Your carefully curated cloud collection the might disappear with a business decision and a stroke of a key in Silicon Valley, so it’s nice to have a real-life copy just in case.

Of course, there’s also the matter of album cover art.  Yes, I know you can download high-resolution images, but it’s not quite the same thing as holding the image in your hands, particularly if the album in question is a long playing 33 rpm vinyl record. That 12″ x 12″ landscape (or double or triple that in the case of double or triple albums) provides plenty of space for artistic creativity.

Since one of the earliest recorded songs was 1906’s My Merry Oldsmobile, it comes as no surprise that the record industry turned to cars when it came to illustrating the protective packages in which music was once widely sold. In 2009, The Telegraph in the U.K. published a list of 50 of the greatest car album covers. To be honest, if you’re American you likely wouldn’t recognize many of the album covers, or even the artists, as the list was very much British- and Euro-centric. (For example, it included the Johnny and the Hurricanes album cover with the band’s tour bus, a VW Type 2, and left off what is arguably the most famous record album to include a car on its cover: the Beach Boys’ Little Deuce Coupe.

Everyone’s a critic they say, so I compiled my own set of car album covers and they are listed below in no particular order. I tried to make it eclectic in terms of both vehicles and musical genres. If you have suggestions, list them in the comments below.

Billy Gibbons loves cars almost as much as he loves guitars. While the Eliminator hot rod on the cover is a drawing, the band commissioned a real-life custom that is still in the Rev. Gibbons’ personal collection.

Over the years, the Kinks have used a variety of stills from the photo shoot with this psychedelically-painted 1960 Buick convertible to grace the covers of various EPs and LPs. 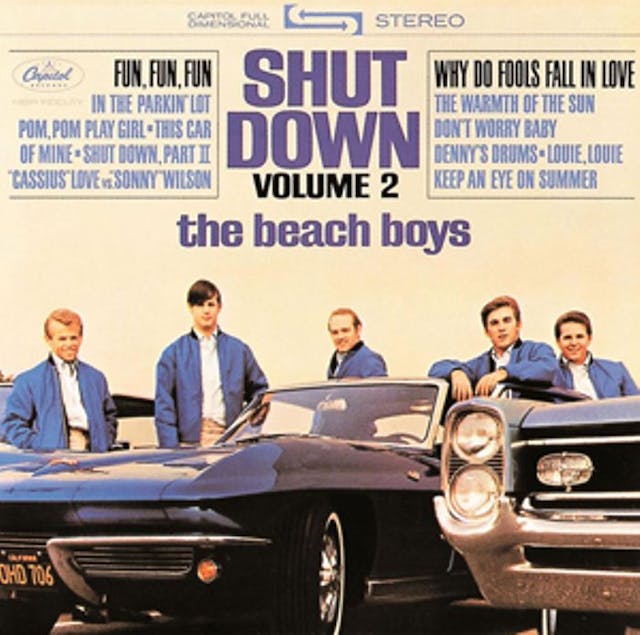 In case you didn’t know, a “Deuce Coupe” is a two-door 1932 Ford that had ties to both Detroit’s Alexander Brothers and California’s George Barris. Its stacked quad headlights, three downdraft Stromberg carbs, and striking blue and white paint job makes it instantly identifiable. As the Beach Boys’ early music was mostly about surfing and cars, it’s not surprising the band released another album. Shut Down Volume 2, with a Pontiac Grand Prix and Chevy Corvette on the cover.

As the urban legend goes, the surviving members of The Allman Brothers Band named this album Eat A Peach and put a peach truck on the cover (more accurately, art for the side of a peach crate) to commemorate the death of guitar player Duane Allman. The album was released soon after the band’s co-founder died in a motorcycle accident, and the legend is that he was hit by a peach truck. (Truth is, it was a lumber truck he was trying to avoid.) The title possibly comes from the T.S. Eliot poem The Love Song of J. Alfred Prufrock which includes, “Shall I part my hair behind? Do I dare to eat a peach?”, although it is just as likely that it came from a throwaway line of doggerel that Duane gave to a reporter. The Allman Brothers are from Macon, Georgia and Georgia is the “Peach State.” He told the reporter, “Every time I’m in Georgia, I eat a peach for peace.”