The holidays let us reflect on the friends, family, and items we cherish that make our lives better, even if they may occasionally rub us the wrong way. Such is the journey of Conner DeKnikker and his 1986 Ford LTD Country Squire LX, traversing multiple states to ensure that promises are kept.

Conner is no ordinary young gent; raised with Ford Blue running through his veins, he’s now a Customer Service Division Zone Manager for Ford’s Dallas Region. Ensuring the ideal dealership experience is one thing, but Conner also owns a Bronco, two MN-12 Thunderbirds, an SN-95 Mustang GT, and this Country Squire wagon. The latter is notable because Conner inherited it from his grandparents. Perhaps it’s better to hear the story from the man himself:

My grandparents, Marie and Albert, gave me the wagon in July 2019. I made the 1660-mile trip from Texas, where I revived it after over a decade of sitting in their barn. My grandmother told me she always wanted a wagon like the Country Squire LX, as it was a symbol of achievement (Panther Chassis wagons weren’t cheap), and it seemed appropriate as a mother of five kids. I suppose she felt it would allow her to travel in comfort, transport grandchildren, and be more involved in their lives. She passed away last month, and my grandfather was grieving especially hard for the loss of his wife of nearly 70 years. It was made worse because COVID-19 prevented him from having a funeral service. That’s when I decided to ensure her car would be there for Thanksgiving, since she firmly believed the wagon could bring the family together.

The decision to take the trip was truly last minute. The only person I told was my dad, for two reasons: My mom would worry, and I also wanted the visit to be a surprise for my grandfather. In his time of loss, I felt that my presence would be more meaningful if I arrived unexpectedly, especially with the wagon.

But we’re getting ahead of ourselves. As Conner’s last-minute decision meant he needed to get the wagon ready for the highway. The list included fresh Synthetic blend oil, coolant, belts and hoses, DOT4 brake fluid, new U-joints, and an axle service. Conner also ensured he had enough entertainment in the form of vintage cassettes and a USB phone charger to keep himself sane throughout the journey.

Day 1 (Sunday, November 22): Conner left for Amarillo, Texas, and enjoyed the sun setting over the Texas Panhandle. The vacuum-operated cruise control held up like a champ, but the vinyl split bench seat’s lack of lumbar support was aggravating his back. Luckily he found a comfy angle, sitting sideways in this V-8-powered living room as if he was sitting on his couch and binge-watching something on Netflix.

Before leaving town, Conner visited a Ford/Lincoln dealership in his territory for an impromptu photo op. Yes, during his vacation. If there’s a higher watermark for a Division Zone Manager than this, I’d like to hear it.

Day 2 (Monday, November 23): Conner left Amarillo in hopes of reaching Grand Junction, Colorado, before a snowstorm hit on Tuesday. The wagon made it without incident through Texas, the top of New Mexico, and into Colorado across the mesa known as the Llano Estacado.  The LX-grade wagon meant Conner had Ford’s multi-function “Tripminder” trip computer keeping tabs on him, which caught him using over 110 instantaneous MPGs on certain downhill runs.

But the wagon quit running as the sun set below the mountains and south of Westcliffe, Colorado. Coasting off the highway, Conner felt confident that he was ready for this moment: the wagon had the tools, extra parts (like the well-known Ford TFI ignition module), a sleeping bag, blankets, food, and water. A little inspection into the crank-but-no-start issue was concerning, as Conner couldn’t hear the fuel pump running. Luckily he had cell phone service and a roadside assistance subscription; a tow company dropped the wagon off at the local Ford dealership in Cañon City. This is also where our weary, road-hardened protagonist found a hotel and called it a night.

Day 3 (Tuesday, November 24): Since Uber or Lyft haven’t reached rural Colorado, Conner grabbed a taxi to the dealership. Perhaps they took pity on a stranded Ford employee, as they squeezed the wagon into their busy work schedule, verified the problem but could not find a fuel pump locally. Getting a part from Denver was impossible due to a snowstorm, and parts stores in the area only use 2WD trucks. Conner reached out to his network of Ford dorks friends, and we recommended using a readily available Fox Body Mustang fuel pump. And $480 later, Conner’s wagon roared back to life. Unfortunately, he missed his window to make it before a snowstorm over the Monarch Pass on US50 to Grand Junction, so he chose the longer route: north through Wyoming. But remember that phrase about the best-laid plans?

Just before sunset the wagon died once again, south of Colorado Springs. The fuel pump was silenced, so Conner swapped a fuel pump relay—to no avail. Standing/freezing on the side of the road, he had plenty of time to marinate on his decision to travel by 34-year-old station wagon. Hoping for the best, Conner popped in a Lindsay Buckingham tape  and enjoyed “Holiday Road” as thousands of faceless Coloradans whizzed by his wood-festooned wagon. His tow truck arrived an hour later and unloaded the wagon at Phil Long Ford of Colorado Springs.

Day 4: (Wednesday, November 25): Closer to civilization this time, Conner used Lyft to visit the dealership at 7:30 a.m. An apologetic service advisor informed him they were booked until Friday, so Conner’s mind went spinning. He even considered renting a car and going back home to Dallas. That’s when, like any loyalist spending time at a new car dealership with a classic from the same brand, he got creative and a bit lucky.

Conner asked the service advisor if he could borrow a fuel pressure tester. “Why?” he was asked. Conner suggested that knowing if there was 30–40 psi at the fuel rail would determine if there was a problem under the hood that he could fix without assistance. By then, a veteran technician named George Gillian emerged with a fuel pressure tester and volunteered to help. Gillian has worked at Phil Long Ford since 1979. Ironically, that’s the first year of the Panther Chassis, which underpins Conner’s wagon. Small talk commenced and a vintage Rotunda “Super Star” code reader emerged with familiar two-digit codes right behind it. Gillian added, “I remember these codes, but I couldn’t tell you what I had for dinner last night.”

Gillian noticed that the fuel pump relay would click on when he touched the ground at the negative battery terminal. He noticed the poorly completed splice (fixed in the photo above) made by Ford’s Division Zone Manager and gave him some well-deserved grief about his commitment to Quality is Job 1. With fuel feeding the wagon, Conner left for Wyoming with only $75 less in his bank account.

Our protagonist then hit I-25 through Denver, Fort Collins, and into Laramie. There’s nothing quite like seeing America through a hood ornament, something that’s lost behind the wheel of a more modern automobile. Conner’s goal was to reach Salt Lake City, but after filling up in Laramie, a gaggle of concerned citizens hollered, “Your car is leaking!” Conner hoped the problem would lessen as less fuel was in the tank. Mercifully it did, to the detriment of the wagon’s cruising range. Many fuel stops later, Conner arrived in Salt Lake City, where he crashed at the home of a friend and fellow Ford enthusiast.

Day 5: (Thursday, November 26): Conner reached the Idaho border, where the wagon’s impressive hood matched the snow-kissed hills and flatland prairies. The heater did its job commendably and the ride was effortless down I-15 and I-84 as he neared Boise. Conner whipped out his box of cassettes and let the stylings of John Fogerty, Simon and Garfunkel, and even Arlo Guthrie’s Thanksgiving classic “Alice’s Restaurant” take him home.

Evening had arrived when Conner reached his grandfather’s house in Cambridge, Idaho. Just in time for Thanksgiving dinner, Conner greeted his father, aunt, and grandfather to celebrate as a family.

Conner’s 88-year-old grandfather cut the Thanksgiving turkey, and the photo proves that the family’s wagon accomplished its mission: Everyone was home for the holiday, but Conner still hadn’t visited the other side of his family.

Day 6: (Friday, November 27): Following his dad from Idaho, Conner headed to California to see his mom. What’s normally a nine-hour trip was extended by Dad’s need to motor well under the speed limit to save on fuel. Conner had enough of that in the Sierra Nevada Mountains and passed Dad in the big wagon, ensuring he wasn’t riding the brakes any more than necessary on the downhill slopes. Turns out Conner’s concerns about his mom not approving of this wood-paneled road trip were unfounded, as she was supportive of his gesture.

Day 7: (Saturday, November 28): There’s something wonderful about traveling without a timeline, no? Conner visited Bob, the town’s local barber and friend of the family. This wouldn’t be noteworthy except for the fact he was closing his business, Continental Barbers, after 57 years. Today was his last day. It’s unfortunate to see American institutions like a local barber shop come and go, much like the popularity of the wood-grained station wagon.

Day 8: (Sunday, November 29): Unlike some family members with reservations about the old wagon, this day began with a McLaren following alongside and a pretty young blonde girl shouting, “Clark Griswold!” out of the supercar’s window. The unexpected Vacation movie comparison surprised our protagonist, much like this unexpected visit to see his mother’s parents. Conner’s previously discussed apprehension to travel because of COVID-19 was on everyone’s mind, but Conner’s loss of his other grandmother ensured that he appreciated any opportunity to visit family.

Day 9–10: (Monday and Tuesday, November 30–December 1): Conner made a futile attempt at addressing the fuel leak when full, dropping the tank and installing a rubber gasket. The original gasket (which should have been replaced alongside the pump) was indeed leaking, but the fix only reduced the severity of the problem. The real problem wasn’t found until he reached home (crack in the return line), but we’re getting ahead of ourselves. Again. Our protagonist still had a ways to go, arriving in Kingman, Arizona, by 11 p.m.

Day 11: (Wednesday, December 2): Conner visited Mesa, Arizona, to help a fellow enthusiast with a five-year newer version of his wagon. One fresh starter and new vacuum lines later and the 1991 wagon came back to life after a two-month slumber. The attention that these two received while cruising down the streets was beyond impressive, as these two relics of a bygone era are even the same color.

Conner then travelled to Las Cruces, New Mexico, and noted there were just barely enough gas stations in southern New Mexico to make the trip, given the wagon’s restricted fuel range.

Day 12: (Thursday, December 3): The last leg was only 685 miles, but the wagon proved that older cars can be just as reliable as newer ones, provided you treat it right and remain vigilant when issues creep up. The journey lasted 12 days and covered 4200 miles, a trip that cars like a Panther Chassis Ford were born to devour. There’s no doubt that 1986–91 Country Squires are incredible bargains for reliable, fuel-injected family transportation with a vintage aesthetic. Is it any surprise that Conner gets more looks driving his Grandmother’s wagon than in his latest company car?

From all of us at Hagerty, we hope you enjoyed Conner’s story, and we wish you a very Merry Christmas! 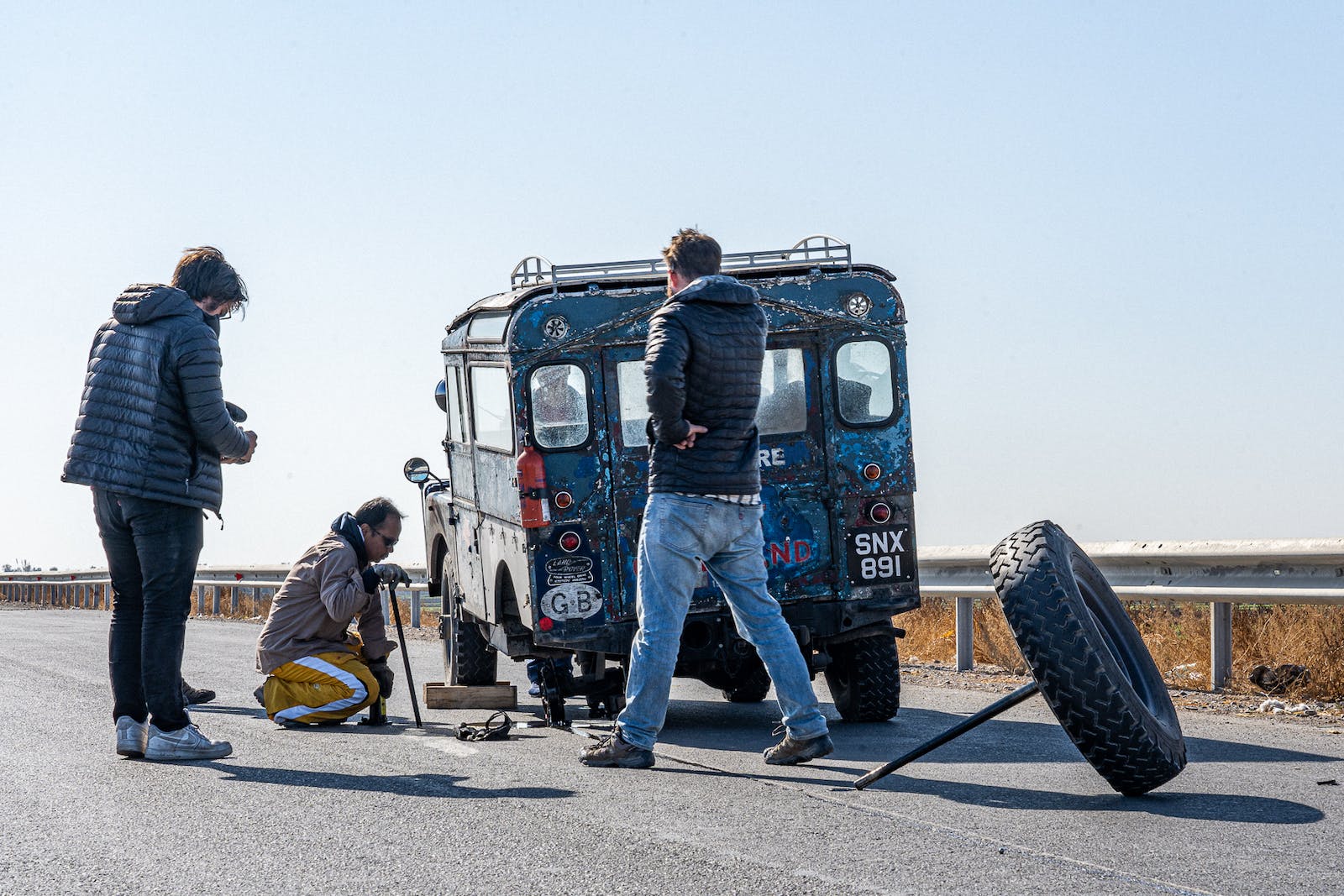 Driving Don’t break down in a dictatorship, and other tips when driving across Eurasia
Alex Bescoby

Get an insurance quote
A Story About
Share Leave comment
Read next Up next: Garage Zen: The joy in the familiar