Are you a finalist in our Volvo giveaway contest?

Welcome back to our Volvo 240 contest, aka Project Freebrick!

Excitement fills the air! We are now down to just THREE finalists!

To help foster car culture in all its forms while also making a broad and true statement about the importance of simple joy, Hagerty is helping give away a classic Volvo 240 sedan.

This car is neither perfect nor traditionally pretty! Nor is it worth much money. A Hagerty Media staff member once described this exact vehicle as a “class hoopty.” (Those words were meant as compliment. Also, that staffer was me.)

What is this Volvo? Simple: It’s a running, driving icon of Swedish culture that promises both grand entertainment behind the wheel and a fun entry into the world of classic cars.

The Volvo’s current owner, a Washington State man named Griff Shelley, wants it to find a good home. We pitched this contest to him because we believe in certain concepts: Life. Liberty. The pursuit of unburstable redblocks. To say nothing of the notion that car culture is too often gatekept by funding and silly rules of engagement. Websites and YouTube may suggest otherwise, but you don’t need a ’65 Mustang or V-12 Ferrari to play. You don’t have to hit Pebble Beach once a year, or even your local Radwood. You don’t even have to know how to wrench. You just have to love the game.

If you’re just now joining us and would like to know more about this giveaway, CLICK THIS LINK. You’ll be taken to the original contest launch post, written by your narrator, that went live on June 1, 2022. (For the record, this contest was also dreamed up by your narrator.)

Response was fantastic. We asked readers to write a short post in the Hagerty Community forums, laying out why they deserved the car. Over the past few weeks, 172 people across America did just that.

You can read their work by CLICKING THIS LINK.

This contest closed at 8:00 p.m. ET on June 22, 2022. Working closely with Mr. Shelley, Hagerty Media has culled those 172 responses to just three finalists. Those three entries are pasted in below.

Thanks for reading—and a hearty thank you to everyone who entered!

Here now, in alphabetical order by username, your finalists:

I believe it’s yours truly that should pilot this lovely storage shed of an automobile down the I-5 to my humble home in suburban Portland. I’ve done my best over the course of my automotive stewardship to not be pigeon-holed into any of the following categories: drifter hotboi, euro snob, f-body mullet man, Swedish hipster, Miata Autocross nerd, etc. I try to keep my friends and family guessing as to what I’m going to arrive in. I’ve always had a strong admiration for the Volvo 240. Living in the PNW, they truly are part of the landscape.

This would be the perfect undercover, park-anywhere dinghy for when I venture into the now rather unhinged town center of my home city. This silver bullet, being about as approachable as a Labrador puppy (as far as a retro driving experience goes), could also possibly be the gateway drug to vintage motoring for the wife.

As I write this, I am selling my track car (and the truck to pull it) in favor of a more sensible dad car. See, my wife and I had been trying at the kid thing for years. After two miscarriages and a failed round of IVF, we had essentially given up. We then decided I could pursue my dream of becoming a weekend racing driver. It was around the time I’d finished getting the roll cage welded into the Camaro that we found out she was pregnant. Yay!

This old Swede would be such a welcome friend that could be enjoyed by the three of us on family outings, and hopefully give my daughter the same disease I have: the appreciation for characterful storied machinery. Steering her away from the disposable-appliance side of life.

My infatuation began in high school (as unrequited love stories often do). I had just moved to California with my family early that summer. She lived across the street, parked seductively in front of my neighbor’s house, her chrome trim glistening in the sun. I dreamed of taking her on weekend trips along the coast with the radio cranked up and the windows rolled down, trying to find the perfect spot to watch the sun sink into the Pacific.

Falling in love with a Volvo wasn’t something a car-crazy kid from Ohio was supposed to do. American metal—Fords, Chevys, and Dodges—should have been the object of my desire. But the heart wants what it wants. She would be my first.

One day, a For Sale sign appeared in her back window, and I ran to my neighbors’ door. Because she had a few years on her, and a few miles, she could be mine if I worked part time for a few months after school. He promised to save her for me. Promised. I gave him $100 and a handshake.

One day, several months later, I came home to find she was gone. Sold to a cousin in Arizona. I got my deposit back, but I was heartbroken. I never saw her again. Life goes on, and there would be others (mostly Hondas and Toyotas), but you never forget your first love. I still think of her every time I see an old 240, which is less and less these days. All the road trips and adventures we could have shared. I would’ve given her a good home. And I want this car because I believe in second chances.

“Why is the keyhole so much lower than the driver’s door handle?” Boosted in my car seat, this was my first thought as a nursery-schooler, as I observed the 240 parked beside me. The 240 wasn’t an instant love for me. It was a slow, like 114-horsepower slow, kind of love.

As my dad pulled into the driveway with a new-to-us 1991 240, I was taken aback by its size. Perhaps because I was six, or because it dominated the 1985 Jetta it was replacing in our garage. As kids we’d say the vent dials looked like Oreos—they do—and learned to appreciate the trademark slatted headrests.

As the Nineties progressed, I became insanely jealous of the families that upgraded to 850s, S70s, and V70s, cars that were so modern and luxurious relative to our plebeian 240. However, when reality set in on replacing it, I realized I loved the car. My parents caved and kept it for us. I took and passed my driver’s test in it. With straightforward controls and renowned visibility, it was an unbeatable first car.

Finding beauty in the rectilinear design, the 240 was the subject of my final college Drawing, Printmaking, and Painting assignments. During study abroad in Copenhagen, I traveled to Gothenburg to do the Volvo factory tour and museum, where I saw the last 240 ever built.

While studying architecture, I learned that the Danes build structures to last forever. Similarly, the 240 was built to last, and my love of the 240 is just as enduring. After donating ours in 2012, something has been missing. Hoping to fill this void, I would relish the opportunity to call this one my own.

(Submissions have been formatted for clarity and edited for typos.) 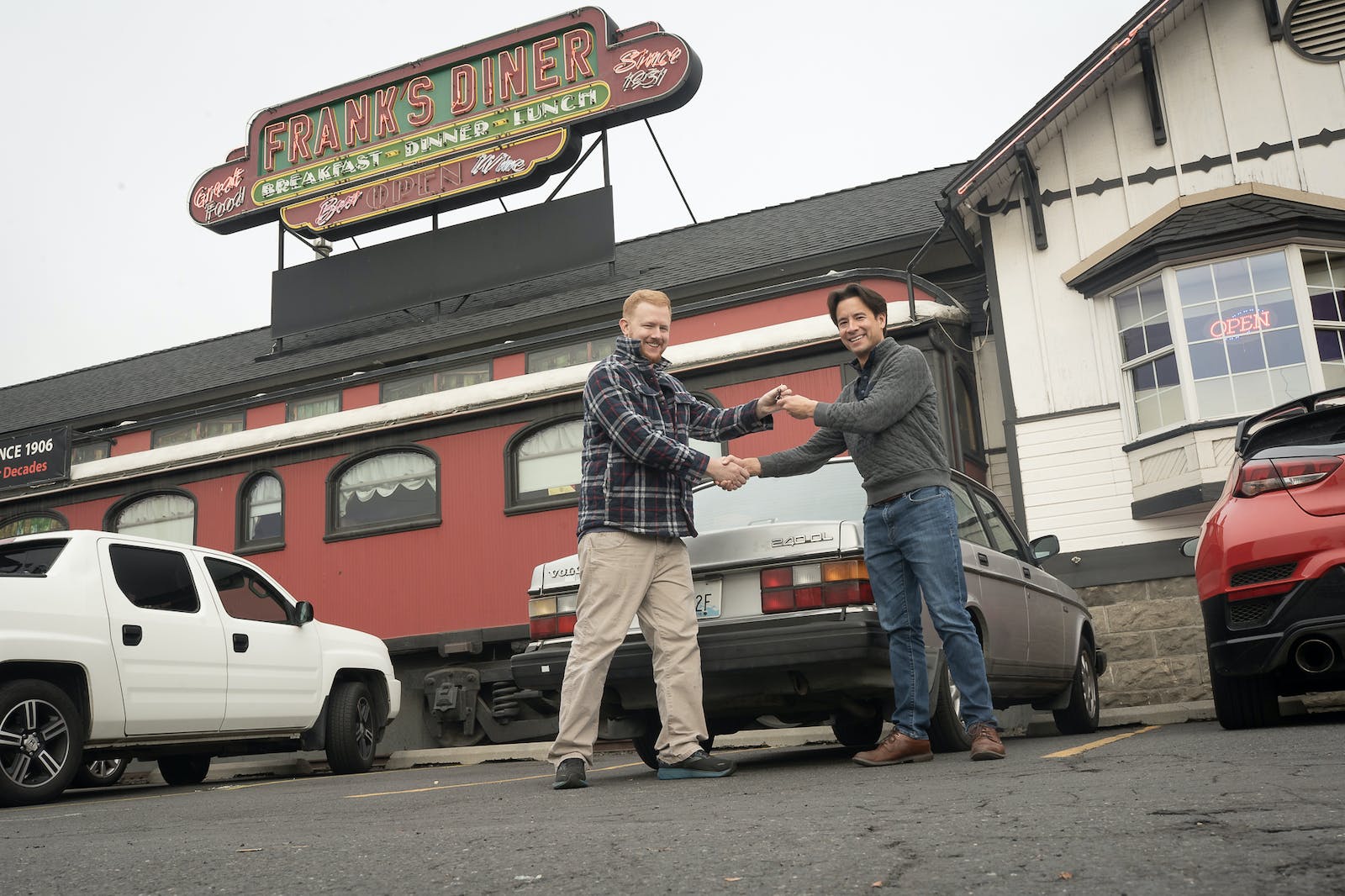 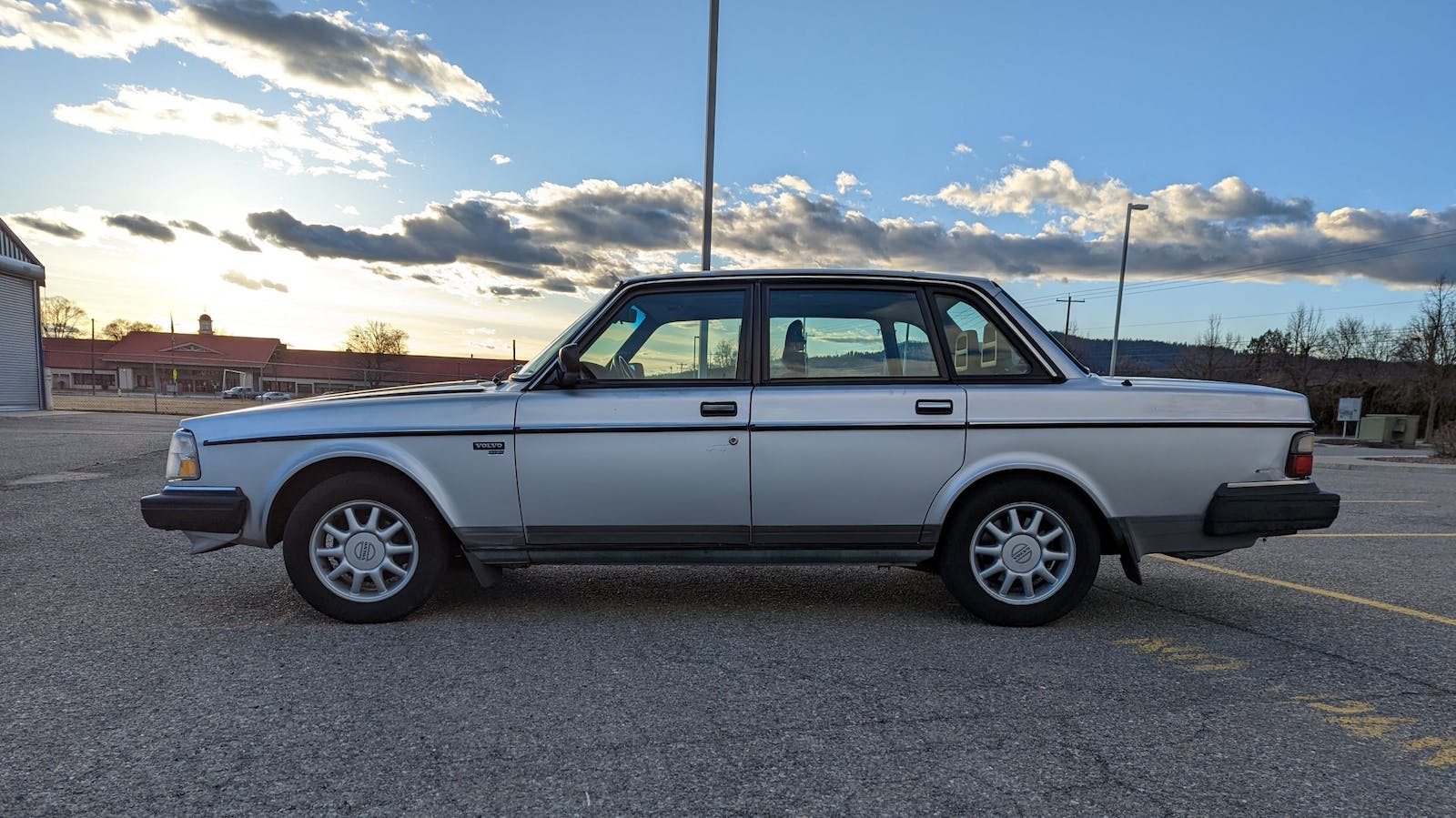 Get an insurance quote
A Story About
Leave comment
Read next Up next: Masterclass: When Nigel Mansell destroyed Nelson Piquet at the 1987 British Grand Prix