The letter car that saved Chrysler

Late last year, Tom Hickey, a real estate agent in Southern California, rescued a 1983 Dodge 600 sedan from a CoPart salvage yard. Not a rare Hemi ’Cuda. Not a Cobra in a barn. A K-car.

To be accurate, the 600 was an “E-body,” a K-car model with three inches spliced into its wheelbase to yield more rear seat room. Although “rescue” might seem a strong term for buying a workaday 1980s sedan, an ultimate fate of dismantling just seemed wrong for a car in excellent running condition with 31,000 original miles and minor cosmetic blemishes.

The Dodge had reached CoPart, a global auction and salvage company, via the State of California Vehicle Retirement Program, which pays motorists $1000 to give up old vehicles. (Low-income individuals can get $1500). Hickey bought the car for $500 but also had to hand over nearly that amount in various fees to take title. The car needs a new brake master cylinder, and it failed the smog test due to a clogged catalytic converter, which will be replaced.

“It’s often easier for a car’s owner to take the money than to keep paying for repairs,” says Guy Coulombe, president of the Chrysler K-Car Club and who had alerted Hickey to the Dodge. “It’s difficult to pass the smog test, and registration fees are high, so lots of old cars are thrown away.”

The K-Car Club, which Coulombe founded in 2007, is an online presence with a website, Facebook page, and YouTube videos. The club, which claims 2200 members in North America and some overseas, participates in the largest Mopar shows in California, the Spring Fling and Fall Fling at Woodley Park in Van Nuys, bringing about two dozen cars.

Introduced in the fall of 1980, the original K-cars—the 1981 Dodge Aries and Plymouth Reliant—were already under development when Lee Iacocca became Chrysler Corporation chairman in 1978. Aged models, poor build quality, and mismanagement had brought Chrysler to the brink of bankruptcy. Federally-backed loans ensured that the K-cars could get built, and their success—while the country struggled through two recessions—is widely credited with saving Chrysler from demise. More than 307,000 were made in the first year.

The boxy two- and four-door K-car sedans and wagons echoed utilitarian styling themes of previous Chrysler compacts like the Dodge Dart and Aspen, but the K was radically different underneath: front-wheel drive with a transverse four-cylinder engine and weighing about 2500 pounds.

Built on a 100.4-inch wheelbase, the K-cars offered reasonably roomy cabins and trunks. The bench seats, flat dashboard, and column-shift for the optional automatic transmission were familiar sights to buyers accustomed to mainstream American cars. The K-cars offered practical, comfortable transportation with no pretenses of being anything else. On the trunk lid of both models, the letter “K” reflected the use of the company’s model code as a marketing tool.

Motor Trend named Aries and Reliant its 1981 Cars of the Year. MotorWeek, in its road test of a 1985 Dodge Aries wagon, said the car was “spacious for its class, well built, and quiet, respectably efficient, with quite adequate power and handling.”

The 1981 K-car’s base engine was Chrysler’s then-new 2.2-liter inline four with 84 horsepower; a 2.6-liter four from Mitsubishi offered a bit more power and torque. Layering on luxury features and different styling to the K cars yielded the upscale Dodge 400 and Chrysler LeBaron for 1982, including the first American convertibles since the 1976 Cadillac Eldorado.

In addition to the Dodge 600, other E-body variants included the Chrysler E-Class and New Yorker and Plymouth Caravelle. In 1984, Chrysler’s optional turbocharged 2.2-liter four gave these larger models much-needed oomph. Production of K-cars and their E-body variants totaled more than 3.5 million through 1989. By then, the versatile K-car hardware had become the foundation for a wide array of Chrysler, Plymouth, and Dodge sedans, hatchbacks, coupes, convertibles and the groundbreaking minivan.

Coulombe, whose first car was a K, says he fell in love with the modest but comfortable machines and today owns several, including a 1989 Dodge Aries with 300,000 miles and its original engine. He also has a Chrysler LeBaron Town & Country woody wagon and a 1985 Chrysler Executive Limousine in need of restoration. The latter was from a limited run of stretched K-cars built from 1983–86.

“I call the K-car the classic luxury economy car of the 1980s,” Coulombe says. “They have great visibility and excellent ride quality, and the E-bodies are very roomy. To this day, most of us in the club think they have more comfortable seats than a modern rental car. They’re feasible as daily drivers, getting 25–28 miles per gallon.”

Hickey, 58, owns a half-dozen 1986–2002 American cars, which he prefers for their roominess and soft ride comfort. He plans to use the white Dodge 600 in his real estate business.

“It rides like a much larger car,” he says. “It’s quiet and solid and the four-cylinder engine gets good gas mileage.”

Hickey’s Dodge also has the bonus of Chrysler’s Electronic Voice Alert, a sophisticated voice synthesizer that would lower radio volume and then, in a male voice, inform the driver “a door is ajar” or warn that headlights were left on, seat belts weren’t fastened, or gas or various fluids were low.

“The guys in the CoPart yard had never heard anything like it on other cars. One of them got a little spooked,” Hickey says.

“I fell in love with K-cars because, at six-foot-nine, I can sit comfortably in the front seat,” says Gadomski, who runs a dietetic bakery with his family.

Gadomski’s diverse collection of 25 vehicles includes 10 K-cars and K variants. Among his favorites are the convertibles, including a 1983 LeBaron and a pair of 1985 Dodge 600 ES Eurosport models in his favorite color, gold. Originally from Illinois, Gadomski recalls visiting the Chicago Auto Show in 1982 and seeing the Chrysler Executive Sedan prototype. Today he owns a K-car limo, but one built by Palomino, not Chrysler.

“I guess most kids my age would have been looking at the Corvette or Camaro, but I was attracted to luxury cars,” he says.

Because of the K-car’s front seat comfort, Gadomski has owned several as daily drivers. For many years, he drove a 1993 Chrysler Imperial, a “Y-body” that was the ultimate sedan development of the K-car sedan platform. He has another like it in his collection.

For those looking for a K-car, Coulombe suggests that it might be easier to find one on the East Coast than the West, where many have disappeared in “cash for clunkers” programs.

“There are still a lot of K-car convertibles in California, but sedans are going extinct,” he says. “That’s why that 600 was a special save.”

K-cars might be inexpensive to buy, but maintaining them can be a mixed bag.

“Engines and transmissions are easy to rebuild, and parts are readily available,” Coulombe says, cautioning that quality and durability of service parts like brakes, struts and alternators offered by some store chains are not as good as the original Chrysler OEM parts. “It’s also hard to find someone willing to work on these old K-cars.”

It is easy, however, to find backseat critics who might deride the humble Chrysler K-car, neglecting the fact that it was affordable transportation for millions and, without it, there would not have been Viper, Challenger, or even today’s FCA.

“K-cars have long been the butt of jokes, even in Mopar circles,” Coulombe says. “We’re starting to see a change.” 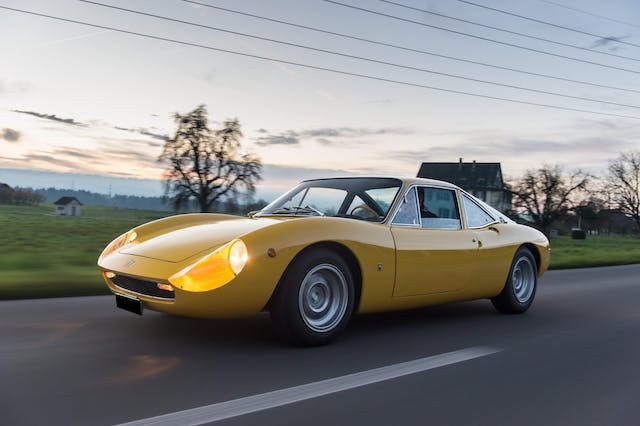