In the early 1950s, Jorge Sordelli was an eight-year-old boy in Argentina. After seeing a movie in which a patrol officer pursued a car in the middle of the desert, he became fascinated with the world of cars. “I could see that its wheels were shaking violently. I became intrigued as to what was underneath the body of the vehicle to allow its wheels to shake at such high speeds without ripping off the axle,” Sordelli says.

He started searching for toy cars with proper suspensions but quickly learned that they did not exist.  Even at that age, Sordelli was undeterred, and he began modifying models cars with small metal notebook spirals that functioned like coil springs. That diligence, creativity, and inventiveness would lead him down a road that’s included a career in automotive design, as well as a passion project producing exquisite 1/5-scale cars.

At 10 years old, Sordelli was waiting eagerly every month for Popular Mechanics and Automundo Corsa (published in Argentina). He began contacting Ford, GM, Volvo, Saab, and Mercedes, requesting car brochures to use as reference for a project he had in mind. From the pamphlets, he selected vehicles that appealed to his sense of design and commenced drawing and painting them to fulfill his artistic hunger. At 11 years old, he attempted woodcarving and completed a scale model of a 1959 Valliant.

“This,” Sordelli says, “began my process of evolution and refinement, the incorporation of new materials, how to obtain all necessary information from a single photo, learning to create and complete surfaces and volumes, and to develop drawings and sketches in order to achieve the 3D reproduction of each design.”

Two years later, Sordelli began attending ING Huergo, a technical school in Argentina, to further his technical knowledge. As a student he developed his own design style, building his first scale model, a 1961 Ferrari 250 GT SWB that he sold to one of his classmates. In Argentina, Ford offered young students the opportunity to visit its industrial center, and Sordelli jumped at the chance. He was drawn to the product engineering and development division and spent many days devouring product design information.

As Sordelli’s model-making skills improved, so did his renown. He received north of 50 scale-model commissions from car dealers who sponsored racing teams competing in Turisomo Carretera Series (similar to America’s NASCAR). At age 25, after earning a Master of Science Degree in Buenos Aires, Automundo Magazine published short articles and notes about Sordelli’s scale models that essentially opened the door to a lifelong career in product and vehicle design. Next came design positions with Mercedes-Benz and Ford in Argentina, but Sordelli also started his own company designing and developing tractors, self-propelled harvesters, trucks, and even a carrousel for Zoo Buenos Aires.

Sordelli moved to California in 2000, hired by the innovative concept car company Metal Crafters, of Fountain Valley. Soon after he was contacted by the curator of the Motor Racing Museum of Juan Manuel Fangio, in Buenos Aires, to help create the principal design lines for a replica of the Lancia Ferrari D50 F1 race car that Fangio drove in the Italian Grand Prix when he won the World Championship in 1956.

Years later, while working a Mazda Design Center, Sordelli was contemplating his passion and dreams for the future when he had the idea of restarting his love of combining craft and art. With the advanced technology available now that wasn’t imaginable when he was a kid in Argentina, Sordelli could develop and build scale model cars in an entirely new way. Fittingly, his first 1/5-scale model in the U.S. would be of Fangios’s Lancia-Ferrari D50—the same car he helped re-create for the Fangio Museum.

“The processes applied are similar to those used in the development of concept cars, plus manual artistic skills,” Sordelli explains. The challenge of incorporating these skills comes with using 3D CAD software and photographs to create computerized renderings for the model’s construction. This software enables the artist to view all angles and sides of the car as a three-dimensional object, giving him a full virtual picture of the “blood red” Ferrari race car that became Sordelli’s obsession.

The artist uses miniature fabrication tools to construct the tubular chassis and body parts for all of his models. To cast the engine block, carburetors, transmission, rear end, and tires, he provides blueprint software to a company that makes molds and can cast the metal parts on a computerized machine. “On the marriage of CAD and artistic creativity, CAD is a software that allows you to create any 3D geometry in parametric form that can be edited and resized at will,” Sordelli explains. The system allows developing parts, assemblies, and moving them in virtual space to observe and verify them in any position. In this way, the virtual prototype is built in three dimensions that start from an empty 3D space and the surfaces of each vehicle component are modeled sequentially. Many sketches and photos are used to ensure the greatest aesthetic realism, helping create a digital sculpture of the complete car.

After Jon and Mary Shirley won Best of Show at the Pebble Beach Concours d’Elegance in 2008 with their stunning 1938 Alfa Romeo 8C 2900B Touring Berlinetta, Sordelli was so enamored with the classic that he decided, on his own, to build a 1/5-scale model of the rolling work of art using CAD. “My goal is to create beautiful and exciting scale models that incorporate a perfect balance between sculpture, proportion, hand craft, and technology,” Sordelli says. The Alfa Romeo 8C is an exquisite, rare machine that features prominently the collections of John Mozart, Sam and Emily Mann (Best in Show at Pebble 1988), and fashion designer Ralph Lauren. An 8C 2900B won the 2018 Pebble Beach Concours Best in Show.

Sordelli’s focus is “the optimal expression of historic and famous great cars,” which nurtured his interest in the celebrated and race-winning 1965 Essex Wire 427 Cobra (model CSX 3009). The car is nicknamed “Ollie the Dragon” because of its habit of shooting foot-long flames out of the hood scoop. Essex Wire was a huge provider of magnet wire for automotive, industrial, and energy industries in the ’60s, and it teamed up with Ford to enter the auto racing scene. As part of its competition history, the Cobra was campaigned by Dr. Dick Thompson, Skip Scott, and Ed Lowther, recording podium finishes in Pensacola, Watkins Glen, Road America, and Bridgehampton.

Sordelli couldn’t resist the challenge of constructing another 1/5-scale model of CSX 3009 using his advanced knowledge of CAD design software. “The body of the model is made of copper by electro deposition,” he says. “I am always looking to optimize the process, and in the Cobra’s case I used the following method: complete re-engineering and modeling of the surfaces in CAD, print the male body in 3D, cast the female mold in silicone resin, manufacture the body by electro deposition in copper, and rework the openings and development of the internal structure.”

Even as he presently works at the Studio-Lincoln-Ford in California, Sordelli is keeping quite busy on the side. His current projects include an Alfa Romeo Torricelli 8C Spider and a Karma SC1 Vision Concept. Plans for other vehicle projects include the Mercedes-Benz W196 Silver Arrow and a couple of Ferraris, the 335S and the 275 GTB. These projects are, as you might imagine, extremely time intensive. Sordelli says that they require 1000–2000 hours over the course of 4–6 months. Prices vary and are part of the discussion for any commission, but suffice to say it’s more than what you’d pay at the local hobby shop for a model car.

All of the artist’s final detail work, which takes place on his garage workshop table, now operates under the Scala Design Studio name. His vision is to create and deliver excellence, from concept to realization “through private commissions to fulfill the desires of other passionate car enthusiasts.” We’d say he’s achieved that, and much more. 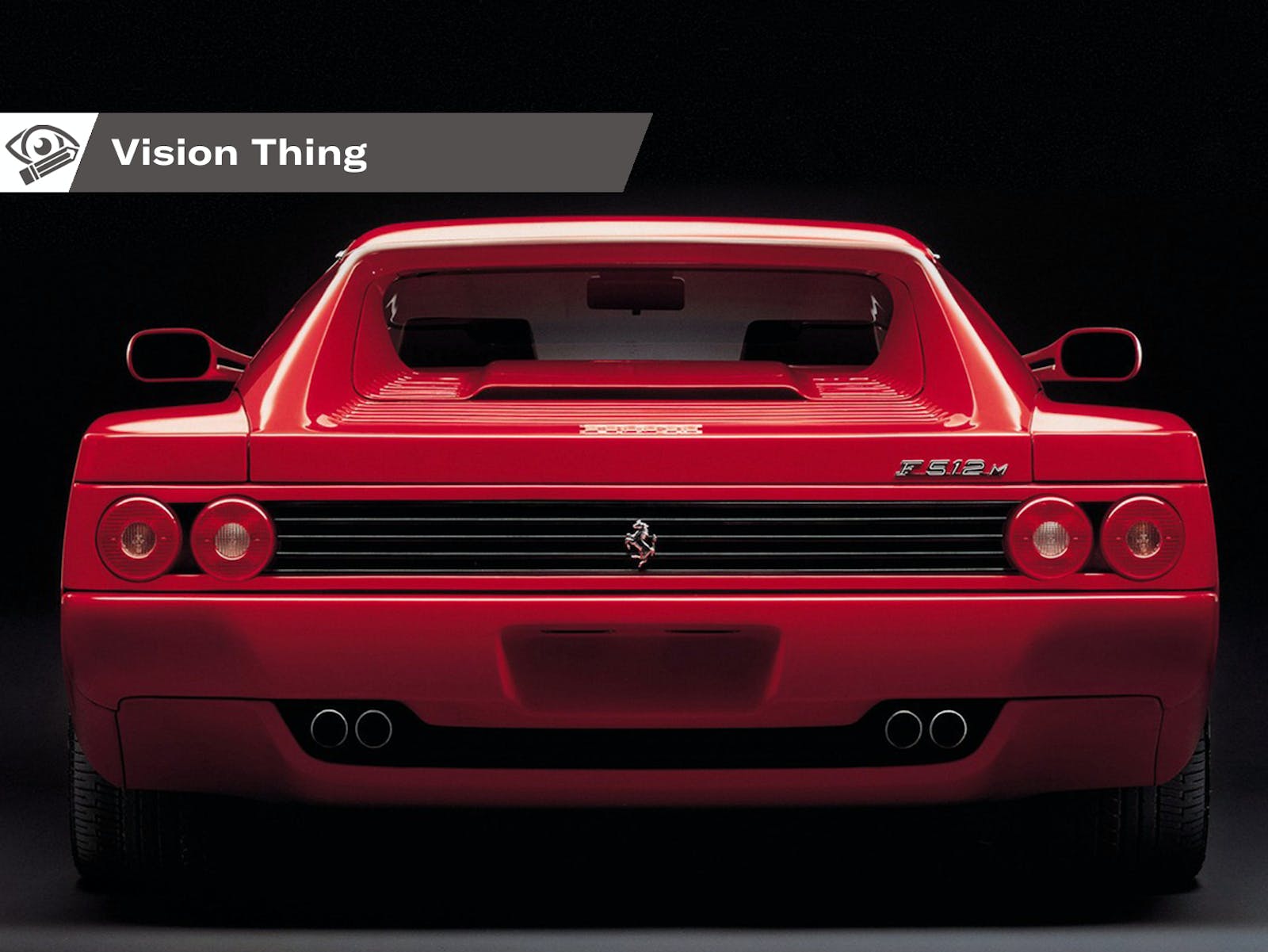 Get an insurance quote
A Story About
Share Leave comment
Read next Up next: Volvo’s VESC concept completely changed the philosophy of auto safety