A 2500-mile prototype Shelby GT500 Super Snake is currently up for grabs at RM Sotheby’s online-only Open Roads sale. This unique pony car could be one of the most affordable ways to get behind the wheel of a ridiculously powerful, unmistakably American ride. It may well be the ultimate expression of live-axle Mustang performance. 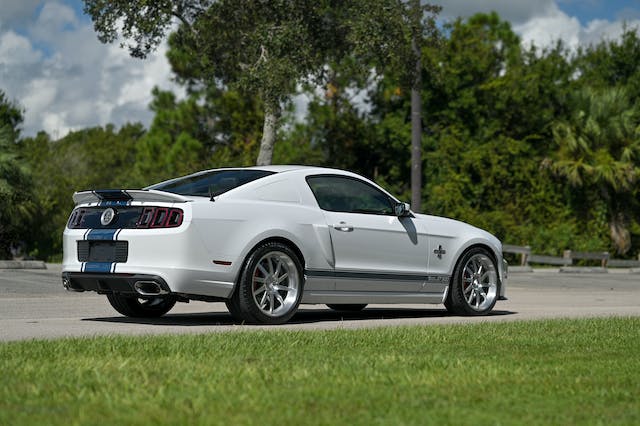 Each 2014 Super Snake began with the already potent Shelby GT500 as its base. From there, Ford dropped in its “Trinity” V-8, the largest displacement V-8 in the Modular family. Based on the tall deck architecture of the 5.4-liter, it increased both bore and stroke (3.68×4.18 inches, respectively) to land at 5.8 liters. Topped with impressive cylinder heads and a 2.3-liter Magnuson supercharger, the Trinity churned out 662 hp to make it the meanest factory pony car on the market until the dawn of the Hellcat.

Of course, Shelby wasn’t satisfied with 662 hp, so it brought GT500s to Las Vegas to create an even more brutal version. Swapping in Wilwood brakes, forged aluminum wheels, and upgraded cooling—plus, replacing the 2.3-liter Magnuson supercharger with a 3.6-liter Kenne Bell unit—added $40,000 to the base price of the GT500 and resulted in 850 hp. The Michelin Pilot rubber did its best to put the power to the ground, but it was a lot to ask. The Super Snake was—and still is—simply an animal.

This Oxford White example wears Guardsman Blue stripes and has just 2500 miles on the odometer. It comes from the collection of Shelby enthusiast Les Baer and carries a Shelby serial number of 01P to designate its prototype status. RM estimates that the unique Shelby will bring between $60,000 and $80,000. This range falls right in line with our price guide, which puts a #2 (Excellent) condition car at $75,000. The car’s ownership might have little influence in its value, other than proving it’s been in good hands, but the simple fact that it carries an interesting serial number will boost this car’s appeal. With about a week left to go, bidding stands at $50,000.

I put a few hundred miles in a 2014 Shelby GT500 Super Snake back in 2014 and can say that in my short time behind the wheel I received more invitations to street race than I have in any other vehicle I’ve ever driven. Mustang owners and fans know what a Super Snake is and would love nothing more than to have the bragging rights that come with besting one in a drag race. If you plan to make this car your own, know that you’ll have a target on your back and you’ll forever have wannabe racers throwing revs your way.

It may just be worth it.

Get an insurance quote
A Story About
Share Leave comment
Read next Up next: Dive into these wild Citroën 2CVs—or are they Sea-troën 2SeaVs?