The Shelby Cobra is one of the most recognizable sports cars ever created. The curvy aluminum body embodies the quintessential roadster, but in 427 guise it adds a more purposeful stance with wider flares. The Cobra’s short wheelbase paired with the powerful, roaring Ford V-8 made it a handful on track for all but the most experienced drivers.

These ’60s cars demand a pretty penny; the later fiberglass reproductions, which are equally attractive, can also cost a small fortune. RM Sotheby’s is offering up three continuation-spec, big-bore Cobras that offer plenty of the original Cobra mystique, along with hand-formed alloy bodies executed in striking bare metal. The choice isn’t easy.

This striking Cobra wears a hand-built aluminum body from Kirkham Motorsports. Fully polished, save for the brushed stripes that run down the center, the body isn’t the only place you’ll find plenty of aluminum.

Powering the roadster is a 550-horsepower, 468-cubic-inch Ford FE V-8 from Carroll Shelby Engine Company. The engine uses an aluminum block and heads and is topped by an 850-cfm Holley HP carb. The interior looks the part of a vintage Cobra, but the shifter is linked to a five-speed manual. 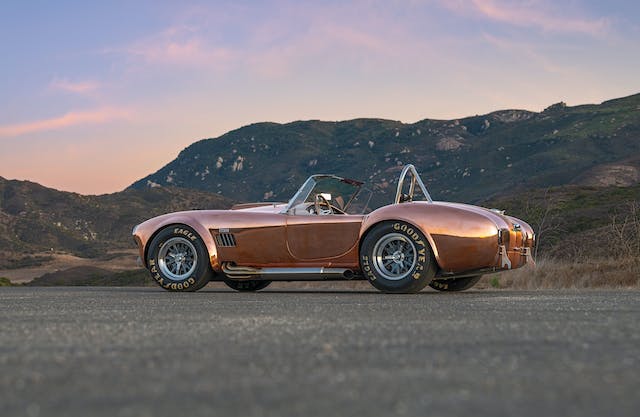 Difficult to form, copper work hardens as it’s bent or hammered, making this Kirkham Motorsports bodywork all the more impressive. RM’s listing notes that the copper bodywork, which was made from 17 separate panels, is seamless to the eye not just from above, but from below as well. 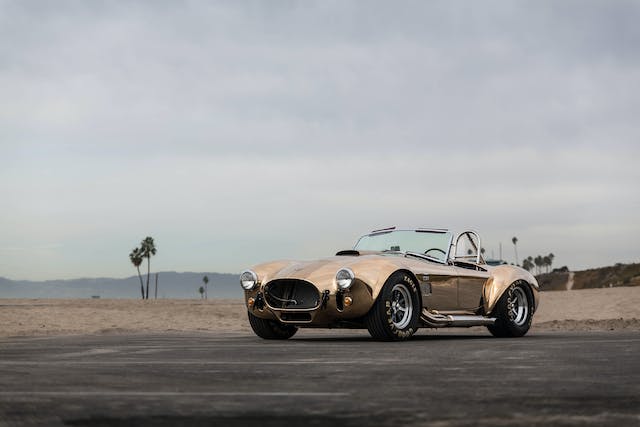 Featuring the familiar silhouette of a 427 S/C rendered in a unique medium, this Cobra wears a hand-formed body in bronze by Kirkham Motorsports. Like its aluminum and copper counterparts, the car’s bodywork is seamless and features brushed stripes. 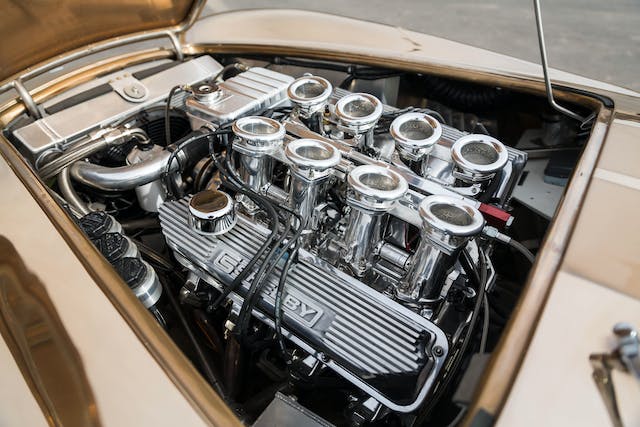 As if a gleaming bronze Cobra weren’t enough of a statement, lifting the hood reveals eight bell-mouthed stacks from a Borla fuel injection intake. Each of the eight 58-mm throttle butterflies feeds its own cylinder in the 511-cubic-inch Ford FE V-8. Carroll Shelby Engine Company built this beast to the tune of 650 hp and has the dyno sheet to prove it.

For those that are in the market, each of these three is up for sale, with the aluminum CSX 4428 priced at $385,000 and both the bronze CSX 4600 and the copper CSX 4602 priced at $475,000. Each of these is quite honestly more car than we could handle, but if price were no option … we’ve gotta say that the bronze would take the gold.

Get an insurance quote
A Story About
Share Leave comment
Read next Up next: Insider Insight: Will the return of in-person auctions crash Bring a Trailer’s party?