7 monuments to Shelby performance crossing the block next month

Few names are more synonymous with American racing performance than that of Carroll Shelby. The tenacious Texan was a skilled driver as well as an entrepreneur and had decades of success turning production cars into finely-tuned racing machines. He even got the chance to build his own vision from scratch.

In 2021, RM Sotheby’s is hosting a treasure trove of Shelby models at its Scottsdale auction. The collection highlights the wide range of Shelby’s contributions to the automotive world and ranges from a full-bore big-block Cobra to an early clay prototype of the Shelby Series 1.

Check out all seven cars on offer below. 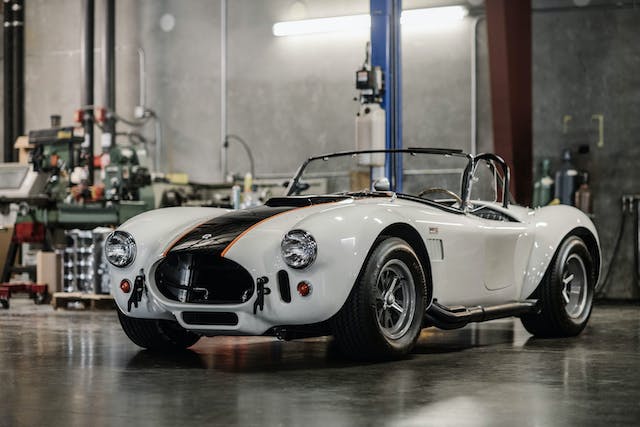 In 1965, Shelby was supposed to build 100 homologation cars to qualify the recently redesigned Cobra and its big-bore 427 V-8 eligible for FIA competition. The company made it just over halfway through the intended run of 100—a lot farther than rival Ferrari made it with its 15 copies of the 275 LM. This continuation car was built in 2013 using an existing 1965 Cobra chassis number and is intended for race use only. If you’ve ever dreamt of running an FIA-spec Cobra with an aluminum body and 427 side-oiler, this 10-mile example is as close as you’re likely to get to the real thing. 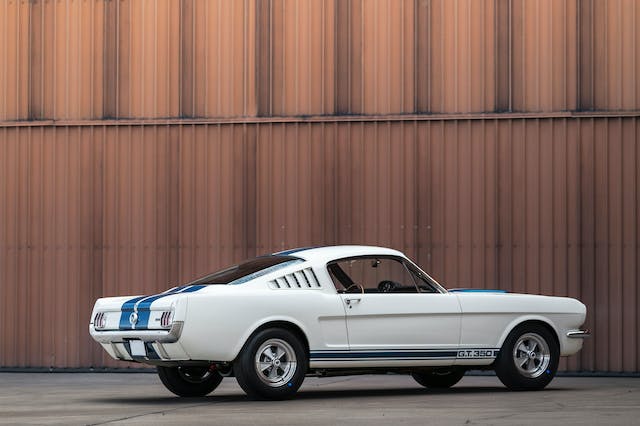 First-gen Mustang fastbacks are among the most sought-after pony cars, and none are more desirable than a Shelby GT350. This is number 47 of the 562 built by Shelby for 1965. That means it was built in the original Venice shop before Shelby’s move a few miles south to its facility by LAX . Of course, it comes with the tuned 289 V-8 and a suspension meant for the track.

This one has been recently restored and then cosmetically touched up in 2019, so it’s still looking Venice-fresh. Its chock-full of all the Shelby goodies you’d want, too, including the 16-inch wood steering wheel found on early-production GT350s and the fiberglass gauge pod with the original oil pressure gauge. 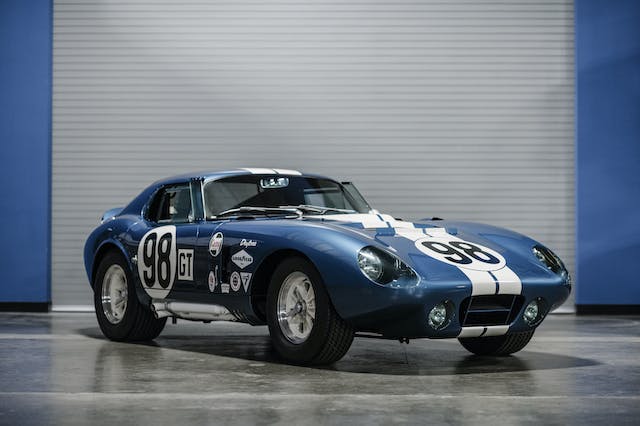 Just six original Daytona coupes were built after Shelby employee Pete Brock was tasked with sculpting a car body capable of keeping up with the sleek Ferraris on the Mulsanne Straight at Le Mans. The design remains one of the most beautiful race cars ever penned.

Like the originals, this continuation Daytona coupe features an aluminum body and a gorgeous Ford small-block to match. The engine’s topped by a quartet of Weber downdraft carburetors so that each intake port gets its own throttle. The sparse interior won’t do much to dampen the engine sound, but that’s a feature, not a bug. 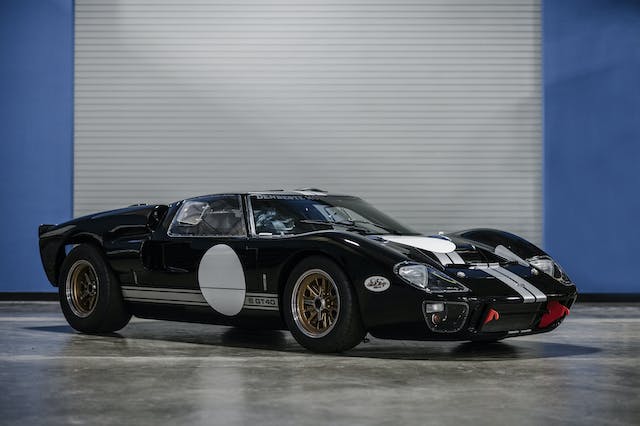 This 2008 build from Superformance celebrates Carroll Shelby’s 85th birthday. It’s the first of 85 built and the color scheme is a homage to the GT40 campaigned by Chris Amon and Bruce McLaren in 1966. About 90 percent of the parts used in the run of 85 are interchangeable with the originals—like the steel roof, complete with Gurney bubble—although Superformance did make some modern upgrades. For example, there’s galvanized steel in the chassis for corrosion resistance, plus air conditioning and Wilwood brakes—and some serious hot-rodding on the Ford FE engine. The mill now displaces 511, rather than 427, cubic inches and output is nearly 600 hp. 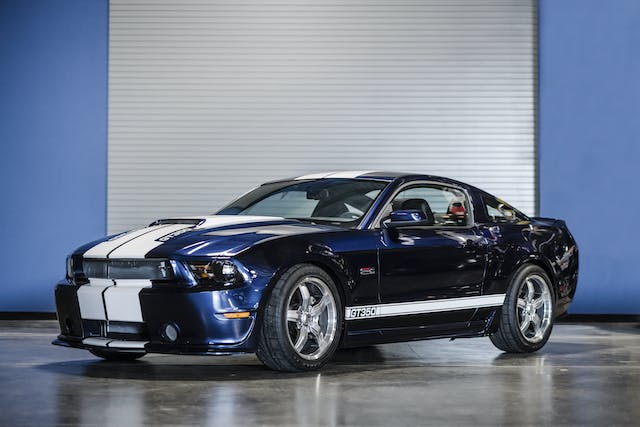 Just like it did in the ’60s, Shelby built its 2012 GT350 with an improved suspension and added a new front fascia that also helped it breathe on the track. This 5.0-liter-powered Mustang is equipped with the optional six-speed automatic and benefits from a host of Shelby upgrades, including 19-inch Cragar wheels, Wilwood brakes, and Ford Racing anti-roll bars and adjustable caster-camber plates. Scoops on the rockers and fascia feed brake cooling vents. This pristine example has fewer than 1000 miles on the odometer. 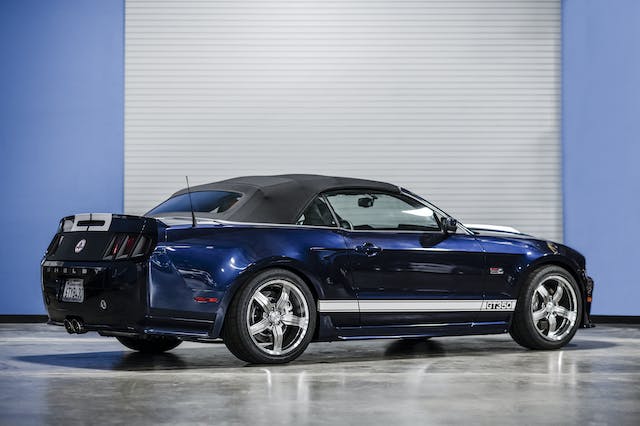 If open-air cruising is more your thing, this drop-top Shelby GT350 may be up your alley. Nearly identical to the coupe we just mentioned, this one has even fewer miles on the odometer—just 290. Since 2012 marked the first time a Shelby Mustang convertible was offered since 1970, this one may have additional collector appeal. 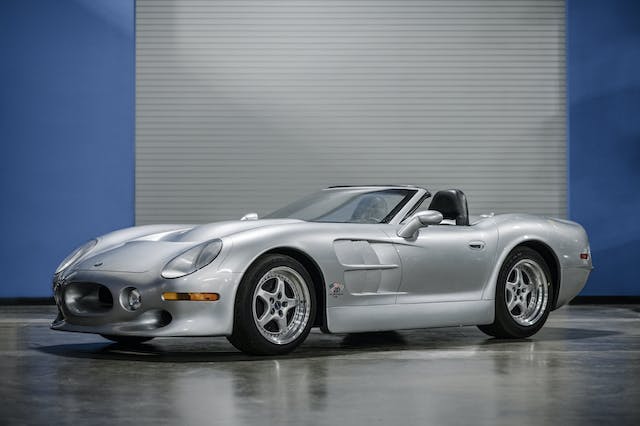 Of the road cars bearing the Shelby name, the Series 1 possesses the most Shelby influence; it wasn’t based on any existing platform or OEM design. The production model would go on to use a 4.0-liter Oldsmobile version of the Northstar V-8, but this design model has no powerplant. It’s an early clay model that looks every bit like the real thing, but the doors, hood, and trunk don’t open. For those that have the room in their collection, and an interest in automotive design, this Series 1 model may be a bargain; it represents so much of Carroll Shelby’s vision of a proper sports car.

Buying and Selling Could this barn-find Lincoln Continental become the next six-figure sweetheart?
Sajeev Mehta

Buying and Selling Our tame fighter pilot wonders: Should this Jeepster be sent to the boneyard?
Josh Arakes