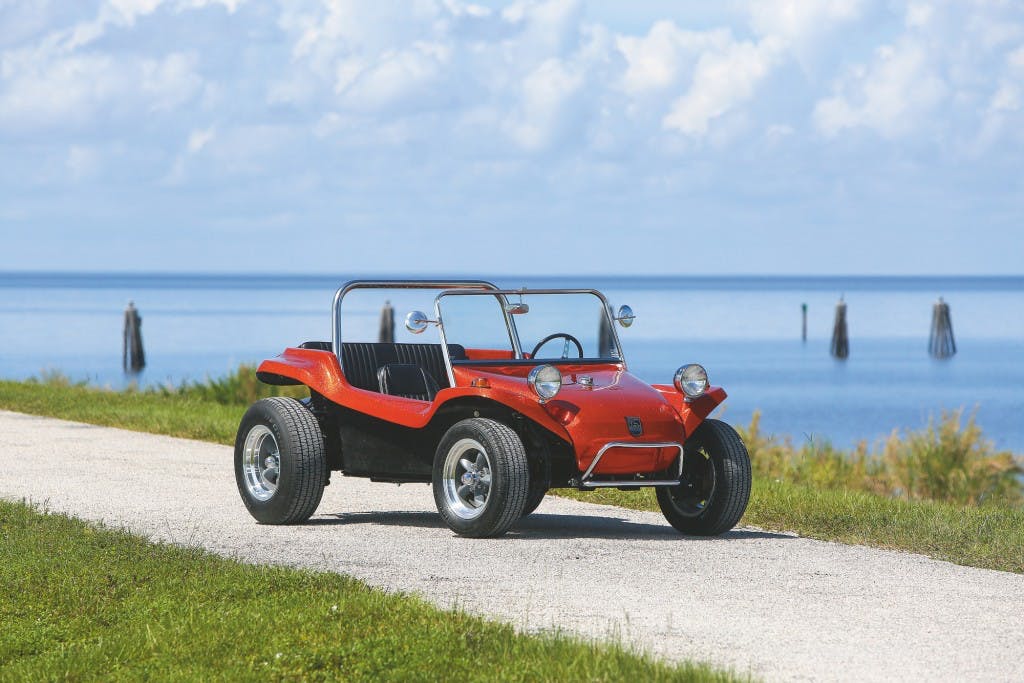 Three years ago, when Freeman Thomas walked away from a gig as Ford’s director of strategic design, it looked like the ambitious design dynamo behind the New Beetle and Audi TT had finally run out of challenges. Turns out he was just looking for a taller mountain to climb.

Earlier this month, Thomas was named CEO of the reconstituted Meyers Manx company founded by Bruce Meyers, the surfer dude-turned-sand rat who launched the dune buggy craze in 1964. Although Thomas is coy about the future, he’s already got plenty of sketches for Manx follow-on vehicles in his design journal.

“Meyers Manx has been in my head ever since I was working at Porsche,” he says. “I have a catalog of concepts and ideas for new and unique segments that only a Meyers Manx can be in. Its DNA is so powerful. It still has that disruptive, carefree mindset that created so many great innovations and movements. So we can go left when everybody else is going right.”

At the same time, however, Thomas insists that he isn’t going to do anything to screw up the original Manx—the fiberglass-bodied, VW Beetle-based runabout that conquered Baja, entranced Steve McQueen, and was a treasured plaything of the Beach Blanket Bingo set. He plans to make it more efficient and accessible without losing the purity of Meyers’ iconic creation.

“Bruce is an artist and a visionary,” Thomas says. “He made a marriage of brilliant engineering and design. But the magical part is that he built a whimsical, endearing object that makes you smile when you look at it. That puts him on the level of an Alec Issigonis [creator of the original Mini] or an Erwin Komenda [credited with the Porsche 356].”

Or a Freeman Thomas.

Few designers have enjoyed a more storied—or charmed—career than Thomas. Even though he recently turned 63, he still exudes the energy and enthusiasm of a millennial during a Tweetstorm. And when he gets revved up, it’s easy to picture the precocious kid raised in Southern California, where he and boyhood friend Jeff Zwart—yes, that Jeff Zwart—would furiously pedal their Sting Rays through tree-lined suburban streets in search of cool cars to gawk at.

A car geek virtually from birth, Thomas did a tour of duty in the Air Force before his future was revealed in a Road & Track article that mentioned the transportation design program at ArtCenter College of Design. “I had no idea you could earn a living drawing cars,” he recalls. “So I got the address and went up there, and it was a revelation—like finding your home. I said, ‘God, I’ve got to get in here!’ I didn’t have a portfolio. I had no art or design training at all. So I took a night class in industrial design to build a portfolio, and during those three months, I worked like a madman because I wanted to get in so bad.”

At ArtCenter, Thomas was identified as a star-in-the-making and mentored by Strother MacMinn, a design colossus who could trace his lineage back to Harley Earl, the father of American automobile design (and the tailfin). After leaving the school, Thomas did a stint at Porsche, which had tried to hire him even before he graduated. With seven years of German experience under his belt, he returned to the States, searching out new opportunities.

I first met him when we were both lowly freelancers at a fledgling car magazine, Sports Car International, but even then, it was obvious that Thomas was destined for great things. Then-editor-in-chief Mark Ewing recalls: “Colored markers in hand, Freeman would enter what his wife called ‘design coma.’ She once said Freeman stared right through her and said, ‘Blue. What a cool color,’ like some beatnik poet with a set of bongo drums. I love Freeman for his abilities and the fact that he still has the wonder of a child. But he is one wacky dude.”

While knocking out styling analyses for SCI, Thomas taught classes at ArtCenter and designed the Panoz AIV Roadster, which was a cross between a Cobra and a Lotus Super Seven. Shortly after the Volkswagen Audi Design Studio opened in Simi Valley, Thomas was hired by J Mays, who would become his great patron and collaborator. Together, they created the Concept One, which became the New Beetle. Next came the Audi TT, at which point Thomas was officially anointed a name-brand designer. Freeman would later run the DaimlerChrysler Pacifica Design Center and eventually become Ford’s chief swami of advanced design.

Yet even as Thomas sprinted up the corporate ladder at two of America’s Big Three car companies, his personal taste never strayed far from his German roots—VW Beetles when he was a kid, and Porsches ever since. “Porsche is like a religion for me,” he says. “It’s something that I have been passionate about my whole life.”

While they were kids, he and Zwart used to linger at a nearby driveway just so they could hear the sibilant snarl of the 911 a neighbor drove home from work. Zwart went on to direct Porsche commercials and race 911s up Pikes Peak. Meanwhile, Thomas co-founded the semi-secret, quasi-mythical car club, R Gruppe, devoted to performance-modified Porsches with elegance and/or panache.

Although Thomas no longer plays an active role in the club, he still serves as what he calls “a philosophical compass” and owns thee Porsches—a Viper Green 911S coupe, a 914/6 sleeper that makes 235 horsepower, and a 1956 Speedster. “That’s my Zen car,” he says of the 356. “You don’t want to drive it too fast. My wife and I take it out all the time, just go up into the canyon to smell the roses, if you will.”

(Thomas also owns a 1993 Caterham Super Seven with a go-fast drivetrain, a Euro-spec 1972 Ferrari Dino 246 GT that he describes as “a driver”, a boxy Vanagon from his days at VW, and a time-capsule first-generation TT—the last one earmarked for California—with 32 miles on the odometer. Oh, and there’s an unbuilt Manx that he hasn’t found time to assemble. He recently sold his “stanced” 1972 911T that wears its original tangerine paint.)

Fittingly, Thomas went back to work for Porsche after taking early retirement from Ford. Well, not for Porsche AG but for Alois Ruf, the Bavarian tuner who’s been modding Porsches, with factory approval, for more than 40 years. As every 911 fanboy knows, the original RUF CTR Yellow Bird famously won R&T’s “World’s Fastest Cars” shootout in 1987, maxing out at a mind-bending 211 mph. For the new CTR and the production spinoff, dubbed the SCR, Thomas persuaded Ruf to leverage the latest in automotive technology rather than merely building the ultimate tuner version of the latest 911.

At the same time, Thomas was convinced the new car ought to embrace the shape and styling essence of the first Yellow Bird even though the wheelbase had been extended (so the engine could be moved forward) and the frontal area had been minimized and the roofline lowered to improve aerodynamic efficiency. Also, he was determined to retain the proportions of the original Carrera rather than bulking up to mimic a wide-body Turbo. “Some people would say that you went to a lot of trouble to make it look the same,” he admits. “Trust me, that’s the hardest part—making it look better while keeping the same basic silhouette.”

To say that shifting gears from a RUF 911 to a Meyers Manx seems like a stretch is an epic understatement. But Thomas had grown up around the effervescent buggy culture of Southern California, so he appreciated the appeal of the Manx. Also, during his time running the VW Audi Design Studio, he’d bonded with Meyers, whom he considers a hero of automotive design.

Meyers—a formally trained artist who’d been a hot rodder, a survivor of a kamikaze attack, a surfboard shaper, a deep-water sailor, and the owner of a South Seas trading post—built the Manx prototype in 1964 in a wooden shed in Newport Beach then tested it on the Pacific Coast Highway. With a sensuously sculpted one-piece fiberglass shell attached to a shortened Beetle floorpan, the dune buggy was nimble, robust and irrepressible.

“It thumbs its nose at tradition,” Meyers says. “It’s leaning forward, and it looks like it’s about to jump out of the funny pages. It sends a message, and that message is Join me. I’m having fun.” Or as Thomas puts it: “A Meyers Manx is really a sports car that goes off road.”

The Manx established its credibility by setting a record for the fastest trip down the Baja Peninsula in 1967 and then, a few months later, winning the inaugural Mexican 1000 Rally (now known as the Baja 1000). Its next trick: reaching a nationwide audience while being driven by Steve McQueen in The Thomas Crown Affair and Elvis Presley in Live a Little, Love a Little.

Meyers sold kits for about 7000 Manxes and their derivatives. Unfortunately, his designs were so easy to copy that unscrupulous rivals sold at least 100,000 knockoffs, and he was driven out of business in 1971. It wasn’t until 1999 that he and his wife, Winnie, relaunched the company. They’ve been building cars and selling kits ever since.

Although Meyers is an indomitable force of nature, he’s also 94, so he’d been entertaining offers to sell the company for several years. Thomas had long been intrigued by the possibilities of the Manx brand, and coincidentally he’d just formed a design consultancy with Phillip Sarofim, a young venture fund capitalist whose stunning car collection includes, yes, a Meyers Manx. The rest of the story writes itself; earlier this month, a deal was brokered with Sarofim’s firm, Trousdale Ventures, to continue Manx design and production.

Bruce will remain in the loop as long as he likes, Thomas says, while Winnie continues to look after the vibrant Manx Club. Sales manager Kory Kratz will join the new team in a 7500-square-foot building in Oceanside with lifts, storage racks and a glassed-off area that can house offices and a design studio. “We’ll be able to do soup to nuts there,” Thomas says. “We’ll have the ability to re-create everything that was ever created and also create new things.”

More than anything, Thomas seems energized by his escape from the corporate straitjacket he wore during his years working for the major auto manufacturers. “We don’t have to go through board meetings,” he says. “We’re not going to be doing focus groups and consumer clinics and things like that to second-guess ourselves. We are going to move quickly, we are going to move creatively and we are going to move disruptively.”

The company, in other words, will be a lot like the vehicles it sells.

Get an insurance quote
A Story About
Share Leave comment
Read next Up next: Rides from the Readers: 1959 Ford F-100 street rod