Did GM steal the innovation that made the LT1 possible? The decade-long legal battle.

Chevrolet’s LT1 V-8 was a major step forward for General Motors. From 1992 to 1997, the LT1 helped pull GM out of the Malaise Era, updating the nearly half-century-old small-block engine for modern use. The General dubbed this V-8 the second-generation small-block, but in reality, the engine shared a great deal with the original Chevrolet “mouse motor” introduced in 1955. The $100-million revamp was the pinnacle of old-school Chevy engineering, a host of simple solutions and tiny improvements executed in pursuit of power and efficiency.

One of those developments was reverse-flow cooling—the practice of circulating coolant from an engine’s cylinder heads into its block, rather than the other way around, to reduce the risk of detonation. This feature became the central focus of a decade-long legal battle between GM and one of the firm’s subcontractors. The impact of this engineering feat is evident in the small-block engines currently used in everything from full-size trucks to the C8 Corvette, yet few know that the technology embroiled GM in a corporate-espionage scandal.

The Malaise Era presented a particular set of challenges for America’s muscle cars and high-output V-8s. Automakers were hit by a series of new limitations, including tighter emissions regulations and the challenge of unleaded fuel. Detonation—preignition due to a variety of undesirable factors—was common with these engines. Aluminum cylinder heads alleviated things by more quickly transferring heat into coolant, but there were other problems. The issue came to a head in the late 1980s, during development of the LT1 engine used in the C4 Corvette. In particular, coolant tended to boil around the combustion chambers, reducing the V-8’s ability to extract heat from its heads. These steam pockets were problematic enough that GM’s engineers sought expertise from one John Evans, founder of Evans Waterless Coolant.

While much of the LT1’s internal hardware is shared with the original small-block, the new engine featured revised cooling jackets and a front-mounted Optispark ignition system. The latter was driven off a small PTO drive at the front of the camshaft. The intake manifold was now a short-runner design, sitting on raised intake ports for improved high-rpm breathing.

The LT1’s reverse-flow cooling feature was another big development, intended to reduce combustion-chamber temperatures and mitigate detonation in this high-compression engine. The stubborn steam-pocket issue, however, remained throughout development. Ultimately, small-diameter “steam vents” were added at the back of the cylinder heads to allow trapped air to escape. Evans was the brain behind this solution.

John Evans ran a shop in Sharon, Connecticut, near Lime Rock Park. He served as a regular consultant for GM engineers who visited the track to see how racers were using their creations. Like many such relationships in the industry, this one was often mutually beneficial, with engineers handing down parts and resources in exchange for data and development. Evans had worked on cooling solutions for General Motors since 1979. With the C4, he was tasked with sorting a solution for the overheating troubles in March of 1989, during LT1 final testing.

At the time, GM was evaluating Evans’ “non-aqueous” coolant as a remedy for the LT1’s steam-pocket problem. According to Evans, the engineers were having significant problems keeping the high-output LT1 cool underneath the Corvette’s low-slung hood, and early testing of the upcoming Camaro and Firebird had shown similar problems. 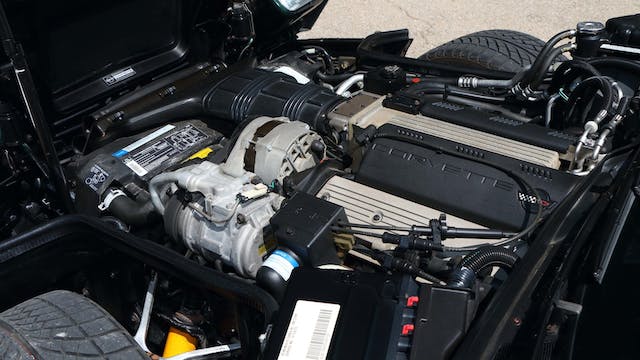 Just ahead of a scheduled hot-tunnel test, where a Corvette would be placed into a climate-controlled chamber and subject to worst-case conditions, General Motors asked Evans to demonstrate another of his solutions: reverse-flow cooling. The practice had been a holy-grail technology for OEMs, but it had yet to meet production use, as vapor lock presented a major challenge. Evans had figured out that the solution involved placing a small-diameter venting hole in the cylinder head, instead of the thumb-sized vents suggested by conventional wisdom. “It was counterintuitive,” he told Fortune. “Everyone else was using a big hole, figuring it would allow more vapor to escape faster. I made it smaller, and it worked.”

This was Evans’ trade secret, but he had yet to patent it. As a result, he mandated that GM’s test be done under “black-box” conditions, a situation wherein GM could see his design’s test results but not the mechanism itself. The two parties came to an agreement on two tests: one would judge the performance of his waterless coolant, and the second would evaluate his steam-vent design paired with reverse-flow cooling.

The first hot-tunnel test went off without a problem in March of 1989. On the second test, curiously, a General Motors engineer told Evans that the hot tunnel was malfunctioning, and that the test would resume the next morning. Evans was understandably worried about the trade secrets he was being told to leave behind, but an engineer assured him that both facility and car would be locked up.

The next morning, they returned to the testing cell and wrapped up the black-box results. Evans noticed something was amiss, and commented to GM engineers that a panel underneath the car, in the tunnel, had been left ajar. He was assured that there was nothing to worry about, that the panel had been removed for service. The tests concluded on March 17.

The issue with handshake agreements is that when things go awry, there’s no paper trail to back your claims. At the time, GM corporate had begun auditing relationships of this nature, leaving Evans’ company in the lurch as unpaid bills were put on hold. According to Evans, he had only undertaken the black-box testing under the pretense that doing so would grease the wheels of payment for $804,000 he was owed in consulting fees. According to Fortune, GM’s internal auditors later attempted to strike a deal: The company offered to settle Evans’ unpaid invoices in exchange for the rights to his cooling innovations, including his reverse-flow design. Evans scoffed at the offer, and GM returned months later with a counter: $150,000, but no rights to his designs. With bill collectors knocking as he leveraged the kitchen sink, the paycheck looked like a lifeline, and Evans took the offer in 1991.

This is where things went off the rails. Evans thought the situation was over. He presumed that the payoff covered only the work that he had done for GM, not the rights to his ideas. But in the fall of 1991, a story in a trade magazine extolled the virtues of an industry-first reverse-flow cooling system—one used by General Motors, in the new-for-1992 LT1 small-block.

Evans applied for a patent in July of 1992, citing foundational innovations he had patented in 1985. The patent was awarded in October of 1993, just before Evans leveraged that newly minted paperwork in a 1994 lawsuit against GM. In that lawsuit, he alleged that the company had stolen his trade secrets and implemented them in the LT1, making him due royalties for the engine’s production use.

General Motors hinged its defense on a few key factors, namely its interpretation of contracts signed with Evans Cooling Systems, which GM suggested released any innovations for production use. The timing of the steam-vent discovery, along with the gap between Evans’ awareness of the violation and GM’s launch of the LT1, was hotly contested in the trial.

While the contractual argument was muddied by the casual nature of the two parties’ business relationship, another critical component was General Motors’ claim to have designed its own reverse-flow cooling system, pinhole steam vent included, a year prior to that 1989 hot-tunnel test. The problem? Part of that evidence was fabricated in an elaborate hoax. General Motors lawyers pointed to a 1988 company sketch describing the contested cooling innovation, supposedly found in an engineer’s toolbox. This “forgotten” sketch was submitted, along with a crude prototype, by John Juriga, an LT1 engineer. The story went that Albert Schaefer, a machinist who had worked with Juriga, discovered the sketch after his retirement. Before trial in 2003, Juriga confessed that he had faked the document while under pressure from GM lawyers. Evans’ lawyers confirmed this by finding, on the faked sketch, an imprint of a date that had been written on a sheet of paper laid over the sketch. The sketch had actually been created in 1992.

Evans’s lawyers had also discovered that hoses used to construct a “1988” prototype part used in evidence were date-coded much later, suggesting that the prototype had actually been built after the fact (GM later testified that it was a recreation of the steam vent assembly). Schaefer had been cooperative with the lawsuit until Juriga’s admission of forgery, at which point he invoked his fifth-amendment right to deny questioning during trial.

Evans didn’t win the lawsuit. The judge acknowledged fraudulent evidence but cited the two parties’ various intellectual-property agreements through the ’80s. The vented-reverse-flow cooling system was ruled to fall under earlier agreements, even though GM hadn’t explicitly demanded that Evans develop the tech. The judge also concluded that a Corvette preordered by a West Bloomfield, Michigan, dealership in 1991 predated Evans’ patent filing by enough time to negate any claims made on that specific technology. Evans tried to include the LT1’s successor, the LS-series V-8, in his claim—that engine used similar steam vents—but GM’s lawyers successfully argued to exclude the LS from the suit. The company was ultimately forced to cover Evans’ attorney fees, but its engineers were allowed to utilize steam vents in successive generations of small-block V-8s, including today’s LT-series.

These days, Evans’ company successfully produces waterless coolant for motorsports applications, while General Motors thrives on a fleet of durable V-8s using his invention. If nothing else, the story is a cautionary tale for entrepreneurs and inventors. John Evans has since admitted that his ultimate failure lay in not taking the business side of his work more seriously. He let General Motors become his sole client, and while the trackside conversations were great for securing potentially high-paying development work, it was easy to get comfortable. Once things soured and his invoices were left in the dust, General Motors was holding all the chips.