American automakers are currently waging a muscle car horsepower war, but that’s nothing new. While it’s supercharged V-8s in the Challenger Hellcat/Redeye, Shelby GT500, and Camaro ZL1 doing battle today, in the V-8 arms race of the 1960s, displacement was king. Atop them all, Chevrolet’s 427 GM’s line of muscle car V-8s reigned.

Even inside GM, brands battled for horsepower superiority, with Pontiac and Chevrolet firing new salvos of V-8-powered NASCAR and drag-race packages back and forth. Pontiac’s 389 was countered by the Chevy 409, which was met by the Super Duty 421. Chevy’s 427, in various configurations over two generations of big-block, was the brand’s answer during the ’60s. It was Chevy’s most powerful engine for much of the muscle car era’s peak years, earning it a solid reputation on the strip, track, and street. It’s certainly worthy of tribute, especially today, on April 27 (4/27).

The 427 that we all know from the COPO Camaro and L88 Corvette wasn’t the first 427 big-block from Chevrolet. With a horsepower war raging in 1962, Chevy knew that its first generation of production big-blocks would need to be revamped to keep pace with the market. A new iteration of big-block was developed to replace the W-series of engines that had given us the 348 and mythical 409. It kept the same 4.84-inch bore spacing as the 409, added traditional square decks, and added splayed valves with “semi Hemi” combustion chambers.

That “mystery motor” displaced 427 cubic inches and debuted in the 1963 NASCAR American Challenge Cup in a pair of 1963 Corvettes prepped by Mickey Thompson. The wet weather proved to be too much for driver Junior Johnson, who deferred to Bill Krause. Rex White and Thompson shared driving duties in the other 427 Corvette but suspension problems ended their run. A Pontiac won the race, followed by Krause in the 427 Corvette and A.J. Foyt in a small-block Corvette.

The mystery motor made its NASCAR Cup debut shortly after. The engine powered both Junior Johnson and Johnny Rutherford to wins in the two 100-lap qualifying races. Ignition trouble and new engine teething issues plagued the engine during the 500, and Ford swept the podium. The best finish by a Chevy 427 was Rutherford’s ninth-place.

Just a few months later, the W-motor got its own 427-cu-in version in a limited-production run of drag racing Impalas. The 1963 Z11 Impala was a late addition to the model run, and only 50 were built. They were the first production Chevrolets to be powered by a 427 and the 430-horsepower engine made them a menace on the drag strip in Super Stock competition.

The mystery motor set the stage for the Mk IV big-block that would enter production in 1965 with the 396, followed soon by the 427. Those ‘60s power plants ushered in a generation of big-block that is still the basis for the quickest and fastest street cars in the world and the most desirable engine for many a Chevelle, Camaro, and Corvette fanatic.

Even after the Mk IV big-block ended its run in cars it soldiered on in trucks and evolved into the Vortec 454 and eventually the seventh-generation big-block, the 496-cu-in Vortec 8100. Chevy installed its last big-block in a production truck in 2007, but by then at least part of the big-block’s legacy had transferred to the small-block.

Chevrolet resurrected the vaunted 427 name and emblem for the LS7, which debuted in the 2006 Corvette Z06. With a 4.125-inch bore and 4.0-inch stroke, it’s the largest small-block V-8 from Chevrolet, actually displacing 427.8 cubic inches.

The LS7 bottom end used a forged crank for strength and titanium rods to trim weight. The LS7’s heads also used titanium, with massive 2.20-inch intake valves made of the exotic material to reduce weight and help the valve springs keep the valvetrain in check as the engine spun up to its 7,000-rpm redline. Those cylinder heads needed large valves to feed the big engine. The intake ports’ tremendous flow numbers, exceeding 350 cubic feet per minute, are impressive. Equally impressive is the exhaust port, which flowed as much air as the best Gen I small-block heads did on the intake. It all added up to 505 hp, making the LS7 the most powerful naturally aspirated V-8 ever put into a Chevy street car.

The LS7 small-block was used in the C6 Z06, fifth-gen Camaro Z/28, Corvette 427 convertible, and the Australian HSV W427 Commodore sedan. A racing version of the 427 is also used in the COPO Camaro.

There are rumors that the next-gen Z06 will use a DOHC V-8 and far exceed the LS7’s power output, but it will be a totally different animal. For drag racing and stoplight-to-stoplight acceleration, there’s nothing quite like the sudden rush that comes from a tried-and-true 427. 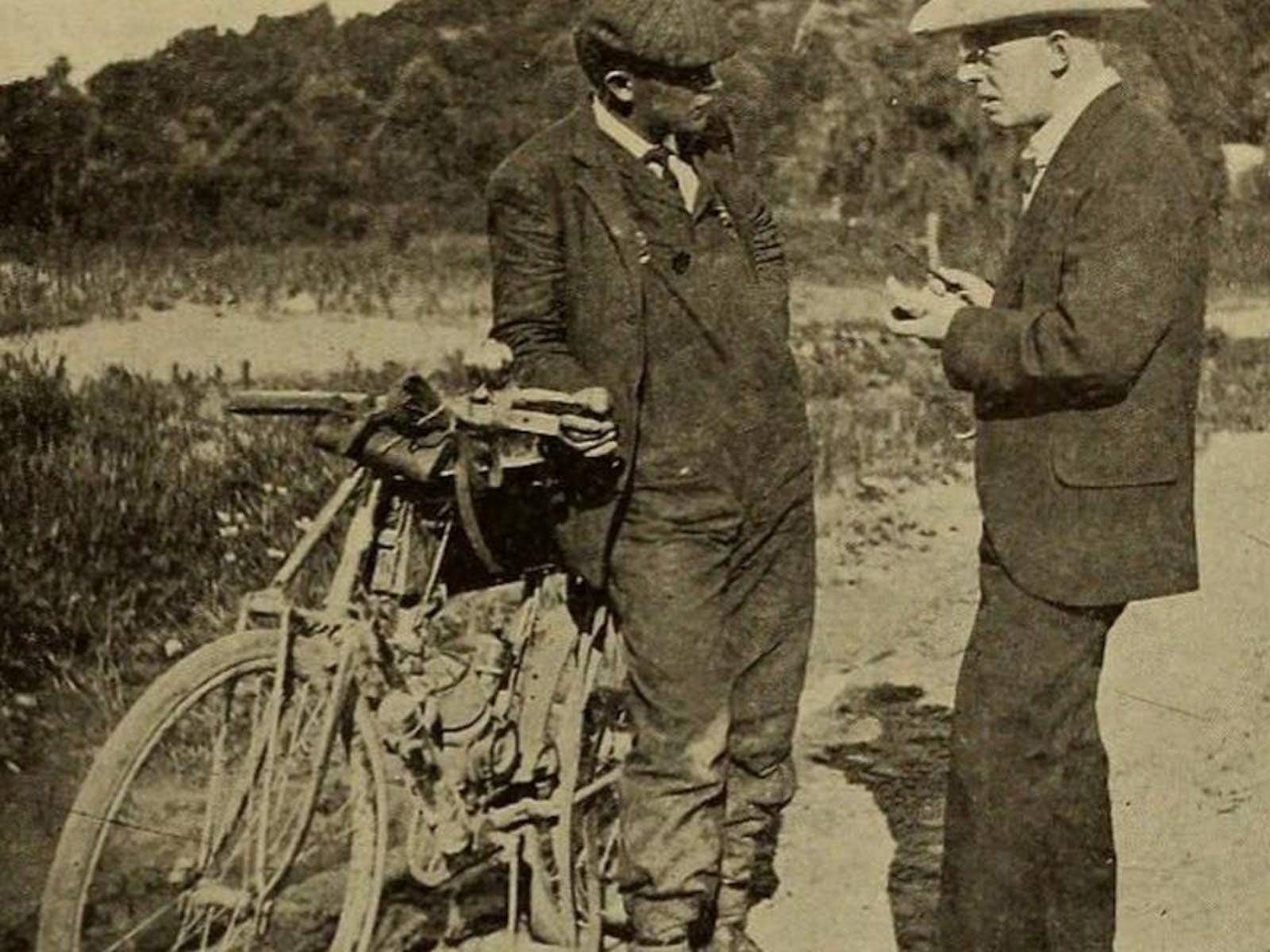 Automotive History The first motorized vehicle to cross the U.S. wasn’t a car—it was a bike
Jeff Peek