Possibly encouraged by the automobile tycoon himself, who cultivated his “everyman” public persona, most knew Henry Ford as a tinkerer. He had once made a gasoline engine in his wife’s kitchen and, another time, took an axe to the brick doorway in the shed behind his home on Detroit’s Bagley Avenue because his newly completed “Quadricycle” would not fit through the opening.

Despite—or perhaps because—of this grease-under-the-fingernails reputation, Ford was a respected member of Detroit’s industrial community when he took the Quadricycle on its first drive in 1896. It may have been the key to his friendship with Thomas Edison, out of which grew a professional partnership that birthed the very first battery-powered Ford, a vehicle that has been nearly lost to history today.

Though not formally educated, Ford had worked his way to the position of chief operating engineer of the Edison Illuminating Company of Detroit. Henry Ford was well-connected, so much so that the same year he would accompany his boss, the president of the local Edison franchise, to New York City, where Thomas Edison’s top-level executives were honoring the inventor at a lavish banquet celebrating his 50th birthday.

The way the story goes, Ford’s boss had told Edison about Henry’s experiments with *gasoline-powered motorcars at that dinner. Intrigued, Edison asked that Ford be seated next to him—the “Wizard of Menlo Park” was becoming hard of hearing—and two men proceeded to discuss the relative merits of electricity, steam, and liquid fuels for powering personal transportation.

Though Edison was heavily invested in electricity, he was then skeptical about using the technology as the foundation for automobile or truck powertrains. Banging on the dinner table for emphasis, Edison agreed with Ford that liquid fuels were more practical.

Young man, that’s the thing; you have it. Keep at it. Electric cars must keep near to power stations. The storage battery is too heavy. Steam cars won’t do, either, for they require a boiler and fire. Your car is self-contained—carries its own power plant—no fire, no boiler, no smoke and no steam. You have the thing. Keep at it.

Just a couple of years later, though, Edison apparently changed his mind about electric cars. The Henry Ford Museum owns the battery-powered, front-drive, reverse trike that Edison developed between 1898–99. His lab had made a breakthrough in battery chemistry with the nickel-iron battery, which is still used for some applications today. It used a nickel-oxide cathode, an iron anode, and a potassium-hydroxide electrolyte solution. At the turn of the 20th century, nickel-iron batteries were far more durable than conventional lead-acid batteries; they could sustain many more charge/discharge cycles before failing. Tom Edison claimed a 100-year battery life and modern tests have confirmed those claims.

In 1903 Edison established the Edison Storage Battery Company to manufacture and sell his nickel-iron cells and started to promote them for transportation use. An EV skeptic just a few years before, Edison had changed his tune.

Electricity is the thing. There are no whirring and grinding gears with their numerous levers to confuse. There is not that almost terrifying uncertain throb and whirr of the powerful combustion engine. There is no water circulating system to get out of order—no dangerous and evil-smelling gasoline and no noise.

The two leading makers of electric cars, Baker and Detroit Electric, began to offer Edison batteries as an extra-cost option. Edison promoted endurance runs using his batteries, and he was photographed with a number of contemporary EVs as part of the marketing effort.

The same year that the Edison Storage Battery Co. was established, Henry Ford made his third effort at starting a car company, calling the venture Ford Motor Co. The third time proved the charm, as we now know: within just a few years, Ford was the largest automobile maker in the United States, allowing Henry to put the world on wheels by making a reliable, practical car that regular folks could afford—the Model T. Interestingly, the 1908 Model T had no battery at all. It was crank-started, and Ford developed a flywheel magneto system to generate power for ignition and lights.

While the Ford Motor Company was a success before the Model T, the T made Henry Ford one of the richest men in the world. In 1913, Ford sold almost 180,000 Model Ts, and the following year sales exceeded a quarter of a million units. Like his former employer and now good friend, Edison, Ford began to re-examine electric propulsion.

In late 1913, Ford, working with Ernest G. Liebold, his personal secretary and go-to-guy for getting things done, started a publicity campaign that today we’d say “went viral.” Reports and rumors started to appear in automotive trade publications and business newspapers like the Wall Street Journal that Ford was developing an inexpensive electric car to be sold alongside to the Model T. In what was undoubtedly a shopped interview with The New York Times in early 1914, Henry Ford personally confirmed the rumors.

Within a year, I hope, we shall begin the manufacture of an electric automobile. I don’t like to talk about things which are a year ahead, but I am willing to tell you something of my plans.

The fact is that Mr. Edison and I have been working for some years on an electric automobile which would be cheap and practicable. Cars have been built for experimental purposes, and we are satisfied now that the way is clear to success. The problem so far has been to build a storage battery of light weight which would operate for long distances without recharging. Mr. Edison has been experimenting with such a battery for some time.

As was his wont, Henry was exaggerating a bit when he said “cars,” since the historical record indicates that at the time of that interview, only a single experimental Ford EV had been fabricated. We know that car existed because there is a dated photograph in the FoMoCo archives of a rather crude electric car sitting on Woodward Ave., right in front of Ford’s Highland Park plant.

The prototype had an electric motor mounted inline and midships, in front of the rear axle. The batteries sat under the seat. Sitting at the car’s tiller in that photo was Fred Allison, an electrical engineer who designed the traction motor. Alexander Churchward, an executive at headlamp maker Gray & Davis, a Ford supplier, was responsible for the EV’s electrical system as well as the vehicle’s overall design. Sam Wilson, who had worked with Charles Kettering on Cadillac’s electric self-starter was in charge of mechanical componentry.

Ford may have exaggerated the number of electric cars he’d had built, but there is indeed a photo of a second prototype, dated 1914. In the photograph, Fred Allison is this time sitting behind a proper steering wheel; the prototype appears to be Model T-based, using that car’s frame, front and rear suspension, seat, and steering gear. The electric motor is connected to the driveshaft at the place where the Model T’s transmission would normally go. A bank of batteries sits in the engine bay, augmenting a bank of cells mounted under the seat. Eugene Farkas, who had done much of the design and engineering on the 1908 Model T, designed the chassis, using a worm-drive rear end that would later be used for heavy-duty Ford products like the Model TT truck.

In a May 1914 interview with Automotive Topics, Thomas Edison amplified the publicity campaign.

Mr. Henry Ford is making plans for the tools, special machinery, factory buildings and equipment for the production of this new electric. There is so much special work to be done that no date can be fixed now as to when the new electric can be put on the market. But Mr. Ford is working steadily on the details, and he knows his business so it will not be long.

I believe that ultimately the electric motor will be universally used for trucking in all large cities, and that the electric automobile will be the family carriage of the future. All trucking must come to electricity. I am convinced that it will not be long before all the trucking in New York City will be electric.

Liebold started planting stories. One held that Ford was buying a site just down Woodward Avenue from the Highland Park facility on which it would build the Edison-Ford EV. (There might have been a grain of truth hidden in the hearsay, since Ford did build its headquarters a few years later at the corner of Woodward and East Grand Blvd.) Another whisper put Edsel Ford, Henry’s only son, in charge of the project. The car was reportedly scheduled go on sale in either 1915 or 1916 with a pricetag between $500 and $750. (Even back, customers paid a premium for electric cars: The 1915 Model T Runabout was $390 and the Touring Car $440.) The EV’s range was rumored to be between 50 and 100 miles; and, as there was very little intercity travel by automobile 115 years ago, that range would have been more than sufficient for most motorists.

Conspiracy theorists like to believe that Ford and Edison were pressured by John Rockefeller and other oil interests to abandon the project. They also suspect that Rockefeller was behind Prohibition, seeking to suppress the use of alcohol as a fuel and protect his monopoly on oil after watching his earlier monopoly on kerosene for interior lighting disintegrate thanks to Edison and Westinghouse. Naturally, the now-vanished Edison-Ford EV isn’t immune to a few creative hypotheses, one of which holds that there was a suspicious fire at Edison’s Menlo Park lab.

In truth, though the fire was real, the experimental lab and the storage battery building were not damaged. Also, Edison had almost nothing to do with Ford’s project besides supplying the 100,000 or so batteries that Ford supposedly purchased for the project. Like the 427 Shelby Cobra, the Edison-Ford EV was developed in Dearborn. Finally, it’s highly unlikely that Henry Ford was behind any shady business at the Menlo Park lab: The two men were firm friends and maintained close business ties. Ford revered Edison.

Ford demanded that Allison, Churchward, and Wilson use Edison’s nickel-iron batteries to power the Model T-based electric car. The problem was that nickel-iron batteries have a high internal electrical impedance, which makes them impractical in a number of ways. While they can withstand a high number of charge cycles, they are very slow to charge. When in use, nickel-iron batteries can only discharge a limited amount of current in a short period of time. They also didn’t have the kind of energy density needed to power a vehicle.

Perhaps if Edison and his engineers had been more deeply involved, solutions to those problems might have been found, but all the development work took place at the Ford lab in Dearborn. The team working on the Model T-derived EV thus did something that probably wouldn’t have been done in Menlo Park: For demonstration purposes, they swapped out the Edison nickel-iron cells with conventional lead-acid ones. Somehow, Henry Ford got wind of the switch, had one of his infamous tantrums, and killed the project forever.

Henry Ford ended up spending $1.5 million on electric-car prototypes—almost $40 million in today’s dollars. While it’s a tiny fraction of the billions that major automakers are now plunging into EV research and development, Henry had also invested his ego in the project, and his subsequent loss of interest proved the true death blow. Ford Motor Company wouldn’t try to make another electric vehicle for almost a century.

Henry did end up buying Clara her own Detroit Electric, however, and Thomas Edison bought one too. Both were equipped with Edison nickel-iron batteries. 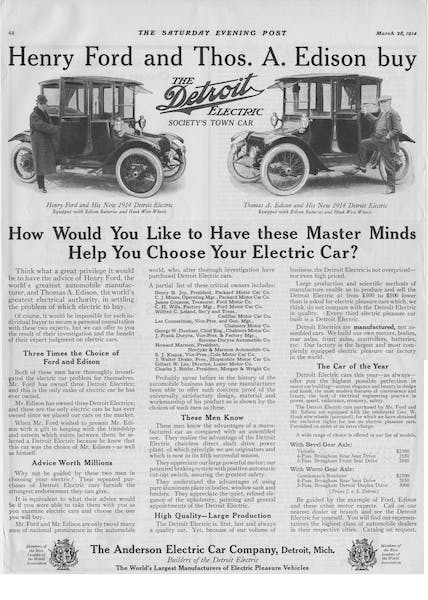 *The Quadricycle in fact ran on alcohol.

Get an insurance quote
A Story About
Share Leave comment
Read next Up next: Are happy days ahead for 1950s classics?