Broke our price guide: 5 wild sales from Indy and Amelia 2021

May has been an active month on the auction calendar. With the Amelia Island auctions and the massive Mecum sale at Indianapolis taking place simultaneously, there was a lot of action across the automotive landscape, from affordable classics to the very tip-top of the market. The collector market continues to be hot as ever, and there were several major results from the last two weeks of bidding that even leapfrogged values from our May 1 price guide update.

As always, it’s challenging to determine which big-time sales over expected values are pure outliers and which are early winds of change to a section of the market or model. Here are five sales from Indy and Amelia 2021 which caught our attention and are worthy of close examination. 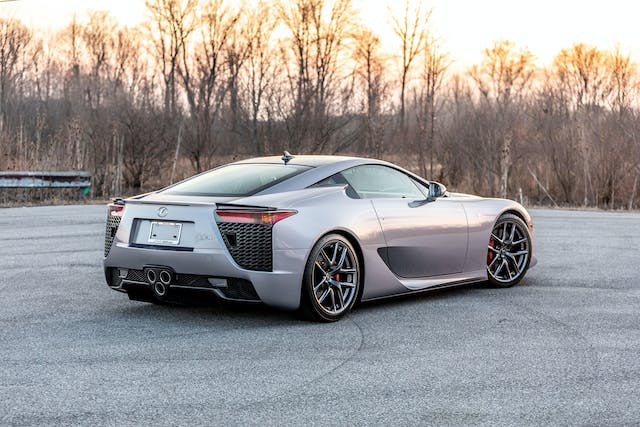 If there was any doubt that Lexus could build a car on par with the likes of Ferrari or Lamborghini, those doubts were swept away with the release of the LFA. The car was obsessively developed as a technological marvel and, even by today’s fast-moving standards, it looks and drives like a cutting-edge car. Like most supercars of the modern age, the LFA uses liberal amounts of carbon fiber and advanced electronics, but its soul-stirring showpiece is its 4.8-liter V-10 engine. Lexus claims that the 553-hp engine can rev from idle to its 9000-rpm redline in 0.6-seconds. Stats aside, the LFA’s high-pitched yowl harkens back to the old days of V-10 Formula 1 cars.

When new, the LFA cost upwards of nearly $400,000 and market values have remained at or above MSRP for a long time. Lately, asking prices for LFAs are up substantially worldwide—with the exception of the United States. So while this $720,000 sale might look like an outlier, when you look at the bigger picture it is arguably just a sign that the U.S. market is catching up with the rest of the world.

Back in January we included the LFA in our annual Bull Market List. If this trend continues, the Lexus LFA could become one of our very best predictions in Bull Market List history. 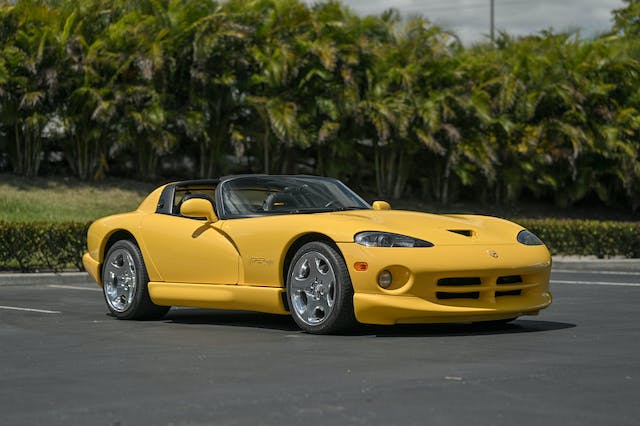 We have talked extensively about 2020 being the year of the Viper, but 2021 may prove a bit of a Groundhog Day situation for these cars. Dodge Vipers are still as ripe as ever, and appetite is particularly strong for exceptional-quality examples. Second-generation Vipers (1996–2002) are still among the most desired. This is the era where the Viper really came into its own; it dominated in motorsports and won the hearts of many a millennial who burned hours glued to Gran Turismo. And let’s not forget that the gargantuan 450-horsepower V-10 was the car engine equivalent at the time of a Saturn V rocket.

While the Viper GTS Coupe has been leading the charge, the RT/10 Convertibles haven’t enjoyed as much attention. In fact, the Viper is one of the few cars for which (like the Porsche 911) the coupe version is preferred. This Viper Convertible in Race Yellow didn’t get the memo, it seems. The searing drop-top sold above our #1-condition  (Concours) value of $59,800. Granted, the result is just a few grand north of that mark, but don’t let that diminish its importance. For one, Yellow is not one of the preferred colors among Viper collectors. Second, despite the low miles, this car isn’t a new-in-wrapper example, though it’s close. RM’s smash sale proves that strong auction appearances for Vipers are no longer isolated to Bring a Trailer, suggesting that appreciation for these all-American sports cars is widespread and stronger than ever.

An emerging player in the already-bumpin’ truck space, the Jeep J-series pickups are beginning to step into the spotlight. The J-series, especially from the late ’70s are some of the most outrageous trucks from the era. Packages like the Honcho, Golden Eagle, and 10-4 added a cool flair, as well—completely the “in” thing right now for classic truck and SUV enthusiasts. Add on top the fact that it’s a Jeep, a brand whose rabid following requires no extrapolation, and you have a real winner.

This particular J-10 looks fantastic. It has been completely restored, and the Golden Eagle package is quite striking. Everything about this rig screams late 1970s, from the graphics to the roll bar with KC HiLites off-road lighting. Jeep J-series pickups in this type of condition are hard to come by these days, and the sportier the graphics package the better. It captures an era of truck that is seriously popular with enthusiasts right now, which explains how this J-10 soared right past our #1-condition price.

It should be noted that there was also a $110,000 result for a J-10 Honcho at the same sale, but that Jeep is more of an obvious outlier. Mecum’s Golden Eagle better captures a glimpse of where the Jeep pickup market is at, previewing what may prove to be a healthy prices for truly exceptional examples of these trucks.

After a 24-year hiatus, Chevrolet brought back the Camaro SS. However, it was Street Legal Performance (SLP) building the SS, rather than Chevrolet. As with the SLP-built Pontiac Firehawk, you could walk straight into your dealership and order up your own Camaro SS rather than having to buy and then send it to the performance outfit. The SS package added 20 horsepower over the Z/28 on LT1-equipped cars from 1996–97. For 1997, SLP took delivery of a number of LT4 engines from the Corvette program, and these engines were good for 330 horsepower. Twenty-nine of these engines made it into Firehawks and an additional 100 were installed into Camaro Super Sports with the 30th Anniversary package.

For fourth-generation F-Body collectors, LT4-equipped SLP cars are among the most collectible. They’ve nevertheless remained relatively affordable; other low-mileage LT4 Super Sports have gone for less than half the result Mecum achieved here. (Of course, any SLP fan would contend that these cars have been ridiculously underappreciated for too long.)

The 30th Anniversary LT4 car offered at Mecum Indy certainly qualifies as a “time-capsule” car. While this $95,700 result, shattering the #1-condition value just below 40 grand, is a big one we likely won’t see repeated any time soon. It does, on the other hand, serve to poke the SS into the upper echelons of the market. So while your Z/28 might not be worth bundles more at the moment, an exceptionally well-kept LT4 car from SLP might be on the rise.

The Hemi Cuda is one of the pillars of muscle car royalty. Its rarity and power make it the object of envy for a great number of muscle car enthusiasts, and Hemi-equipped 1971 Plymouth Cudas are among the most desired. For 1971, only 108 Hemi Cuda Coupes are reported to have been produced. The one offered by Mecum in Indy is an extraordinarily well-optioned example with the Shaker hood scoop, billboard strips, Go Wing, and pistol-grip shifter. The car even comes with the original title, another indicator that this is a bonafide collector-grade Hemi Cuda, and it blew past our #1-condition rating of $378,000 to end up at $440,000.

Indy has always been a perfect test of the muscle car market, as it is the next biggest sale for this market segment outside of Kissimmee and Scottsdale. What we’re seeing here is that muscle is here to stay for a while, and Hemi cars are leading the charge again. Since the January auctions, the muscle car market has been coming back to life and the success of a blue-chip model like this in Indy represents more evidence that this trend is sustaining. Our data indicates that values for MOPAR muscle lagged a bit in the first quarter of 2021, mostly due to a lack of cars offered, but this latest round of sales at Indy proves that the same activity we saw from GM cars since the start of the year is not isolated to the General.

Maintenance and Tech The 6 most complicated restoration steps
Kyle Smith

Get an insurance quote
A Story About
Share Leave comment
Read next Up next: Review: 2021 Land Rover Defender 90 First Edition