RM Sotheby’s wrapped up its “Open Roads, Fall” online auction last week, and other than the nearly 80 vehicles on offer, there was plenty of automobilia and garage art to go around, too. The bulk of that haul was a fantastic trove of Ferrari memorabilia, including manuals and brochures from the 1950s and ’60s, original luggage sets, racing posters, and rare parts. If you’ve ever paid attention to sales of such objects, you know that the F-word in automobilia tends to attract more attention (and more money) than the average relic. So although there were several actual Ferraris in this auction, and a very early production Ford GT that sold for $522,500, these seven Prancing Horse pieces that caught our eye.

Oh, you had a Countach poster in your room when you were a kid? That’s cool, but there were much cooler kids out there, and they had Ferrari phones. Thirty-five years later, these old Testarossa telephones occasionally pop up on eBay and other collectibles sites, and even though this one attracted just one bid, $75-$100 seems to be about the going rate for others. It’s expensive for a 35-year-old piece of plastic and basic electronics, but it would definitely be a neat way to take calls in the garage. For reference, a real Testarossa sold in this online auction as well, for $170,500. That’s nearly 1900 times as expensive as the phone.

Nardi steering wheels have graced everything from vintage Porsches to NB Miatas, but the most famous Nardi is the classic wood-rim wheel with Ferrari’s Prancing Horse right there in the middle. It’s so recognizable that a company in Italy recreated it on these cool ceramic ashtrays. It’s nifty, but at $7500 (over twice its presale estimate and exactly $1000 per inch of diameter), we’d think twice about ashing our stogies in this thing.

Carmakers have worked with bicycle builders, and even built bikes of their own, for years. There have been Mercedes-Benz, BMW, Peugeot, and Porsche bicycles over the years, and Lotus even made an Olympic-level individual pursuit racing bike back in the early 1990s. One of the most famous and longest-lasting car/bike collabs, however, was between Colnago and Ferrari.

Colnago was already well known and respected as a frame builder and for its racing bikes by the time it started working with Ferrari in 1986. Taking advantage of Ferrari’s F1 experience, Colnago made some of the first bikes to utilize carbon fiber, and the two companies have produced numerous Colnago-Ferraris since then. Naturally, they were mostly speedier road bikes, but this is one of the few mountain bikes to come out of the partnership, and it dates from around 2001. Yes, it’s a 20-year-old bike that sold for $7200 and would likely make any actual mountain bike enthusiast audibly guffaw. At least it comes with a stand.

Made in Italy to look like a miniature Dino 246 GT, these ceramic decanters sold in the 1970s and came complete with rolling wheels. (Perfect for passing your favorite Chianti across the table!) We couldn’t find much info on them, but they have popped up on eBay before in various colors and they sold for similar prices to this.

While long outdated electronically, this Schumacher-era simulator is nevertheless a professional-grade setup with a carbon-fiber cockpit, realistic controls, and customizable cars, conditions, and tracks. And with the spoiler, F1 car-like shape and undisguised Marlboro livery, it looks just plain cool. $6300 isn’t cheap for a garage toy, but people have spent a lot more money on racing sims without this fascinating of a pedigree. 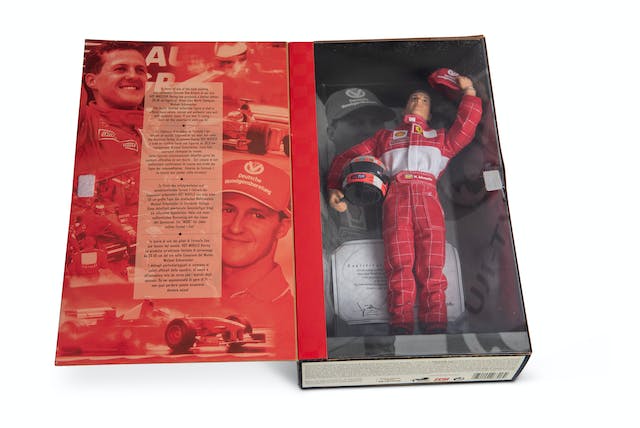 Barbie apparently started straying from her typical Corvettes back in the 2000s. This lot came as a set of three dolls with two Barbies (one dressed up in grid girl gear and the other with a fire suit and helmet) and one Michael Schumacher. He doesn’t just look like Ken in Ferrari clothes, either. If you squint it actually does look a little bit like the seven-time F1 champion.

Anybody out there with a sister knows that rare, limited-production Barbies can cost a pretty penny, so it’s no surprise that Barbie + Ferrari turned out to be an expensive combination here.

Girard-Perregaux makes some seriously high-end timepieces, and in 1994 the Swiss watchmaker began a 10-year partnership with Ferrari, a company that makes equally high-end automobiles. There were several limited edition Girard-Perregaux pour Ferrari models, mostly chronographs, and the F50 chronograph was introduced both to celebrate Ferrari’s 50th birthday and to accompany Ferrari’s 1990s hypercar: the F50.

Girard-Perregaux made one F50 wristwatch to accompany each of the 349 F50 automobiles sold by Ferrari. Then, Girard-Perregaux made another batch of 250. This one is part of that second batch; number 223 of the group, it comes day, date, month, moon phase, and year features. It also includes its gorgeous original winding display case. Some might consider the wrist-worn Ferrari to be better-looking than an actual Ferrari F50 which, by the way, is worth $2.1M.

Get an insurance quote
A Story About
Share Leave comment
Read next Up next: 2021 Ford Mustang Mach-E doubles-down on range promises with EPA certification