Ask Jack: He knows I can Box!

Allow me to start this advice column by giving you an outstanding example of why you shouldn’t take my advice: In 2005, I turned down a Porsche 993 Turbo in order to buy a leftover 2004 Porsche Boxster “550 Spyder Edition,” pictured above. The money would have been about the same either way. Had I bought the 993 Turbo, I’d have a car that now would be worth between $125,000 and $175,000 at any random auction I chose. The Boxster? Well, I sold it to a lovely lady three years ago for about a tenth of that. Clearly, I don’t know anything about buying and selling cars. But I do know quite a bit about Boxsters … which brings us to this week’s episode of “Ask Jack.”

A free parking space, a recent windfall, and a paid-off daily driver has led to me spending unhealthy amounts of time on Facebook Marketplace. I have discovered that 986 Boxsters can be had for $5-10K, and 987 Boxsters and Caymans can be had for under $20K.

How competitive are these cars relative to the rest of the market? These cars seem far more competitive in the market than any water-cooled 911 under $50K, which aren’t worth it when placed next to the great American sports cars of the last decade unless you’re a Porsche Guy: the car world’s version of Rolex Guys.

I understand that my labor and parts bills will be significantly higher than the American or Asian cars I’ve owned, but to what degree? I am aware of the IMS issue but there are kits to fix the IMS bearing on the 986, and I gather that IMS failure on the 987 is far rarer than they were on 986 and 996s.

If it helps to guide your advice, I live in Florida, and I don’t really care to work on my own cars except for car audio. I look forward to your reply.

Jacob wants to know if the 986 and 987 are “competitive” with other vehicles that can be had in the used-car market for the same kind of money. If he means “around a track” or in any contest of speed, then the answer is heck no. I have a Plymouth Neon that will put the hurt on pretty much any stock 986 or 987 short of a Cayman R around pretty much any racetrack you can name. You could pull the same trick with a Miata or a C5 Corvette or, based on recent results in my NASA region, a 1987 BMW 535i with rust holes in the floorpan. It is possible to make tremendous track pace with a mid-engined Porsche, if you are willing to spend tremendous money. Like $25,000 or more, on top of whatever you paid for the car to begin with. Incidentally, that puts you in the price range of a Corvette C6 Z06, which is an entirely different class of vehicle.

If, on the other hand, we are talking about what realtors call “curb appeal,” then the answer is … still no. There’s a reason Boxsters and Caymans sell for about half the price of a mechanically similar Porsche 911: They get no respect on the street, period, point blank. Believe me, I know. For twelve years, I had a 993 Carrera 2 in one garage bay and the Boxster in the other. The way people react to those two cars is night and day. In that way, the mid-engined cars are a lot like the 944 and 968 used to be: they’re Porsches, but they’re Porsches which require some explanation, or possibly justification, as to your ownership choice. Cue the infamous meme photo:

“OKAY, SO MY CAYMAN IS EXACTLY LIKE A 911 BUT IT ACTUALLY HAS A MORE DESIRABLE ENGINE POSITION, WHICH IS WHY PORSCHE ACTUALLY HAS TO PUT SMALLER ENGINES IN THEM SO THEY DONT EMBARRASS THE 911, LIKE THE NEW CAYMAN GT4, WHICH WOULD TOTALLY SMOKE A 911 GT3 IF IT HAD THE SAME AMOUNT OF TORQUE BECAUSE IT HAS LESS POLAR MOMENT OF INERTIA WHICH IS THE TERM WE USE TO REFER TO THE CAR’S ABILITY TO ROTATE AROUND A CENTRAL …”

You get the idea. The owner of a 911 GT3 doesn’t have to say any of that stuff. All he has to do is make sure he watches the rearview mirror at trackdays for Cincinnati-area auto mechanics in 17-year-old C5 Vettes, which is a much easier task. Just put your hand out the window, wave the Vettes by, then conveniently neglect to mention that episode when you’re recounting the trackday to the other orthodontist in your practice. Very simple.

Returning to the topic at hand: There’s no way to justify the purchase of a 986 or 987. They’re not fast. They’re not reliable. The bills can be astonishing when they arrive. Little things will cost you a tremendous amount of money. Checking the power steering fluid on a Boxster, which is something you’ll want to do very frequently, is a thirty-two step process which gives you the chance to damage not one, not two, but four irreplaceable clips buried in the bodywork. Even if the infamous IMS problems didn’t happen—and there’s no way to ensure they won’t, even if you’re already replaced the bearing in the past—you’re certain to incur four-figure costs on recurring basis.

Every once in a while, some mook will write something on the Internet about what great bargains these cars represent. Do not listen to these people. They have no idea what it costs to keep a 986 or 987 operating to its original design specs, which is the only situation in which they are worth driving. A beat-up Boxster with floppy bushings and all the paint worn off the interior buttons isn’t worth having—and that’s what you get for $10k in a 986 and $15k in a 987. Also, those cars are chock-full of deferred maintenance, none of which will be cheap.

In short, Jacob, I recommend that you buy anything else. A C5 Corvette. A Honda Civic Si. An NC Miata. A Suburban 2500 off a government auction. Any of these options will make you happier in the long run. Do yourself a favor and forget all about this idea, which will make you first poor, then miserable, then even poorer, then even more miserable.

Having said all that, I’d like to offer a counterpoint of sorts. After more than a decade of ownership, nearly 13,000 miles of actual racetrack usage across more than 125 days on track, and a lot of misadventures which have no place in a family publication like Hagerty but which would make for a great NC-17 movie or two, I sold my “550 Spyder” to the lady mentioned at the beginning of this story—and she has had the most wonderful time with it. She’s running 1:46 laptimes at Mid-Ohio on Wednesday nights and taking it to cars-and-coffee meets and driving it across the Midwest to all sorts of exciting parties and whatnot.

Why has her experience been so good? It’s simple. She could have easily afforded a brand-new Porsche. She bought my used Porsche because she didn’t want to worry about crashing it on-track. So the fact that she has spent close to ten thousand dollars in service and repair since taking delivery doesn’t faze her one tiny bit. She’s replaced every part of the power steering system—twice. Wheel bearings, brake discs, valve cover gaskets, you name it. From her perspective, it’s still cheaper than buying a new one. That’s the only sane way to look at a used Porsche. Ask yourself if you could afford to buy it new. If the answer is “Absolutely,” then you can afford to own it used. That’s true for everything from the 944 to the 928 to a three-year-old 981 Boxster.

I should also note that I strongly warned her against buying my Boxster several times. “Get a C5 Corvette,” I suggested. “It’s way faster and way cheaper to run.” She ignored that, because she liked the GT Silver paint and the brown leather and the ultra-trick two-tone wheels. And she’s been quite happy with her choice ever since. You see all the good things that can happen when you ignore my advice? 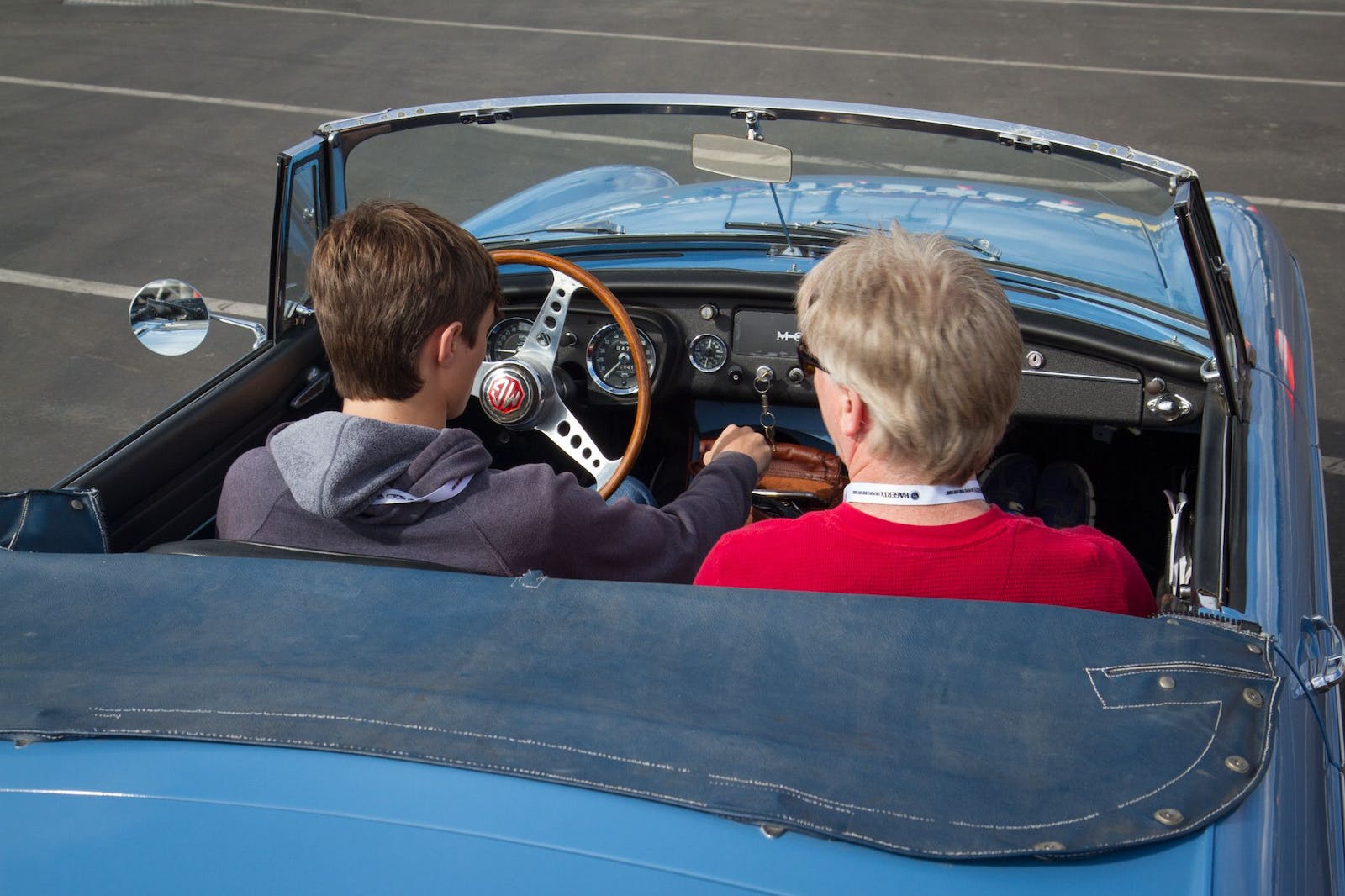 Get an insurance quote
A Story About
Leave comment
Read next Up next: The Monterey auctions may be online, but these 8 oddballs keep it weird