We are all very ready for 2021 to arrive—mostly, because that means 2020 will be behind us, but also because there are some automotive milestones to celebrate next year. For example, 2021 is the Jaguar E-Type’s 60th birthday, so you can be sure there will be plenty of fanfare for “the most beautiful car in the world” (Enzo Ferrari’s words, not mine). Want to get an early start on the celebratory action? Check out this Jag, up for auction next month. A factory development and press car as well as the tenth production E-Type coupe built, chassis number 860010 crosses the block on October 31 at the RM Sotheby’s London auction.

The E-Type had a glorious debut in March, 1961. A barely-finished gunmetal grey fixed-head coupe, registered as 9600 HP, was driven at high speed to Switzerland and arrived just in the nick of time for that year’s Geneva Motor Show. Demand for test drives was so high that a green roadster, registered as 77 RW, was rushed 600 miles to Geneva with factory driver Norman Dewis at the wheel.

The curvaceous Jaguars stole the show, and over the coming months the automotive press waxed lyrical about the new cat from Coventry. Autosport called it “one of the quietest and most flexible cars on the market, capable of whispering along in top gear at 10 mph or leaping into its 150 mph stride on the brief depression of a pedal,” and praised its “sheer beauty of line which easily beats the Italians at their own particular game.” Autocar got its best recorded performance figures to date out of the E-Type and said it delivered “what drivers have so long asked for, namely, sports-racing-car performance and handling, combined with docility, gentle suspension and the appointments of a town car.” On our side of the pond, Road & Track noted that it “comes up to, and exceeds, all our expectations.” 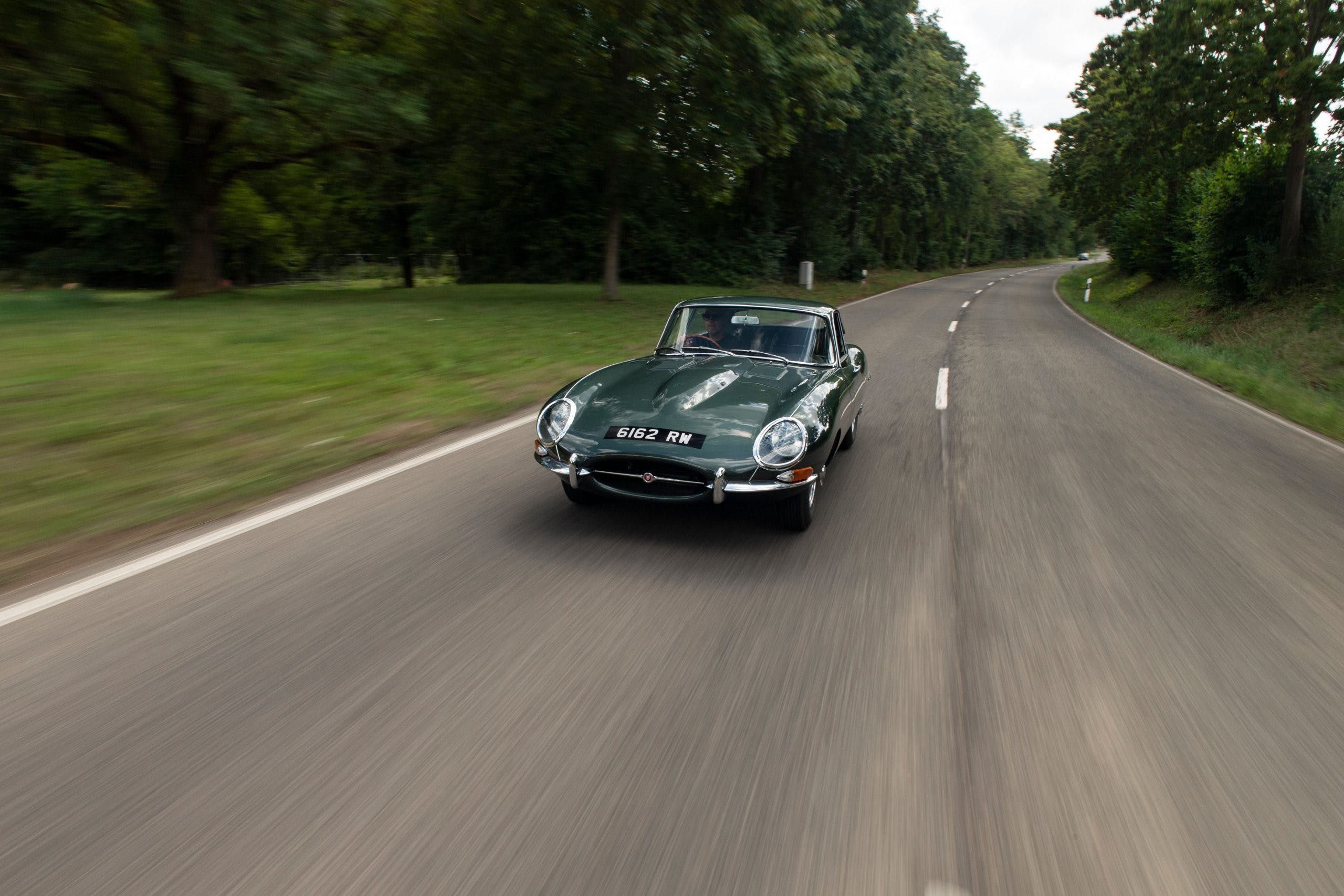 The 77 RW roadster is currently in the Jaguar Daimler Heritage Trust collection, and 9600 HP became the subject of a 2002 book called The Most Famous Car in the World. Jaguar is also building six replicas of the Geneva Motor Show pair to celebrate the E-Type’s 60th.

The car up for grabs in London next month may not have been the literal showstopper that its two siblings were, but the Opalescent Dark Green fixed-head coupe still played a huge part in the E-Type’s story. Stamped chassis no. 860010 and registered as 6162 RW, it’s the tenth production E-Type coupe. That early build date alone is enough to make it noteworthy, but what really sets this Jag apart is that it was also an early press car and a factory development car. 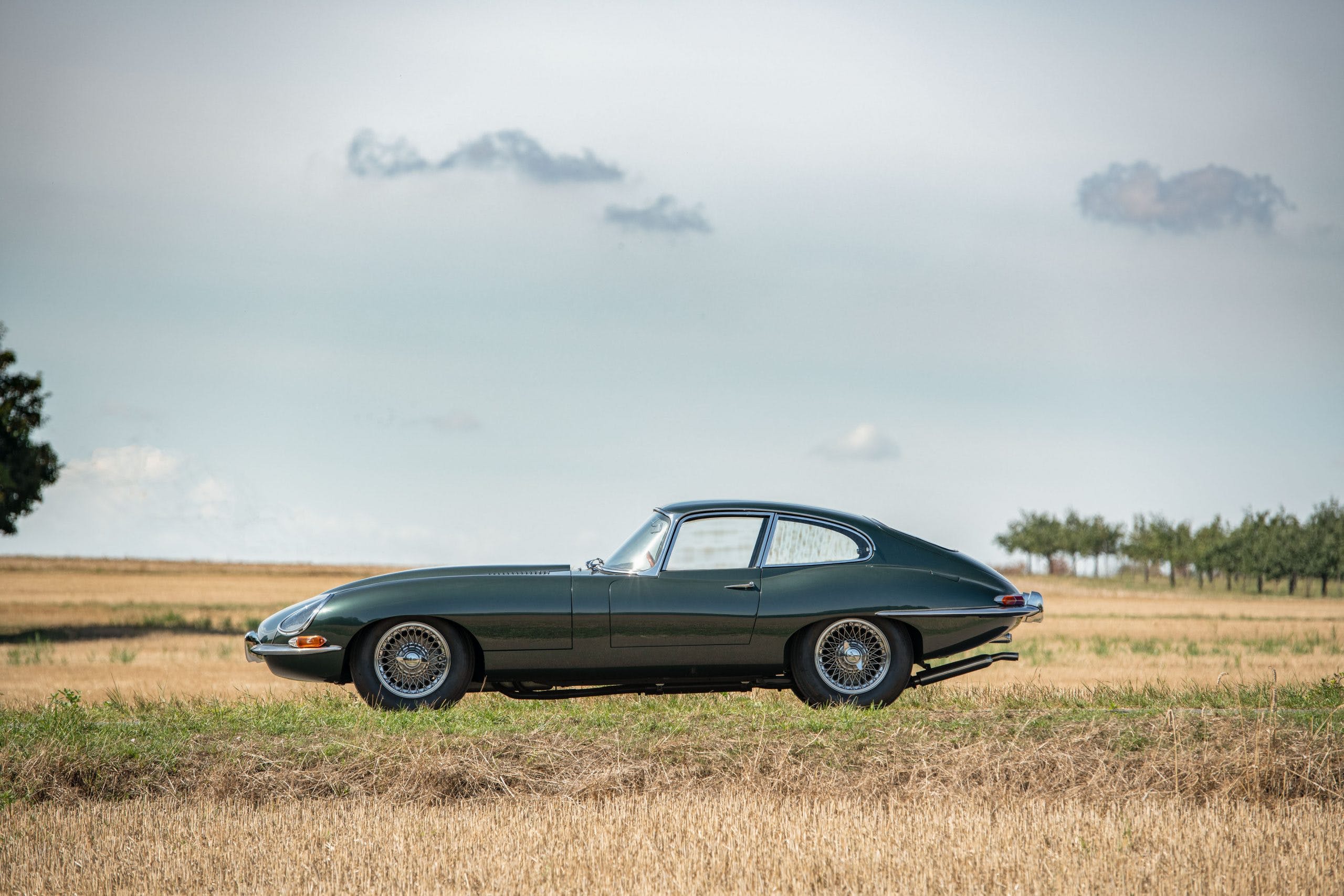 Jaguar used this car, registered 6162 RW, for high-speed and suspension testing, making some interior changes in the process. Close examination reveals a lower floor on the driver’s side and repositioned pedals (early “flat floor” E-Types have notoriously cramped footwells), revised ventilation, altered seats, and a few other minor details. The changes you can’t see included new piston rings, an aluminum oil pan, and a 3.07:1 axle ratio (compared to 3.31 in the standard car).

Magazine features for 6162 RW included Italy’s Quattroruote, Germany’s Auto Motor und Sport, and Britain’s Motoring News. During his test for the European magazines at Monza, famous racing driver/journalist Paul Frère hit 256 km/h (159 mph). Motoring News topped 160 mph in the car. It then served as a press car during the 1962 Tour de France, and by 1963 the car was in private hands. It got a full multi-year restoration in the early 2010s and hasn’t been shown publicly since Salon Privé in 2018.

Will this be a world record E-Type? Probably not. Genuine Lightweights have sold well into the millions in recent years. It will, however, probably be the most expensive E-Type we’ve seen in quite some time. Two very early, very rare (Jag built about 20) U.S. market flat-floor E-Type coupes have sold in the past couple of years, one for $720,000 and one for $626,500. This example’s stellar history and unique factory features should see it to at least that much.

Auctions Ye shall know us by our hats: Driving for Mecum on TV
Steven Cole Smith