Group B cars are going wild at the 2021 Paris auctions

In February 2020, we reported (in person!) on the three Paris auctions. Oh, what fun it was. The annual festivities surrounding the Rétromobile Show were in full swing with huge crowds, vendors as far as the eye could see, and not a mask in sight. COVID-19 was making headlines, but it was a few weeks away from shutting down the normal life in the West. At the auctions, more than $62M worth of cars changed hands.

It’s starting to become repetitive as we say it once more, but this year was not like last. Rétromobile itself is postponed until June 2021, while the three auctions (Artcurial, Bonhams, and RM Sotheby’s) have spread their sales out over February (Artcurial and RM Sotheby’s) and March (Bonhams). Artcurial was the first to go on February 5, holding an in-person and livestreamed sale.

Although the Artcurial event was subdued, the bidding certainly was not. In particular, several rally cars from the Group B era of the World Rally Championship (1982–86) sold for exorbitant prices. One, a 1988 Audi Quattro Turbo Sport S1, is the most expensive Group B-era car we’ve ever seen sell at auction.

The so-called Killer Bs have been primed for big gains in value for years, owing to their power, over-the-top looks, and reputation for competing in one of the last truly lawless forms of motorsports. Even so, the bidding here was unprecedented and, perhaps, ahead of the market.

“In all honestly, the results surprised us, too,” said Max Girardo, whose dealership Girardo & Co. regularly buys and sells Group B cars. “But it goes to show that the appetite for these evocative cars is stronger than ever,” he adds.

The sale included an MG Metro 6R4, a Renault 5 Maxi Turbo, and a Lancia 037, but the most expensive and significant Group B cars out of the collection are detailed below.

Despite its limited participation in the World Rally Championship (RS200s were only able to compete in a few rallies before Group B was banned), the Ford RS200 is among the most desirable cars from the Group B era.

This one is another works rally car, which took third at the 1986 Swedish Rally. That was the best finish in the WRC for the RS200. Given that history it’s arguably the most desirable RS200 rally car despite the neglected condition, so it isn’t a bad value at this price. Other, quicker “Evolution” models with no race history have sold for over half a million dollars.

Lancia’s Delta S4 was perhaps the most extreme and the most clever car of the Group B era. The first Lancia rally car to embrace all-wheel drive, it also features a twin-charge system for the engine that combines a Volumex supercharger for boost at lower rpms with a KKK turbocharger for boost at higher revs.

This example finished second at the 1986 Memorial Bettega rally with Miki Biasion at the helm, but Group B was banned shortly after. The Delta then raced in the French Rallycross Championship and was later restored to its works Lancia Martini livery.

Other cars cars might have been more extreme-looking and more exciting to watch, but if we’re going by pure numbers the Peugeot 205 T16 was the undisputed champ of the Group B era, with 16 overall wins and two World Championships (1985 and ’86).

One of 19 examples of the improved 430-horsepower Peugeot 205 T16 Evo 2, this is a works rally car that won the 1986 Tour de Corse (Corsica). After Group B was banned, it was highly successful in rallycross competition and then was restored with its original livery in the 1990s. It’s the only car out of this collection with a WRC win to its credit, so it makes sense that it was the most expensive of the bunch (save for the stupefying sum paid for the museum’s never-raced Audi). It’s also a record for the model and about twice what other 205 T16 rally cars have sold for.

This Quattro never raced in anger other than an appearance at the 1988 Race of Champions, which was a tribute to the late Group B driver Henri Toivonen. The current owner then bought it directly from Audi, and it has been in the museum since.

Despite all the above not having exactly walked the walk, this Audi certainly looks the part, and its price was a shock. The final result is nearly two times the low estimate and the most expensive Group B-era car we’ve ever recorded for sale at public auction. It sold for twice as much as the Peugeot, which was both a works car and a WRC winner. Someone just had to have it. 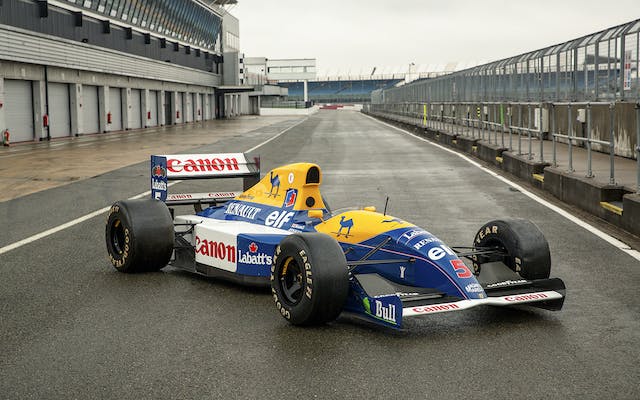