The upcoming “Passion for the Drive: The Cars of Jim Taylor” auction presents an array of cars from America and Europe, most notably a clowder of Jaguars. (Yes, that’s the term for a group of cats. We checked.) Taylor clearly has a passion for the marque, as 21 of the auction’s 131 vehicles hail from Coventry. Excepting what’s perhaps the highlight of the group, a 1955 D-Type Sports Racer, Broad Arrow’s October 14–15 auction of the Taylor collection will be offered without reserve, so these cats will find new homes. Here are a few felines up for adoption that caught our eye. 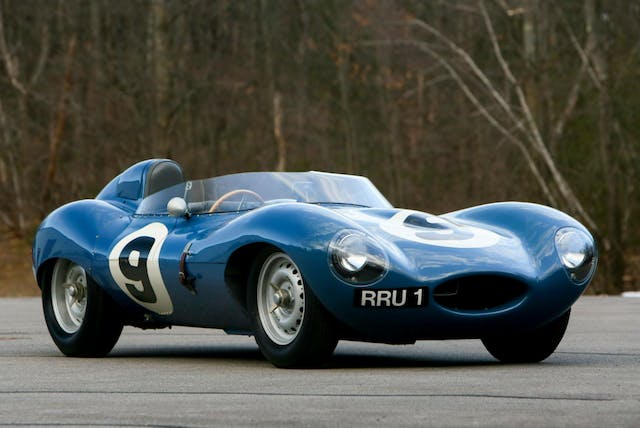 The showpiece of the entire auction for many is this 1955 Jaguar D-Type Sports Racer. Chassis XKD 515 was briefly raced (with a win and multiple podiums) but has spent most of its life as a road car. Having been kept primarily on the street instead of the racetrack has helped make this example one of the most original of the approximately 60 D-Types built. This Jag has show provenance as well, having crossed the Concours lawns at Pebble Beach and Amelia Island.

Created specifically for endurance racing, a D-Type won the 24 Hours of Le Mans in 1955, 1956, and 1957 including five of the top six places that year. On-track success was due in large part to the car’s leading-edge tech: the dry sump, dual overhead cam 3.4-liter straight six pushed its 250 horsepower through a synchromesh 4-speed manual gearbox, and disc brakes gave the car an edge over the more common drums of the era. The aeronautical industry influenced portions of the car’s design, including a monocoque cockpit section constructed from sheets of aluminum alloy. 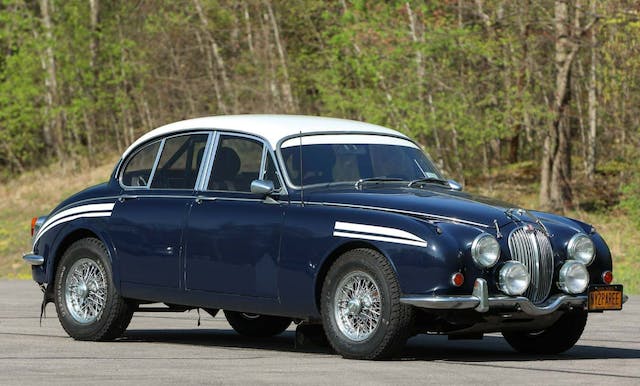 Built to handle rugged terrain, this 340 once completed a 17,000-kilometer rally from Amsterdam to Beijing. In 2008, it was fully sorted to compete in the 100-year anniversary of the New York-to-Paris Great Race, only to have the race cancelled. 340s began life with a 3.8-liter inline six and could carry 5 occupants in comfort. Racing priorities shifted things for this particular example, though. Extensively modified for durability and fitted with a larger 4.2-liter engine, a full roll cage, and a fuel cell taking up the rear compartment, this two-occupant saloon is all business. The knobby tires work surprisingly well with the car’s elegant lines—Safari Jag, anyone? 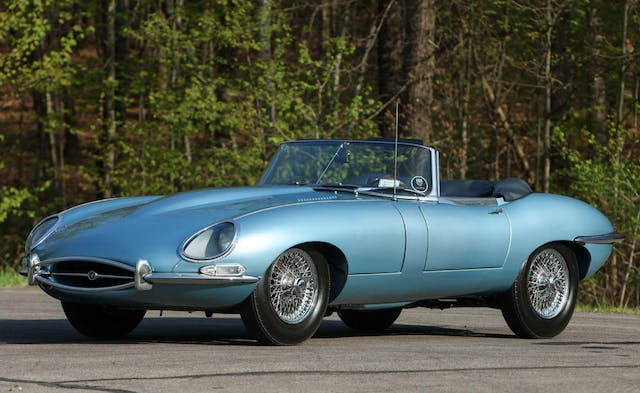 No list of Jaguars is complete without an E-Type roadster. Rooted in the technology of the Le Mans-winning D-Type and penned by Malcom Sayer, the E-Type brought speed and sultry looks to the street in a way few cars have managed before or since. Between Enzo Ferrari’s famous compliment, calling the E-Type the most beautiful car in the world, and the memorable high-speed drive across Europe to its debut at the Geneva Motor Show in 1961, the car became an instant classic.

This 1966 example retains its original numbers-matching 4.2-liter inline-6 engine and comes with a Jaguar Daimler Heritage Trust Certificate. Other E-Types being sold at the auction include a 1965 E-Type Coupe, a 1972 Series III V-12 2+2 four-seater, and a 1974 Series III V-12 Roaster. 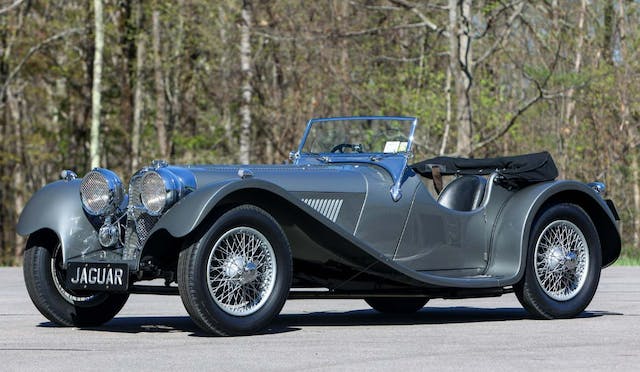 Sir William Lyons entered the vehicle manufacturing fray with partner William Walmsley under the banner of Swallow Sidecars, which they later changed to SS in 1931. the company would go on to become Jaguar in 1945, but prior to that, they offered a several models for sale including the two-seat SS 100. The “100” in the name refers to the theoretical top speed of the car (its predecessor, the SS 90, was good for, you guessed it, 10mph less). Weighing just 2600 pounds from the factory, the 1938 model received a larger 3.5-liter engine and had a claimed 0-60 time of around 11 seconds, which was quite brisk in period. 1 of only 116 3.5-liter cars produced, this example maintains its original matching-numbers engine and includes over 50 pages of documentation of its history. The oldest Jaguar at the auction, it has been shown at the Pebble Beach Concours d’Elegance twice and judged Most Outstanding Jaguar at the Greenwich Concours d’Elegance. 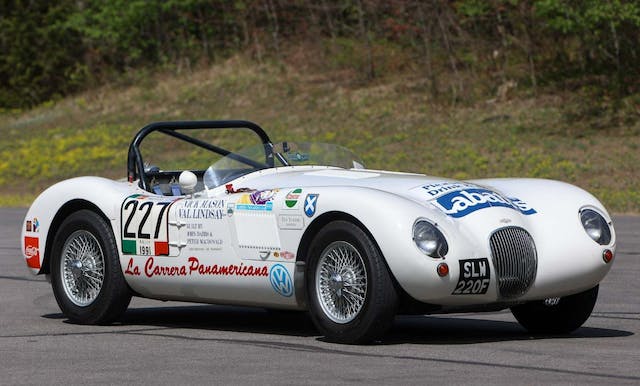 Although it’s not truly a Jag, this pseudo-C-type deserves attention. Built by vintage race car company Ten Tenths for its co-owner, Pink Floyd drummer Nick Mason, this fully race-prepared C-Type recreation ran in the 1991 Carrera Panamericana rally and is featured in a film about the event, La Carrera Panamericana. Featuring a Jaguar drivetrain, Proteus steel tube-frame chassis, fuel cell, and extensive steps to improve durability, this car backs up its famous ownership history with the preparedness for extensive touring events.

Get an insurance quote
A Story About
Share Leave comment
Read next Up next: Mercedes tweener cribs C-Class dash, new Super Duty due next week, Herta’s road to F1 grows longer

Interesting Jaguars (have a 92 Proteus C and Tempero XJ13)