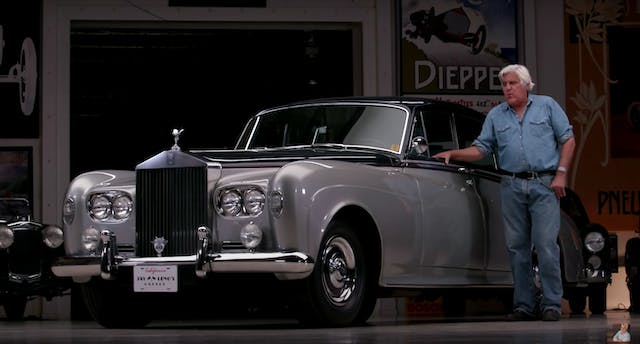 “You look at a Bentley,” says Jay Leno, “but you look inside a Rolls Royce.” As he shows off John Frankenheimer’s 1965 Rolls Royce Silver Cloud III, we are inclined to agree. Nothing says luxury like this British-built, two-tone four-door. The posh character of this sedan is more than skin-deep, though.

Hollywood director John Frankenheimer purchased this particular car, which now belongs to the Peterson Museum, during a trip to France in 1965. Frankenheimer was shopping for a new car and sat in a Bentley first, but his lanky frame didn’t fit comfortably. The dealer suggested the Rolls, which was a bit roomier, and after a test fit Frankenheimer purchased the car—with cash. He called it a wedding gift for his wife, but we suspect some purchase-justifying mental gymnastics.

The Rolls quickly became Frankenheimer’s vehicle of choice when he visited the movie sets. He’d drive it himself, too, even giving rides to stars around sets and between venues. As Jay sits in the back seat, we can see why the Silver Cloud was so well-suited to wafting around the rich and famous. The fit and finish is exceptional, and there is even a small writing table for those in the back seat. Jay points out one incongruous detail, however; the motors that operate the power windows are quite loud, and it’s easy to imagine a ’60s buyer who’d prefer to quietly raise and lower them with a crank.

The cabin may be roomy and airy, but the engine bay certainly is not. The 6.2-liter V-8 engine is positively crammed into the engine compartment, leaving little to see even with the hood open. (We shudder to think of actually servicing this mill.)

When Jay takes the Brit out for a drive, it’s obvious that the focus of the car is comfort. This engine is less about big power than about effortless cruising. The seating posture is high and, between the leather and the wood trim, Jay says it feels more like a library than a car. The build quality sets this Silver Cloud apart from just about anything else built during its time. Even today, this is a car you want to be seen in.

Get an insurance quote
A Story About
Share Leave comment
Read next Up next: This little-known Dutch rally car could be a star in your local automotive scene