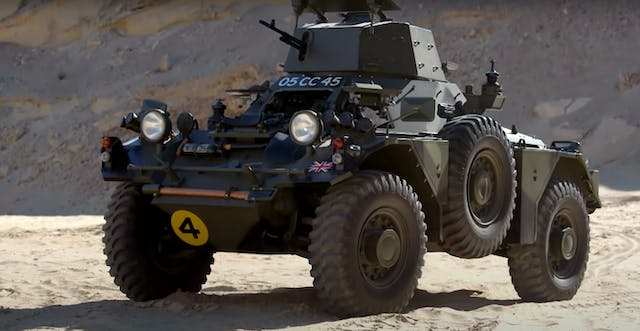 Jay Leno’s Garage showcases a vehicle collection that’s nothing short of eclectic. Even so, the automotive hero of this week’s episode is even further off the beaten path than Jay Leno’s ’38 Tatra or his 1970 Monteverdi. Today, Leno shows off his 1959 Ferret armored scout car.

The Ferret is a British reconnaissance vehicle whose decades-long military career began in the 1950s. Most passersby would identify this “car” as a tank, but the Ferret’s rubber tires and offensive array contradict that classification. This machine is faster and more agile than a tank and carries significantly less firepower—just a single .30-caliber machine gun. 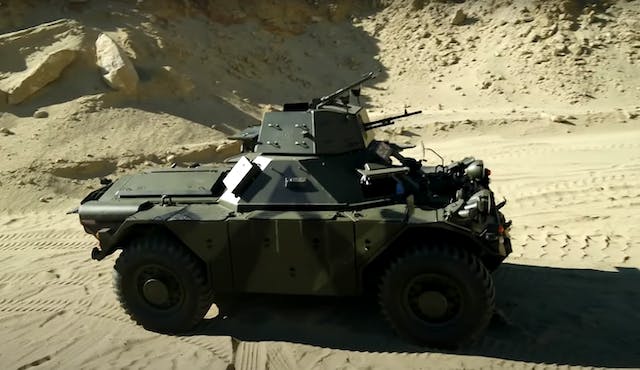 The Ferret’s powertrain is a Rolls-Royce 4.25-liter straight-six built by Daimler. That 129-hp engine is mated to a pre-selector transmission via a fluid coupling. Translation? There is a third pedal at the driver’s feet, but it isn’t a conventional clutch pedal. A more popular (though still obscure) car with this arrangement is the Cord 810. Rather than pressing the clutch pedal, shifting gears, and then releasing the pedal, the operator selects the next desired gear and presses the pedal to engage it.

The scout car is four-wheel-drive and needs all the traction it can get on soft terrain to hustle around its nearly 8000-pound curb weight. Still, the Ferret is a featherweight when compared to a tank. Its relative light weight, when combined with the torque of the Rolls engine, gives the scout car a top speed near 60 mph. Watching Jay slide it through the California desert looks downright fun, if potentially damaging to the eardrums. Now I have the very problem Leno describes—how to justify owning one to my significant other.