When Christies left the North American classic car auction market in 2003, it looked as though RM Sotheby’s (then RM) had gained a monopoly on high-end car auctions in North America. That is until former Christies and RM employee David Gooding launched Gooding & Company at Pebble Beach in 2004. Since then, Gooding and RM have battled consistently. The rivalry renews for 2017 in Scottsdale where Gooding has fielded over 160 diverse lots for the market’s consideration. Following are five notables:

1966 Chevrolet Corvette 427/425 Roadster
Presale estimate: $200,000 – 240,000, no reserve
Hagerty Price Guide: $65,600 – $172,000
Lot 31
Big-block midyear Corvettes have broad appeal.  And although small-block cars are more usable and arguably better all-around performers, the bragging rights and special “Stinger” hood accompanying a big-block Corvette convertible are hard to resist. Corvette convertibles sporting 427-cid V-8s have nudged the quarter million mark before. This might be the year when they heat up again, along with the American muscle car market in general. If this example sells for the high end of its pre-sale estimate, it might signal that big-block C2 Corvettes are in demand again.

2002 BMW Z8
Presale estimate: $200,000 – 240,000, no reserve
Hagerty Price Guide: $130,000 – $270,000
Lot 33
The BMW Z8 wasn’t universally loved when it was new. Built at the height of the retro-futuristic styling fad that saw VW re-introduce the Beetle, and Ford and Jaguar re-imagine the classic T-Bird and S-type sedan respectively, the Z8 was compared unfavorably to the sublime Albrecht Goertz styled 507 of the 1950s. It didn’t help its cause either that it’s output matched the M5’s but the M5 was more daily-drivable. For about the first eight years, the Z8 depreciated significantly from its original $130,000 list price. The floor was reached around 2009 at about $75,000. Like the Ford GT reboot of 2004, the Z8’s time in the wilderness was brief. It’s on a very short list of cars built in the last 15 years that can truly be described as modern classics. This car’s $200,000-$240,000 estimate is probably near market correct at the moment. We’ll be watching for any sign of further upward mobility in the Z8 market.

1936 Squire 1 ½ Litre Tourer
Presale estimate: $1.5 – 2.0M
Hagerty Price Guide: N/A
Lot 34
The Squire 1 ½ Litre Tourer is probably the best British sports car that you’ve never heard of. Engineering prodigy Adrian Squire first started planning his sports car at the age of 14. By 21, he had obtained financial backing and started building cars that were stunningly advanced for their time—a supercharged, double overhead-cam four-cylinder and finned magnesium brakes were part of the spec. Only seven cars were built before Squire sold the company to Lagonda on the brink of WWII. Plans to produce cars again after the war came to naught. Adrian Squire was killed in a bombing raid. He was only 30. Real Squires hardly ever appear at auction. This car’s notable pre-sale estimate still seems conservative.

1958 Porsche 356A Super Speedster
Presale estimate: $200,000 – 275,000, no reserve
Hagerty Price Guide: $217,000 – 462,000
Lot 62
Beater Speedsters are all the rage these days. Barn fresh cars needing everything are often meeting or even exceeding the price of decent older restorations. Mind you, we’re not talking about preservation class, unrestored gems, but disheveled barn finds, needing everything. Seinfeld paid nearly $600,000 for one at Pebble Beach in 2015. An even rougher car uncovered by none other than barn find king Tom Cotter sold for a whopping $341,000 at RM/Sotheby’s Hershey sale last August. This one may be the most needy of the three, yet its pre-sale estimate might prove to be low. Or then again, maybe the market has moved on from beater Speedsters. We’ll see.

1969 American Motors AMX/3
Presale estimate: $900,000 – 1.3M
Hagerty Price Guide: N/A
Lot 132
If all had gone according to plan, AMC, the Hornet, Gremlin and Matador’s manufacturer, would have had an Italian-designed, mid-engine exotic to compete with Ford’s De Tomaso Pantera. Engineered by ex-Ferrari chassis genius Giotto Bizzarrini and styled by Italdesign’s founder Giorgetto Giugiaro, the AMX/3 was perhaps even more stunning than the De Tomaso Mangusta or Lamborghini Miura, the cars then thought to be the prettiest mid-engine designs extant. The only recognizable AMC components were the 390-cid V-8 and door handles, the same ones that would show up a few years later on the Pacer. During tests, the car would exceed 160 mph at Monza. It wasn’t to be. Just five development cars were built before AMC got cold feet. Not unexpectedly, it’s a tough car to put an estimate on. We’re dying to know what the Scottsdale market thinks. 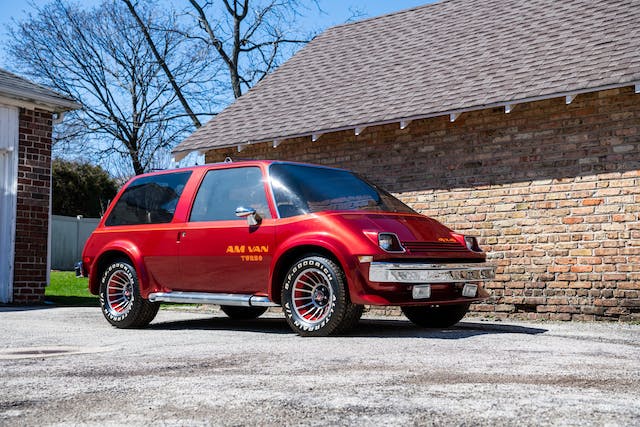