The 2011 BMW 1 Series M was an instant collectible … but has its moment come and gone?

It’s been a decade since the launch of the 1 Series M. For many sports cars, this is around the time nostalgia starts to set in and when collectors start to supplant young performance junkies as the primary owners. For this fat-fendered, hot-rodded Bavarian, it’s been a bit different: Considered special since it was new, the 1M has practically never depreciated. Instead, we’re wondering if its hallowed status among modern BMWs is starting to slip.

This M-car was destined for greatness. Arriving on the scene just as BMW’s M division seemed to be losing its edge—it had released the X5 M not long before—the hopped-up 1 Series was touted by BMW and auto journalists alike as second coming of the E30 M3. Nevermind the fact that it wasn’t cut from a strictly traditional M cloth, featuring a massaged version of BMW’s twin-turbocharged six instead of a high-revving naturally aspirated engine, or that BMW cribbed much of the 1M’s performance hardware—rear suspension, rear subframe, limited-slip differential, brakes, wheels, and tires—straight from the contemporary (E92) M3 Competition. The ultimate 1 Series had the right dimensions and the right personality: its mandatory manual transmission and jarring ride would surely deter the lawyer and dentist crowd.

And let there be no mistake: The car is a performance stud. The 3.0-liter straight six peaked at 335 hp and 332 lb-ft, with a electronic overboost to temporarily push torque to 369 lb-ft. The 1M hit 60 mph from a standstill in 4.7 seconds and was electronically limited to 155 mph. It’s a lively thing, sharp on turn-in and willing to oversteer at the slightest provocation. The engine is not a classic M redline screamer, but there is a generous well of low-end torque to tap into, such that on most curvy roads you can comfortably leave it in third.

The 1M was also something of a bargain, at least by the standards of German performance cars, with a $47,000 sticker price that undercut the contemporary M3. That said, many BMW lovers were willing to pay above that—and they still are today. A look into the 1M’s valuation data indicates it was something of an outlier in the marketplace, in that it experienced little to no depreciation from the moment of its highly-touted 2011 arrival. (No doubt, the car’s relative rarity helped establish it as an instant collectible; just 983 1Ms made it to U.S. shores.) Even the hallowed E30 M3—at the right point in time—could be picked up for cheap before it launched into the price stratosphere.

Ten years on, the 1M’s reputation as one of the last “pure” BMWs seems, for better or for worse, more assured than ever, with modern offerings from the brand wandering ever deeper into luxo-cruiser territory. Even driver-quality examples in #3 (Good) condition command $49,000 on average, while #2 (Excellent) 1Ms go for $65,000. Immaculate-quality #1 cars (Concours) are worth $85,000.

Some of the car’s BMW contemporaries, however, seem poised to catch up. The Z3-based M Coupe, E39 M5, and E46 M3 are all recent beneficiaries of appreciation, but perhaps the most instructive point of comparison is the 1M’s contemporary: the E92 M3 (2007–2013).

Sold alongside the 1 Series M, the E92 is a unique prospect in its own right—the final naturally aspirated M3 as well as the only one to come with a factory V-8. Buyers nevertheless have seemed to regard it as just a used car: values dropped 15.5 from 2018 to 2020, to $33,650, per our insurance data. During that same period, the 1M dipped only slightly, to $57,440 (ironically, right around the original MSRP for the M3). The race isn’t over, though. Insurance data also shows much more interest in the M3, with the number of quotes increasing 143 percent in that same period, versus just 3 percent for the 1M. What does this mean? In a nutshell, the E92 became a lot more appealing once values dropped low enough. Usually, that sort of interest leads to value increases.

It should be noted, there is a considerable production volume disparity between these two models. BMW built 6342 1Ms globally, compared to just north of 40,000 V-8 M3 coupes. Yet as we’ve pointed out, there’s generally much less connection between rarity and price than collectors think. Plus, the 1M has actually been more common in collector car circles: since 2015 there have been 59 1 Series Ms at public auction versus 23 E92 M3s. Since 2015, 21 of the total 23 E92 M3s that went to public auction (91.3 percent) sold. This tells us is that these cars are being priced at a level that buyers are willing to meet. With the 1M, it’s a different story—owners know what they have. While the 1M had a 100 percent sell-through rate from 2016 to 2017, in 2018 the rate dropped to 94 percent and had been on a downturn each year since—75 percent so far in 2021. (Mind you, that’s still quite strong.)

Which brings us back to the 1M’s ten-year birthday. This is still among the most respected modern BMWs in the market, but as time goes on, interest in the more affordable, more readily available, naturally-aspirated, V-8-powered E92 M3 is only growing. That’s to say nothing of the more recent availability of the better-performing M2 and M2 Competition, which can be bought at a significant discount and possibly even with an extended warranty.

Nobody is forgetting about the very special, always-in-demand 1M. But in the years to come, it’s unlikely we’ll see especially dramatic fluctuations in its value compared to cars like the E92 M3 and E86 Z4 M Coupe, which are busy making the all-important transition from used car to collector car.

Hagerty Insider Would you pay over $900K for someone else’s “reimagined” Porsche?
Andrew Newton 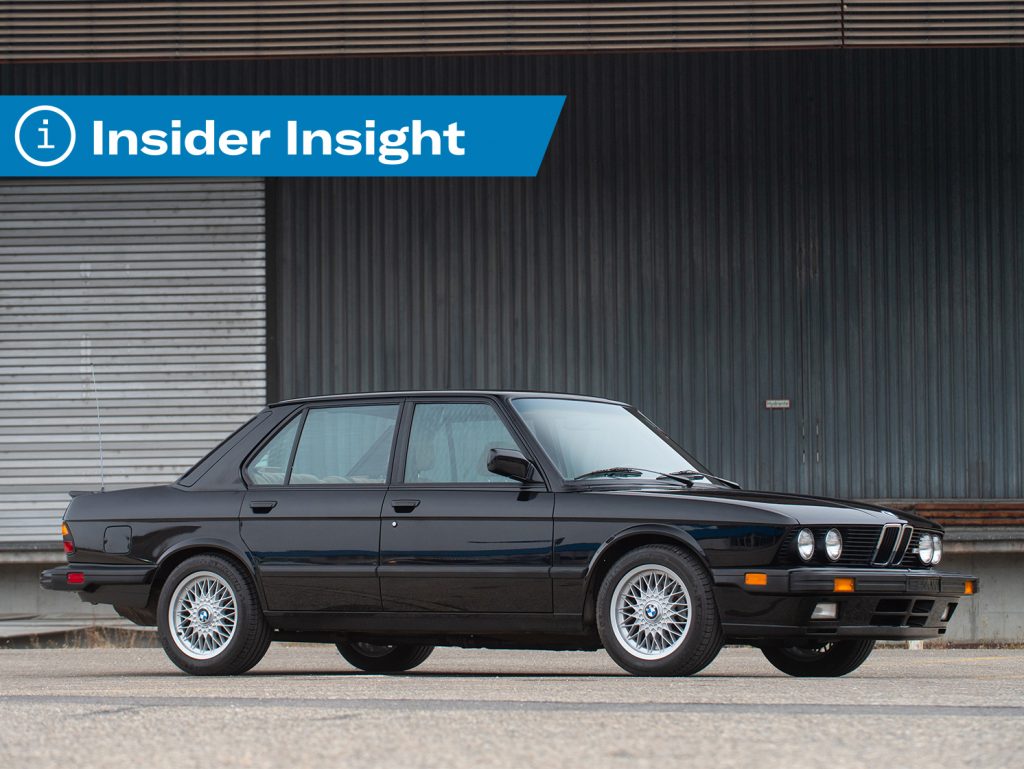