A gated neighborhood in an upscale Tampa suburb is a strange place to send your carburetors for rebuilding. The shop sits in the three-car garage of a lovely home, alongside a similarly lovely turquoise 1957 Chevrolet Nomad wagon. There is a long table with some chairs, and a workbench is parked next to a couple of soda blasters. All is lit by florescent bulbs overhead.

This the modest domain of Riley’s Rebuilds, a carburetor rebuilding service headed by Riley Schlick.

Riley is a 17-year-old girl: A surfing, skating, soccer-playing, Jeep-driving high school senior. Four of her high school friends, all girls, have learned to rebuild carburetors too, rounding out the staff of Riley’s Rebuilds. Ship them your worn-out carburetor, and they’ll ship it back soda-blasted, ultrasonic-cleaned and rebuilt to original specifications.

On what planet is this happening?

Here on Earth, actually, where a girl with a screwdriver, a drill, and some wrenches can earn “really good money,” Riley says. Her father, Dane, is an amateur mechanic. That’s his Nomad, which he’s had for about 15 years, and he also has a much-modified Dodge Little Red Wagon pickup that he drag races. He’s the one who taught Riley how to rebuild carbs, and she taught her friends, and now they all have part-time jobs “that pay us well,” Riley says. “For teenagers, anyway. So much better than minimum wage.”

Riley has always been interested in cars, starting out “holding the flashlight for my dad.” When she was 14, she told her parents, who are both in the medical field, that she wanted to buy a car that she could rebuild, getting it ready for when she was old enough to drive. Her parents said it needed to have a manual transmission, not go above 80 mph, and have a real roll bar. The logical answer was a manual-transmission, four-cylinder Jeep.

To buy it, she needed a job, and the only place that would hire a 14-year-old is a local grocery chain. No, her father said, we’re going to go out in the garage and figure out a way to make money. Hence the carburetor rebuilding operation, which has been in business for three years.

“I made the money to buy the Jeep in three or four months,” Riley says. They bought seats, wheels, tires, a new transmission, and had it painted in a “Jurassic Park” livery. She kept rebuilding carbs to pay for all that, and when it was done, she kind of eased off on Riley’s Rebuilds. But then she totaled out her friend’s Honda Civic, “and I had to pay for that—$10,000.” So it was carburetor game on again, and it hasn’t slowed. She’s saving money for college, even though she already has a scholarship offer to play soccer, which she does three or four nights a week. 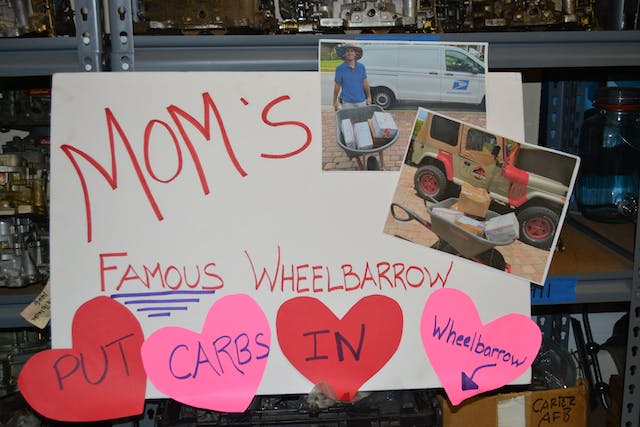 She figures she’s rebuilt carbs from all 50 states, “including a couple from Hawaii.” She and her co-workers try to restore the carbs back to stock condition, “but some of them are really messed up.” So she’s always on the lookout for spare parts, like choke flappers, linkages, rods, and jets.

Riley is a busy kid. She often gets up at 5 a.m. to surf before class. “With soccer, school and this, I really had no social life,” she says, and it was easy to tell her friends, “‘Come in the garage, make some money, and we can have a social life those nights. Talk about boys and drama in here, play some music, and you can tell people you work as a mechanic, because it’s really cool.’ And that’s how we all came together.”

Riley’s boyfriend, who also thinks being a mechanic is really cool, lives two minutes away, and he’s a regular visitor to the garage. Riley’s dad is often out there answering carburetor questions, and her mom brings drinks and snacks to the workers and their visitors. “It’s a big family,” Riley says, and parents know where their kids are at night. 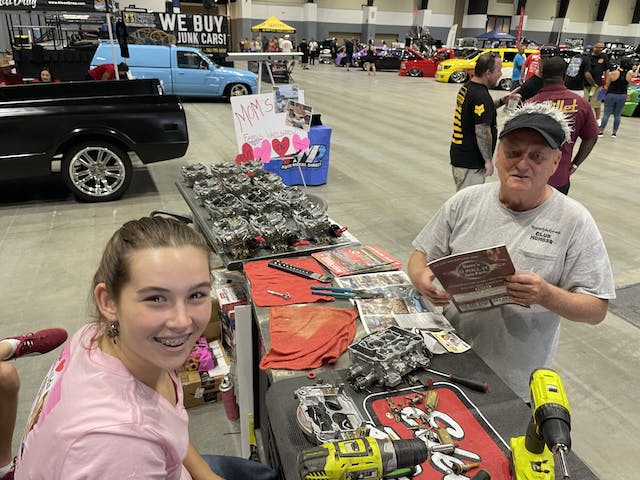 Business is booming. The world may have abandoned carburetors for fuel injection, but there’s “a whole weird underground” that still needs carbs, for circle track and drag racing and street rods. She has set up a Riley’s Rebuilds booth at several hot rod shows, “and I had a customer tell me he needed a carburetor to bring his car to the show, and he bought one from us there, right off the floor, and took it home and installed it, and drove the car back.”

Riley will rebuild the occasional Holley carb, but her real passion—and that isn’t too strong of a word—is Edelbrock carburetors. She and her dad visited the new Edelbrock headquarters in Olive Branch, Mississippi, a few weeks ago. They got the VIP treatment, and Riley brought home a parting gift: The brand-new Edelbrock 4150 VRS carburetor, which Riley says, bubbling, “puts everything else to shame. It’s really a game-changer.” She points out the four circuits, the convenient drain ports—“You can pull it out of the box and bolt it on the engine, no adjustments needed, but you can adjust it if you need to. It’s crazy. Insane!

“Edelbrocks—we all know them like the backs of our hands; we can break down eight in an hour,” Riley says. “Really, Edelbrock has been so sweet to us … They said anything you need, call us, we’re here for you.” Edelbrock has provided manuals, training videos, and technical support.

Riley has a year of high school left, and she foresees no end to Riley’s Rebuilds, even if she goes away to college. She’s already talked to one college soccer coach who has pledged to help find room in the engineering department to let her do rebuilds there if she comes to his school.

“This has been a great experience,” she says. “I’ve learned so much, and not just about carburetors.”

Maintenance and Tech 6 essentials for your travel toolkit
Kyle Smith

Get an insurance quote
A Story About
Share Leave comment
Read next Up next: 1986 Honda Civic Si: If only, if only

Great story. More kids need to be doing something useful.