I’ve had exactly six cars painted in my life. No. 1 was my very first BMW 2002. I bought it in Austin, Texas, in 1982—equal parts rust, bondo, and Colorado orange paint. I think the lay-on-more-bondo-and-then-spray-it-with-a-firehose paint job (at long-gone Bebrick Bodyworks) cost me $600. I was thrilled with the result.

Then, in rapid succession, there was another 2002 and the family’s Volvo 245GLT wagon, both repainted in Boston by Maaco in the mid-to-late-1980s, prior to selling them. Both jobs were in the mid-hundreds of dollars and looked OK when done. Next up was the BMW Euro 323i, which was sold and then returned to me by a flamingly irrational buyer under threat of lawsuit (long story). He had sanded off some small rust spots, leaving the car looking far worse than when I sold it to him. I took it to Earl Scheib for one of his $99.95 paint jobs. And then there was my BMW 3.0CSi in 1988, the only car I’ve owned that underwent an outer body restoration. It cost me four grand, which was an absolutely insane amount of money for 28-year-old me (I took out a personal loan from a bank to get it done), but the car still looks gorgeous today.

The Earl Scheib job on the 323i and the outer body restoration on the 3.0CSi effectively form the bookends of automotive painting—valuable case studies in how the adages that “time is money” and “you get what you pay for” apply better to bodywork and paint than to almost anything else. At the Scheib end of the scale, there was literally zero preparation. They literally sprayed paint over dirt. That’s what you got from Earl and his dentures for $99.95. It did return the car to a uniform color so I could resell it, but anyone could’ve seen that I’d have been better off spending more for a higher end result. At the other end of the spectrum, $4000 bought the 3.0CSi a bare metal glass-out respray with seven coats of hand-sanded urethane and seven coats of hand-sanded clear. It looked gorgeous, with that fall-into-it reflection, but the unintended consequence was that all the old chrome trim—and the rubber, and the interior, and the wheels—looked like absolute crap against the new paint. This is obvious when you explain it, but it came as a surprise to young cash-strapped me.

It’s for this reason that, over the years, I’ve come to feel that buying a car that needs paint is a sucker’s game. Unless you own a body shop and do your own work, it’s nearly impossible to come out ahead when the numbers being thrown around for a bare-metal glass-out respray are $15K–$25K, and that’s absent any needed bodywork or rust repair. This is why I’m increasingly attracted to cars with patina, cars where the condition of both the exterior and the interior hang together like a well-worn leather jacket and an old pair of Converse gym shoes. Everyone loves a pretty, shiny car, but the worn ones are a lot easier on the budget.

However, sometimes, all that a car really needs is a coat of paint, and one that won’t set you back six mortgage payments. With all that in mind, the sixth car I had painted is a good story.

In 2011, I bought a 1985 BMW 635CSi. It wasn’t like the drop-dead gorgeous Euro 635CSi I own now with the short bumpers, Polaris paint, and black stripes. As an ’85 U.S.-spec car, it was saddled with the ginormous American bumpers, making the car nearly eight inches longer than its Euro counterparts. And it had the mid-’80s U.S.-spec 182-horsepower engine, not the more potent 218-hp mill the Euro versions got. It did, however, have a five-speed, sport seats, and front and rear air dams. And, although the car had over 200,000 miles on it, it was rust-free, as the owner had moved it here from his native California. However, the years, the miles, and the sun exposure had decimated the paint; nearly all the clear coat on the roof and trunk lid had flaked off, leaving the burgundy color beneath it badly oxidized.

I picked the car up for a song. The owner had lavished a lot of attention on it, including rebuilding the head, but it had recently died on him three times, including the final straw with his wife and new baby in the car. It needed to go. He advertised it cheaply, saying that it had an undiagnosed electrical problem. Due to the capricious nature of its dying, he thought it was likely the vehicle’s electronic control unit (ECU). When I looked at the car and saw that it was rust-free, I bought it on the spot. I towed it home, ran it around the block until it died, and found that the problem was the alternator’s internal voltage regulator, whose brushes were worn down to the nubs. I did what I would’ve wanted someone to do for me in that situation—I called the seller, told him what I found, and offered him the car back. He was grateful almost beyond words, but said that the car had to go, and whether that was to me for $500 or to someone else for $1500 (635CSis were still cheap then) didn’t really matter.

After replacing the regulator, the car needed very little to be driven and enjoyed. I swapped in a rebuilt driveshaft to eliminate a driveline vibration issue and dressed it up a bit with nicer wheels. It soon reached the point where the thing that bugged normally patina-loving me was the paint. After all, this wasn’t a car where the whole thing was a bit of a rat; it was a fairly nice car except for the failed clear coat on the roof and trunk.

In 2011, the economy was still struggling to pull itself out of the big 2008 subprime-mortgage-fueled recession. A lot of businesses had closed, and a lot of folks were out of work. I wondered if I could find someone who’d shoot the car cheaply in their garage.

And I did, sort of. I saw an ad on Craigslist for a guy advertising $750 paint jobs. I chatted with him on the phone and learned that he used to run the body shop at a local Ford dealership until he got laid off. I drove the 635CSi to the address he gave me and met him in person. He was shooting cars in zero-cost industrial space borrowed from a buddy who was helping him out. He looked at the car’s roof and trunk lid. “Wow,” he said, “That’s a lot of flaking. That’s all going to have to come off.”

“So, you’ll take those panels down to metal?”

“What about pulling the trim off?” I asked.

He furrowed his brow and walked around the car. “I’ll do whatever makes sense. If you want to pull that rear spoiler, you can, but if you look at it, part of it is painted the body color and part of it’s black. Really, it’d be easier just to mask off the black, sand both the trunk lid and the spoiler, and shoot the whole thing together. If you want to pull the door side moldings off, that would be good. I’ll mask everything else.”

I took the car home, and tried to get the rear spoiler off, but couldn’t, as the fasteners were seized. I also noticed some surprising tell-tale signs of rust around the holes where the fasteners went through the sheet metal. Discretion being the better part of valor, I left the spoiler alone. I did, though, pull the knee-high door and fender trim off.

I dropped off the car at the warehouse. The guy wasn’t great about keeping me apprised of progress. A few weeks passed. Finally, I got him on the phone and arranged to pick up the car.

And … I was disappointed. There was visible orange peel and dust in the paint, and a paint run on one of the rear quarter panels. While this wasn’t surprising in a $750 paint job, I thought it could’ve been better, and diplomatically said so.

“Yeah,” the guy said, “I hear you, but there’s only so much I can do in this space without proper lighting and filtration. But with a wet sanding, it’ll look much better. Tell you what. Give me another hundred bucks and leave me the car and I’ll wet sand it. I promise you’ll like it a lot more. Just be realistic. I mean, it’ll never look like a $5000 paint job.”

A few days later, I picked up the car, and he was absolutely right. There were still imperfections, but the car just popped in the sun. It was the world’s best $850 paint job. It was exactly what the car needed, at exactly the right price.

I had the guy do another job for me after that. I had a ’92 Toyota FJZ80 Land Cruiser that had seam rust at the bottoms of the front doors. He cut it out, welded in new metal, and spot-painted it. I think he charged me $500. I thought, boy, this is great. I’m going to give this guy a lot of business.

Unfortunately, not long after that, his phone number showed up as disconnected. I went back to the space, and there was no sign of him. He was gone.

These days, it’s tough to find middle-solution bodywork and paint. Last year I had a BMW 2002 I was readying for sale. I took it to six Boston-area body shops I used to use back in the day and got quotes on spot repair of surface rust and small dents. None of them would touch it. Most shops seem to have bifurcated into either insurance-only collision repair or open-checkbook restoration work. Obviously, if you own something rare and valuable, you probably want the quality of the work to match the value of the car, but for lower-value cars, there’s no shame in setting a budget, trying to stick with it, and coming out of it with a prettier, shinier car that gives you pleasure.

So, wherever you are, Mr. I-was-painting-cars-out-of-the-back-of-my-buddy’s-Enterprise-rental-location-in-Sommerville, I hope you read this. I have a couple of cars that we could probably do business on.

The Hack Mechanic The chapter is closing on my cheap, convenient car storage
Rob Siegel 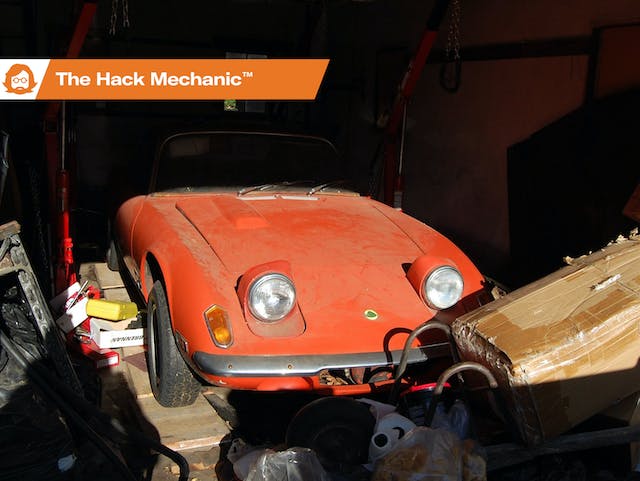 The Hack Mechanic The tale of the Loti: Tantalized by an Elan and Eclat
Rob Siegel 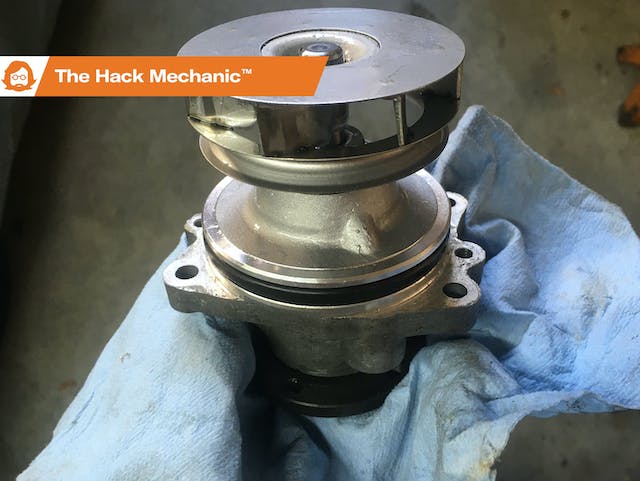 The Hack Mechanic When it comes to old cars, aftermarket parts can be a crapshoot
Rob Siegel 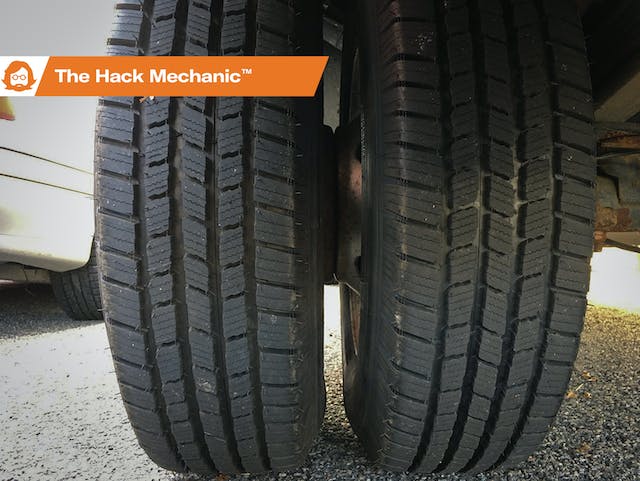 The Hack Mechanic The Dualie Dilemma: A tale of 6 tires
Rob Siegel 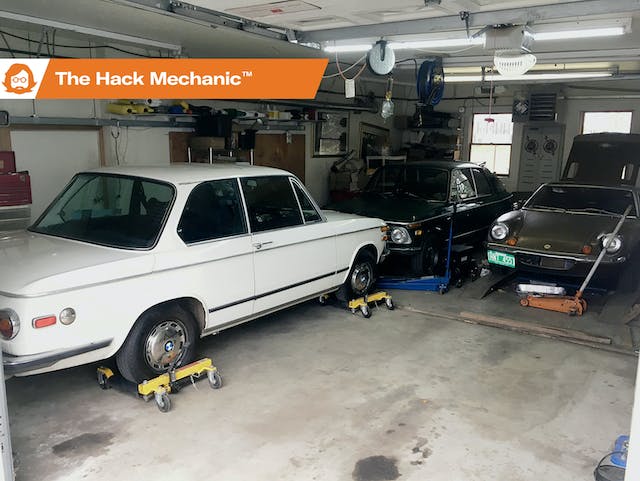