There has been much stewing of late. Necessary thinking, or at least thinking that feels necessary. Years ago, when I worked as a parts guy at a Jaguar dealer in Chicago, my friend Frank MacNaught had a phrase for moments like this. Frank was the dealership’s parts chief, a man who could list, from memory and in chronological order, the 12 superceded part numbers for the driveshafts of the American-market Jaguar X-Type. He tended to verbally summarize complex situations as he met them, a sort of knee-jerk sitrep. Common behavior in parts guys. Whenever world news grew particularly high-volume or concerning, Frank would put his hands in his pockets, lean back against the counter, and eye a shelf of oil filters as if it had insulted his mother.

“Stuff,” he would say, with no small amount of gravity, “is happening on the rock.”

I was young and perhaps more than occasionally a doofus, so I once asked if those words had some deeper meaning or symbolism. He shook his head, chuckling.

“Aw, no. Just a good distraction, helps me think.”

Frank is gone now, killed in a traffic accident more than a decade ago. Were he with us still, in the strange and tumultuous summer of 2020, he would almost certainly find a counter to lean against. We are living in extraordinary times, grappling with extraordinary questions of who we are and the kind of people we want to be. In that light, and as salute to an old friend, I offer a complete lack of substance. A few questions, trivial and unanswered, that have dogged me for months. The sort of thing we used to talk about on slow days at the dealer.

Frank liked Jaguars, but he also liked Suzukis. On nice days, he would ride his GSX-R to work, then sit next to it in the back lot, eating a sandwich and joyfully watching customer X-Types self-immolate in the service bays. There were always a lot of X-Types self-immolating.

It is Thursday, the second of July. Many subjects are on my mind. Some of them might even matter.

What follows, in no particular order, are the ones that don’t.

Apropos of nothing, if sounds were people, which of the following noises would win in a fight: A bevel-drive Ducati 900 SS echoing off California canyon walls, the rip-snarl of a Ferrari 250 TR at redline at Watkins Glen, or the rolling crackle of a P-51 in a low-altitude pass over an English airfield?

On a related note, is it possible to listen to any of those machines, at full honk and in close proximity, without wanting to sell everything and spend the rest of your life following a motorcycle/Italian redhead/warbird around the country like people used to follow the Grateful Dead?

Evolutionarily speaking, why are we drawn to that kind of sound, anyway? The obvious answer is animal roars, some deep-seated genetic appreciation of wild beasts. And yet it doesn’t really hold water: If I were some kind of cave-dweller or prehistoric nomad person, loud animal noises would just make me run away from anything loud and animal. So why do most sane people want to run up to and hug a P-51?

My daily driver is a 1990 Chevrolet Cheyenne pickup. Despite being built in an era when Detroit cared little for rustproofing or paint quality, it has somehow weathered three decades of existence relatively well. Nice truck, in other words, shiny and straight. For whatever reason, however, I do not wash the Chevy as often as I should. This mostly leads to a lot of me looking out the window at the thing in the driveway on sunny afternoons and feeling guilty for not treating it better. When I do wash it, I look out the window the next afternoon and think, “Man, that’s a nice truck. What kind of jerk would park that outside?”

If I’m that kind of jerk (and I obviously am), why does the truck seem happier—run better, ride better, pull harder—when it’s filthy?

How many of America’s trucks do you think go unwashed every year?

That sounds like a 1980s infomercial with Sally Struthers. “For just ten cents a day, you too can help one of America’s hard-working trucks take a bath! Think of the dirty single-cabs! The stepsides and bro-dozers that can’t wash themselves! Won’t you help?”

I’d donate. (You wouldn’t? Think of the bro-dozers!)

Speaking of TV, will Top Gear ever ditch its hoary old formula? The people who make that show seem too smart to keep beating the same old dead horse. Along the same lines, why do all the American iterations just kind of fall flat, running off-song? Is there a future for car television in this country? Why are all the American production companies obsessed with brain-dead automotive-competition-battle shows? We get a lot of pitches to cover these shows. Those documents often overuse the word “best.” Why does it always come down to which car or driver or tattooed person is better?

“Better.” Lazy word. Absent specifics or nuance. You ever wonder if the modern human experience is most properly summed up as a slow departure from nuance? If you’re asking which $30,000 hatchback is the most reliable choice, sure, yes, most journalists can reduce the answer to a letter grade or points tally. But not everything is a binary fight. Some answers are more complicated.

That said, I will totally watch American Ninja Warrior late on a Friday night until my house runs out of expensive bourbon and discount cheese dip or it is Saturday morning, whichever comes first. As Whitman wrote, I contain multitudes. And to paraphrase Thomas Jefferson, I cannot live without books. Or a TV show where men and women dangle from arbitrarily dangerous scaffolding on a giant set while highly paid, thick-necked announcers in tailored jackets go, “Nooooooo!”

I just realized the whole “better is lazy” discussion kind of invalidates that noise question about the P-51/Ducati/Ferrari. Toss that out the window, then. Incidentally, after much thought, of course a P-51 would win; this is America. And to paraphrase John Goodman in The Big Lebowski, when it comes to outstanding noises being shotgunned through the air at high speed, we have rules.

The Ford Mustang Mach-E is here. A dowdy, turtlelike SUV-Mustang product with an electric powertrain. Rarely has a single new vehicle prompted so much discussion about brand fungibility—this idea that, if you build Mustangs or widgets or hamburgers or lord knows what, you can make those items whatever you want, no matter what your name or brand once meant to people, because that name and brand are yours. Who says a Mustang is only a pony car? Apparently not Ford. Are we right to raise an eyebrow? Does this discussion keep me from wanting, very much badly, a Fox-body notchback with frame connectors and an IMSA body kit and maybe 600 naturally aspirated horses that breathe fire and would trample large hoofy drag-strip/road-course footprints all over a turtle-Mustang SUV thing?

Some questions will never have answers.

(Except the Fox-body thing. Of course I still want that.)

How much mustache wax did Graham Hill use? Formula 1 driver, mid-century, famously dashing, mustache like Clark Gable. Hill ran Lotus 49s at Monaco and raced at Indy. Huge speed! A lot of open-faced helmets. That lip sweater had to stay tidy somehow.

Wait … what if he didn’t use any wax?

Similarly, why have so few great racing drivers had mustaches? Hill, Keke Rosberg, Nigel Mansell, Dale Earnhardt, Clay Regazzoni. There are others, mostly in NASCAR, but motorsport is thin on stylish facial hair. Why?

About two months ago, I bought a new lawnmower. A self-propelled pusher, small guy, single-cylinder, on sale. I had never before owned a self-propelled mower, and this feature initially seemed an unnecessary complication. (What kind of grown Sam, I asked myself, can’t push his own lawnmower?)

Two weeks after I brought the thing home, however, an old foot injury flared up. Pushing anything while walking became painful. The mower’s ability to toot along on its own suddenly seemed like a gift. (Answer: This kind of grown Sam can’t push his own lawnmower.)

There are people in this world who race riding lawnmowers. Have any of these geniuses—and I do not use that term loosely—fitted a self-propelled push mower with rubber tires and taller gearing? You know, so that said mower might pull an adult human down the street, like some sort of tiny and overly caffeinated automobile, if said adult human were wearing roller skates and maybe not afraid of large and spinning grass-clipper blades that were never designed to scythe over pavement at 30 mph? Because … that sounds like fun?

Asking for a friend.

The foot injury is actually two foot injuries. I stretched a couple of tendons in each foot several years ago, during a late-night golf-cart-slalom incident in the parking lot at Circuit of the Americas. (A friend and I pulled the limiter off another friend’s golf cart and then proceeded to be stupid.) A doctor recently told me that these stretched tendons would be with me for the rest of my life. (Correction: extremely stupid.)

Further details are unimportant, but the injury raises the following question: If the penalty for being dumb increases as you get older, why doesn’t the joy of being dumb decrease at a similar rate?

Is that last question proof that I should have simply died off several years ago, under the principle of Survival of the Fittest, and am instead simply wasting much of my life and luck watching American Ninja Warrior under the influence of delicious liquor and cheap cheese?

If so, should I want to know? Because I kind of don’t.

Unless, of course, I only have a little time left, in which case, please tell me. Might change a few things.

(Same amount of Ninja Warrior. But we’d switch to the expensive cheese dip.)

This is where I’m supposed to end this list by saying something like, “That’s all I’ve got,” and signing off. Only this isn’t all I’ve got, just some of it. More will probably come later.

At the dealer, Frank always used to end awkward, rambling conversations by just walking away mid-sentence. He told me once that he saw uncomfortable or strange human interactions as research. I never quite understood what he meant by that, but I had to respect how the man had a system. No ineloquent transitions or farewells, just an abrupt end to talking, done and out the door. 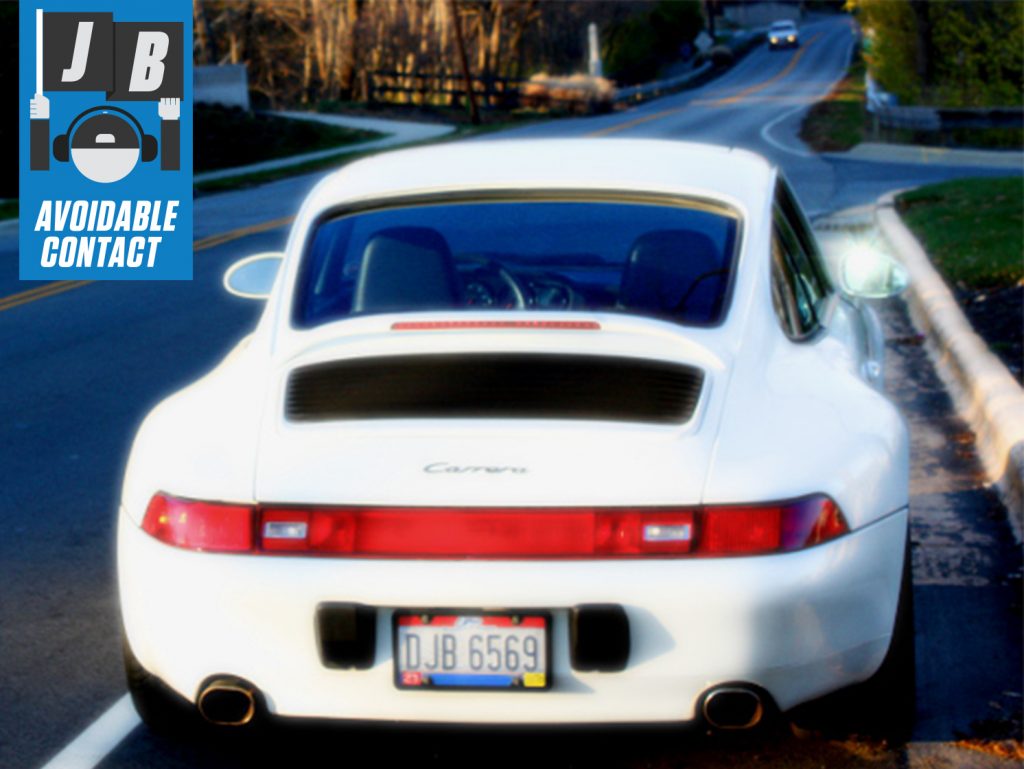