Like many of you, I have a love/hate relationship with SUVs. I harbor nothing but disdain for suburban moms who bought some lifted hatchback with body cladding just because “they like to sit higher.” On the other hand, though, I get downright wistful when I see an older, well-maintained sport utility with serious off-road pedigree. For the past few months, I’ve been keeping tabs on a minty Isuzu Trooper in my neighborhood, not because I want it, but because, at some point, I may know somebody who does.

In car enthusiast circles, it’s pretty standard to have at least a passing interest in Jeeps. Toyota Land Cruisers also seem to be on that unwritten list of SUVs That Car Enthusiasts Are Allowed to Like. Today, I’m going to come clean about my deepest, darkest secret: I love Land Rovers. They’ve been an obsession of mine for a very long time. In fact, when my parents asked me where I wanted to go for my 16th birthday, I asked them to take me to a Land Rover dealership so that I could see the last of the Series II Discovery before it was supplanted by the LR3. Somewhere, on a 3.5-inch floppy disk in a forgotten plastic tote at my parents’ house, is a low-res digital photo of me, sitting behind the wheel of an Alveston Red Discovery HSE7, grinning ear to ear.

This was the tail end of a particularly charming era of Land Rover dealership design in which they had taken inspiration from a delightful combination of an L.L. Bean outlet and your Midwestern grandmother’s house. The showroom, lined in natural cedar like a giant cigar humidor, was crammed full of rustic knick-knacks like mounted trophies, decorative baskets, and artisanal duck decoys. Outside, there was a small, rocky obstacle course where salespeople would show off the prodigious off-road capabilities of their customer’s chosen vehicle to luxury-minded buyers who would never again utilize them. Somehow, the salespeople had determined that the wide-eyed sixteen-year-old boy, dressed head to toe in denim, was not going to leave the dealership in a new Land Rover that day, so no such thrill ride was offered. They were right to make that assumption—I’d already bought a Jeep XJ Cherokee a few months prior that was more in my price range.

Years later, during my very brief stint in luxury car sales, I worked at an INFINITI dealership under a used car manager who we’ll call Dave. A lot of folks maintain an unhealthy habit of seeing themselves as the Main Character in a movie about themselves, but Dave was like a living, breathing action hero, complete with a mysterious backstory, a short fuse, and a clever quip for nearly every situation. Short in both stature and temper, he nevertheless cut an imposing figure within the confines of the dealership, a cold, unwelcoming metal-and-glass box that was worlds apart from the cozy, homey Land Rover dealership I had visited as a teenager.

Dave would sometimes be gone for weeks at a time, on short notice and with little explanation. In hushed whispers, it was eventually explained to me by one of the other salespeople that Dave had some unknown special forces role in the Israeli Defense Force, and it was something of an unspoken understanding that we didn’t ask a lot of questions about it. While he was in the office, though, he was intensely dedicated, and he more or less single-handedly kept the lights on month after month—no small task for an INFINITI dealership in a world where Lexus and Acura exist.

Dave was unrelentingly brutal to his salespeople, myself included. He was good at sniffing out someone’s potential in short order, and he’d either hold you to the sort of high standards he held himself to, or he’d dismiss you as a loser just as quickly. Morning sales meetings frequently consisted of Dave yelling at us, collectively, for not working hard enough. Looking back, it’s safe to assume that Dave saw and did some awful things at his other job, and throwing himself into his work stateside was a sort of coping mechanism. It’s understandable, then, that he had little patience for people who didn’t take their relative comfort seriously and make the most of their opportunities.

Spend enough time around Dave, though, and you’d get to see a tender side of him. Depending on how he judged your character, he’d either take pity on you for trying your best, or at least understand that you really couldn’t do any better. One busy Saturday at the end of the month, he angrily called me into his office. I excused myself from my client and anxiously made my way to his doorway. He calmly asked me if I’d eaten lunch; when I told him I hadn’t, he offered to chat with my client for a few minutes so that I could sneak into the breakroom and eat some of the pizza he’d ordered for us.

Dave didn’t have many hobbies—at least none that I knew about. He was 100 percent dedicated to everything he did, whether it was defending his country from its enemies or defending his dealership from the Lexus store up the street. He was a total rock star when it came to sourcing profitable pre-owned inventory, with one notable exception. Inexplicably, we always had at least one Land Rover—typically a Range Rover Autobiography—parked on our lot. Despite a perpetual lack of customer interest, it was gone nearly every night, only to return in the morning. As it turns out, Dave, like me, loved Range Rovers, but he was smart enough not to own one outright. Like many things about him, it was best not to ask questions. The dealer principals, satisfied with his results elsewhere, had no problem looking the other way despite the fact that they had effectively bought him his dream car over and over with little to no benefit to them.

Eventually, Dave would enlist my help to run special errands for him. One of these errands involved dropping him off at the airport. We walked out to his Range Rover of the month, a copper-colored one this time. As I made my way over to the driver’s side door, he told me that he’d prefer to drive himself to the airport, since he wasn’t sure when he was going to get a chance to do it again. His tone made it sound like he’d be gone for a while—as always, tensions in the Middle East were frequent chatter on the news. I nodded in silent agreement, and it seemed like we both understood what he was getting at.

The drive was mostly silent, and Dave looked as severe and intense as ever. This time, there was a hint of concern furrowing his brow. It was a vulnerability I hadn’t seen in him before. I decided that I’d try to make small talk in the hopes that it would distract him from whatever he faced in Tel Aviv. We started talking about Range Rovers, and he seemed to loosen up a bit. As we neared the airport, the highway split into two sets of parallel lanes, with one handling airport traffic, and the other continuing into nearby Berea. Dave missed the interchange, flicked on his turn signal, and dipped down into the median, cutting diagonally across the grass and climbing out the other side to merge into the feeder lanes for the terminal. All this excitement transpired in the span of a few brief seconds. Dave’s foot never left the accelerator, and I never felt a thing. “That’s why I love Range Rovers,” he said, in his typically laconic way.

Today, I still carry a torch for Land Rovers, in spite of their notorious reputation for downright abysmal reliability. In fact, that unique combination of luxury, capability, and unreliability somehow make them more appealing to me. Lots of expensive cars make the statement “I have arrived!” to the general public. Only a Land Rover tells the world that you’re already so successful that it doesn’t matter if you arrive at all. 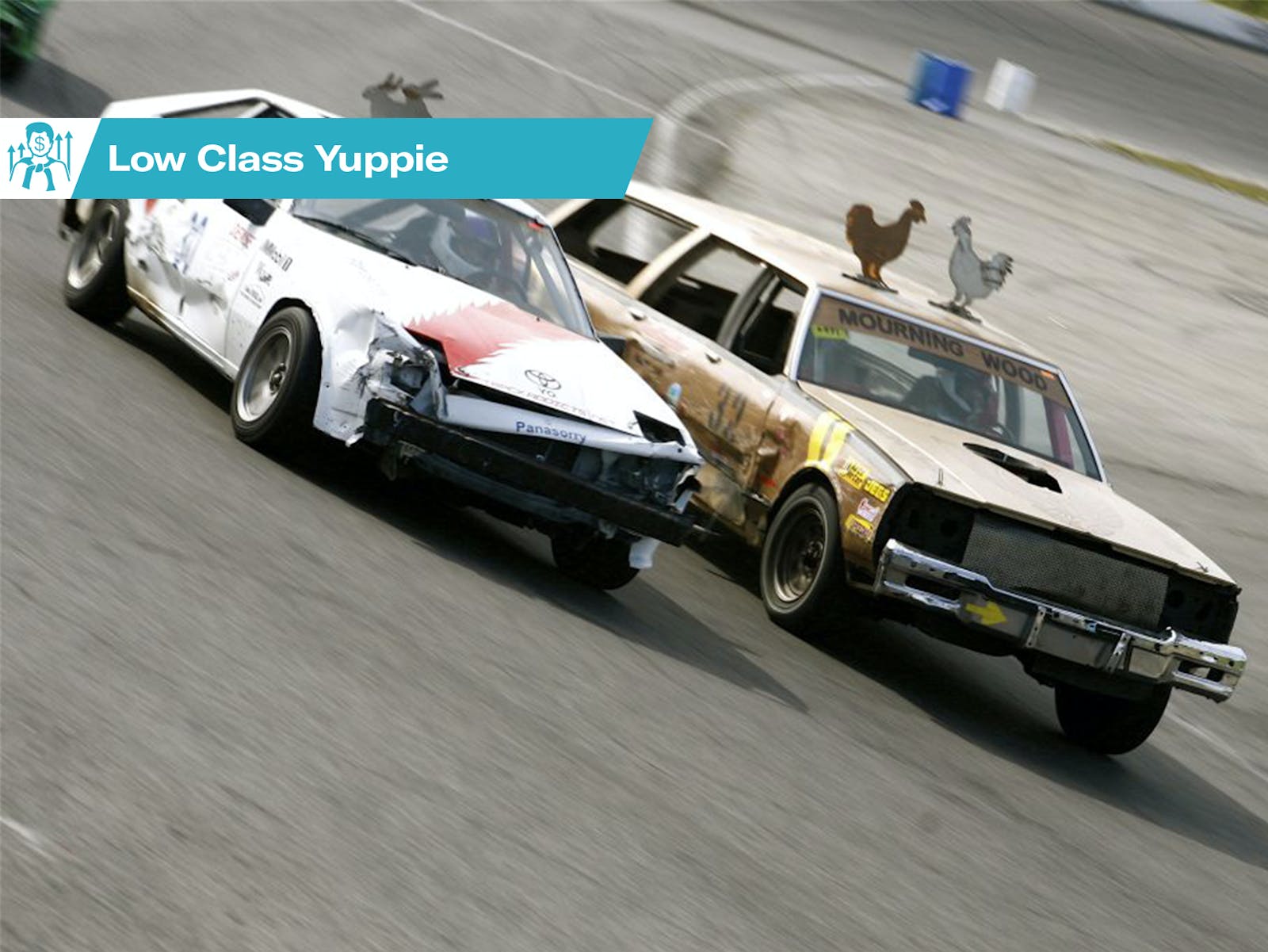 Get an insurance quote
A Story About
Share Leave comment
Read next Up next: Packard plant owner misses another deadline, is now in contempt of court