The 1980s were hard on Cadillac Motor Division. In the 1960s Cadillac could do no wrong. But in the ’80s it seemed they made misstep after misstep. Part of this was due to changing times and tastes and the ever-increasing encroachment of German and other European luxury cars. True, changes had to be made. Fuel economy had to be improved, dimensions reduced, and technology added. But there is no doubt that the first half of the decade were painful years for Cadillac.

Cadillac could do no wrong in the ’50s and ’60s. It consistently outsold both Lincoln and Imperial and was essentially in a class of its own. But as the 1960s progressed into the early ’70s, Cadillac perhaps became a victim of its own success. The cars slowly became less special as the automaker chased ever higher profits—and was rewarded with higher and higher production records. Starting around 1969, Cadillac started skimping on interior materials.

What had been chrome-plated hardware was replaced with flash-plated plastic. Real wood trim on the Fleetwoods was replaced with the soon-to-be ubiquitous wood-grained vinyl, al.though this was at least in part to new safety requirements for interior components. Slowly but surely, Cadillacs had more in common with its B- and C-body corporate siblings. At the same time, Chevrolets—especially the Caprice—became even more Cadillac-like. The 1971 Caprice in particular looked like it was three-quarters of the way there, inside and out.

Nineteen-eighty would be the last time for several years that you could purchase a Cadillac and not worry about potential mechanical mayhem … or lack of the power expected of GM’s finest. The 368-cubic-inch V-8 was robust and reliable, if somewhat detuned from the earlier 425. The new styling of the ’80 Cadillacs was quite attractive too, perhaps better than 1977–79.

In 1981, the ill-fated V-8-6-4 engine management system was added, but the 368 still resided under the hood. It was a good idea but was introduced just a bit before it was technologically ready. The cylinder displacement module sometimes was rather jerky when switching between four-, six- and eight-cylinder modes—or sometimes simply not work at all.

It could be disconnected as easily as cutting a single wire, but the well-heeled folks who were buying new Cadillacs found such a solution unacceptable. The system should work—or be able to be fixed—and reliable. It wasn’t, and Cadillac’s reputation suffered. The V-8-6-4 was eliminated in 1982 for all Cadillacs, save the Fleetwood limousines. Apparently, those ’82-and-up V-8-6-4s were updated and much more reliable. They remained in the limos through 1984.

The 1982 model year brought the all-new aluminum block HT4100 “High Technology” engine with digital fuel injection. It was in response to ever-tightening CAFE regulations, and it was not exactly a powerhouse. Reliability and driveability problems were common, especially in the early years.

The new engine was designed for the upcoming smaller front-wheel-drive Cadillacs, but circumstances put them into the larger Cadillacs before then—meaning the engines had to lug more weight than they were perhaps designed for. Some were OK; a friend of mine’s father-in-law had a 1984 Seville that lasted into the late ’90s on its original engine, racking up over 145,000 miles before it said uncle.

Another friend of mine, Jayson Coombes, had an ’84 Seville Elegante. In 2018, he drove it from Fort Worth, Texas, to the CLC Grand National in San Marcos. It was a 1085-mile round trip, and the Seville made it without a hitch. This is not to say the 4.1-liter engine didn’t have its problems—it did. Acceleration was, shall we say, leisurely. Kind of like the 1979 Lincolns with the 400 V-8. You’d get there, but not quickly.

Thus the 1982–84 de Villes and Fleetwoods weren’t exactly hot rods, but at least they still were large and Broughamy. That would change for 1985 when Sedan de Villes, Coupe de Villes, and Fleetwoods went on a serious crash diet. The 4.1-liter engine would remain, but it would be hauling a lot less steel in these newly shrunken models, so it wouldn’t have to work so hard. It was the first transverse-mounted V-8 in regular production, a feat promoted heavily in Cadillac literature and advertising.

They were introduced as early 1985s in March ’84, and although they had more space and were certainly more driver-oriented, certain people (namely, people who never bought or owned or perhaps even drove a Cadillac) had a hard time taking them seriously as Cadillacs. Yet they sold. For ’85, a total of 42,911 Fleetwoods and 108,852 de Villes were built. In addition, 45,330 early-’85 models were built: 9390 coupes and 35,940 sedans (combined Fleetwood and de Ville production).

For comparison’s sake, in 1984 a total of 114,610 Coupe de Villes and Sedan de Villes were made. Granted, that was a short model year with the March ’84 appearance of the new FWD cars, but still, the new Cadillacs were not a flop as some folks may claim. With the exception of the Fleetwood Brougham, which remained as before in all of its full-sized Broughaminess, all de Villes and Fleetwoods rode a much-reduced C-body platform, shared with the Buick Electra and Oldsmobile Ninety-Eight.

If you had to have a GM luxury car in 1985 and weren’t totally enamored of the new shrunken C-body Cadillacs, Buicks, and Oldsmobiles, you could still get a truly fullsize Delta 88, LeSabre, Parisienne, or Caprice—not to mention the aforementioned RWD Fleetwood Brougham. Despite the drastic change of all three of the C-body GM luxury cars, they all sold pretty well. Not everyone loved them like they loved the 1977–84 versions, but sales were respectable.

So, the $64,000 question is why did the big GM luxocruisers shrink so drastically? After all, Lincoln gave a slight aero facelift to the Town Car in ’85, and it sold very well with only minor changes through 1989. In GM’s defense, during the early ’80s most people thought gas prices were going to go through the roof. After the second gas crisis in 1979, gas was expected to hit $2 a gallon in a few years, so GM designers had to adapt Cadillac styling cues onto a much smaller platform.

They designed these cars under a worst-case scenario, and the shrunken Cadillacs were the result. All four de Ville and Fleetwood models had a 110.8-inch wheelbase, with an overall length of 195 inches and 71.7 inches width. To put that in perspective, the unchanged Fleetwood Brougham’s dimensions were 221 inches long and 75.4 inches wide, and it rode a 121.5-inch wheelbase. But the new FWD cars actually had improved headroom and legroom in the front seat and were still true six-passenger vehicles.

Not much changed for 1986. Coupe and Sedan de Villes received the wider chrome rocker moldings of the ’85 Fleetwoods, and the bumper rub strips changed from black to dark gray, but that was about it visually.  Production in ’86 was 36,350 coupes and 129,857 sedans. For some reason, Cadillac lumped Fleetwood and Coupe/Sedan de Ville production together that year. The next model year brought composite headlights, a new eggcrate grille, and slightly extended rear quarter panels with new taillights. This added an extra 1.5 inches to overall length. The Fleetwood coupe was gone, with only a single Fleetwood d’Elegance sedan available.

The big news for 1988 was a new engine, the 4.5-liter V-8. It was an enlarged 4.1, but it was much more robust and reliable. Cadillac offered a new six-year, 60,000-mile powertrain warranty to back it up. Both Coupe and Sedan de Villes continued to be offered. The full cabriolet roof, first offered in 1987, was still available on Coupe de Villes. It actually did look like a convertible, as long as you were nearsighted enough that you didn’t notice the cut lines for the faired-in doors. You could also get a formal cabriolet roof in vinyl with opera lamps on the Coupe, or the standard painted steel roof—probably the least common choice.

In 1989 these cars would get a substantial facelift with more Cadillac-like proportions, which would take the basic 1985 front-wheel-drive platform all the way through the ’93 model year. Our featured Cameo Ivory Fleetwood Coupe was seen on eBay back in 2016. If you’ve read enough of my columns, you know I have a thing for yellow Cadillacs, so I had to save the pictures to “The Vault.” The Sable Black Sedan de Ville was more recently spotted on Marketplace in January 2022. It was the nicest ’85 I’d seen in some time.

These cars aren’t particularly collectible yet, but their front-wheel-drive platform set the template for most Cadillac sedans all the way up to the 2019, when most Cadillac sedans were eliminated for those dastardly combovers! But I can see one of these today and remember when they were all new and so very different from Cadillacs of the recent past. 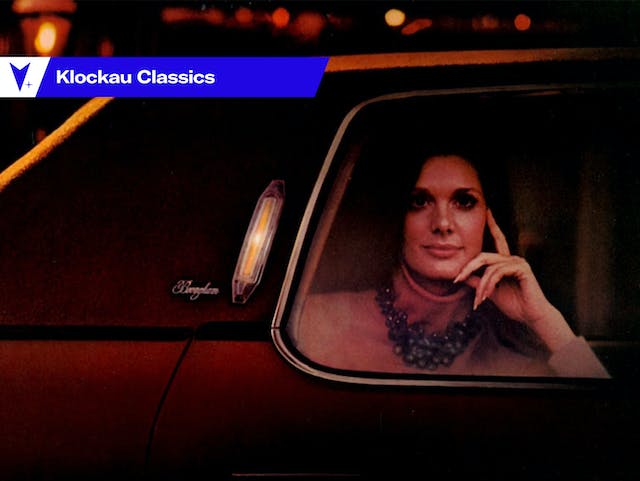 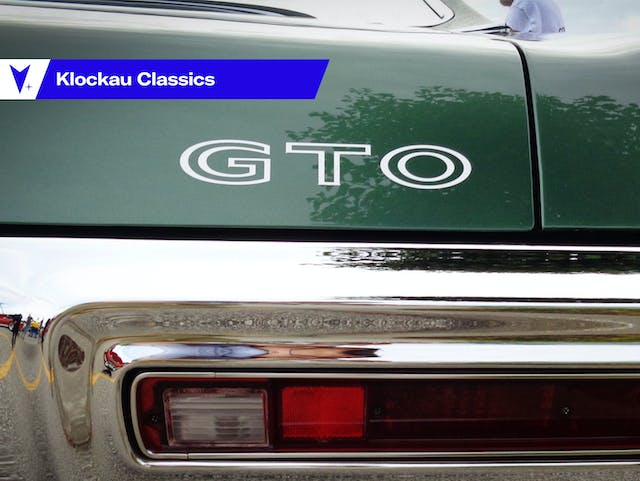 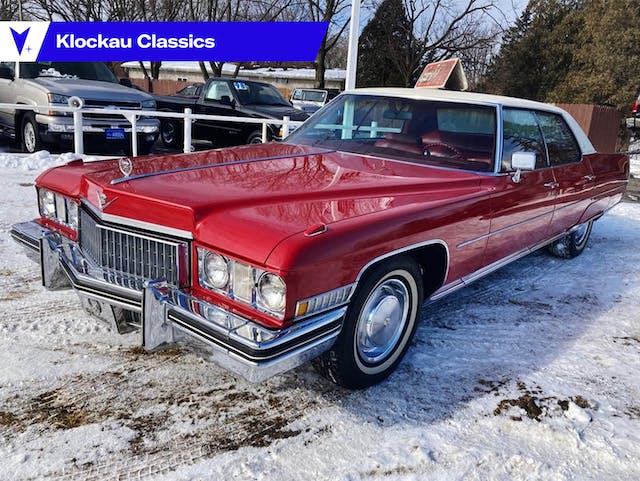 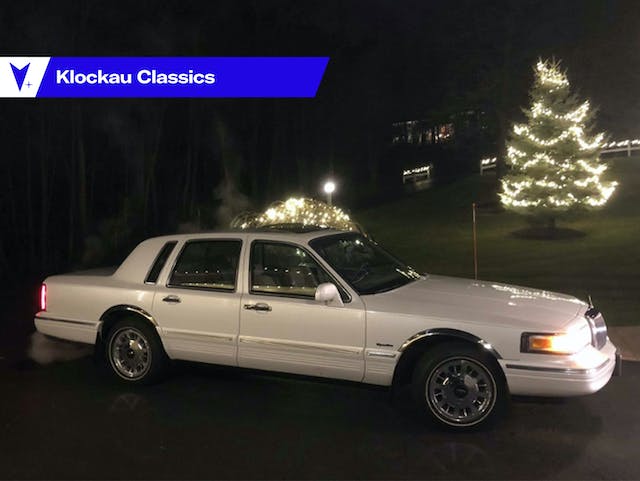