Please welcome Brian Makse to our regular writing staff. If you’re not already familiar with his extensive YouTube channel, where he reviews everything from the Shelby GT500 to the Subaru Impreza, here’s an introduction written by the man himself. When he’s not filming cars or racing them, Makse will be trekking across The Great White North to bring you regular installments of fascinating stories of Canadian car culture in his column, “The Elsinore Files.”  — Ed.

I like to think I’ve got my finger on the pulse of cool car culture and industry in my part of Canada. Heck, I competed in my first sanctioned race at Canadian Tire Motorsport Park (née Mosport) in the early ’90s and have taught right seat and trackside for decades. Most of my friends are either in the business of cars or downright car-crazy.

As one does today, I received an invitation on social media from DriveTeq to join an open house at a climatic wind tunnel in the Toronto area. I was astounded that I’d never heard about this facility. I knew that wind tunnels are few and far between in The Great White North, but how had I missed one with climate-replicating capabilities?

Located on the north side of Oshawa, Ontario Tech University may be a relatively young school—it was founded in 2002—but its Automotive Centre of Excellence (ACE) is Canada’s best-kept automotive secret. Perhaps it should be considered a secret weapon.

A firsthand look at its wind tunnel drew me to the event, but it became abundantly clear that ACE doesn’t serve the automotive sector exclusively—and the wind tunnel is hardly its only contribution to engineering.

Shortly after arriving at the facility, John Komar, ACE’s excitable executive director, pointed me around the building. Many of us are familiar with four-post shaker rigs, which ACE has; but this particular one can also mimic climate conditions.

Komar’s been with the school for years and he’s clearly passionate about automotive engineering innovation. He’s an accomplished business leader who avoids small talk. “It’s a $100 million-plus facility that we have here for automotive development, but not just automotive,” he says, within minutes of meeting me. “It’s for technology, but is actually experiential. It’s actually market-driven and it fosters innovation and development that serves both industry and academic needs.”

“We deal with most of the OEMs and the tier-one suppliers,” Komar continues. “We have the most sophisticated climatic wind tunnel in the world today. We’ve got three stories of heat exchangers, for temperatures ranging from minus 40 to plus 60 (Celsius). We can get a snowstorm at a click of a mouse. We can drive ice, fog, rain, snow, blizzard, and then turn around [and make the environment] sunny and hot with full-spectrum UV. You can’t control the weather, but in here we can.”

In the near future, ACE will have an ace up its sleeve. “We will have a world-class moving ground plane aerodynamic force measurement system,” Komar says. (A moving ground plane is essentially a massive belt rolling underneath a car; it’s used to simulate a vehicle’s on-road behavior.) The moving ground plane will join ACE’s climate-replicating four-post shaker and wind-tunnel chambers; together, these three setups place ACE at the cutting edge of automotive development.

“Matter of fact,” Komar says, “We do our labs for aerodynamics right here (in the wind tunnel). We bring in a race car and we do our lecturing here. We put it on the wall. They get to play with Bernoulli’s Equation by playing with the actual elements, so they get a real hands-on experience.”

Dr. Steven Murphy, the university’s president, is clearly proud of ACE, particularly in light of General Motors’ decision to end vehicle production at its plant in the south end of Oshawa. ACE is a ray of light for automotive engineering in the region.

“Through a facility like this we’re training the engineers, we’re training the highly qualified talent that’s going to be required in the Canadian marketplace to really keep us competitive, and that’s really gratifying,” Murphy explains. “Not only are we leaders in engineering—and we draw people into that—but, because of that, there are other applications that we can multiply. For instance, because of the data that we gather here, we’re leading the world in AI and how to use that data—you can imagine the reams of data that come through a place like this. It allows our data scientists to become better, and ACE allows us to reinvent what it means to be in Oshawa in the automotive scene.”

Montreal’s Fiona Man was looking to study automotive engineering when her father pointed her toward ACE. Her decision to study at the school was an easy one.

Man’s instincts were right. “When I came here, it’s the small classrooms, the professors, and the student relationships that I really enjoy. And because of that, and because of all of the other facilities that we have, I think that a lot of students can benefit from the experience that they have here,” she says.

Headlining ACE’s open house was Larry Holt, chief technical officer and engineering guru at Markham, Ontario’s Multimatic, Inc., the automotive supplier known for building the 2016– Ford GT as well as special projects like the Aston Martin One-77 and the Mazda RT24-P IMSA prototypes. At this event, Holt is treated like a rock star: fans seek selfies and wait anxiously to get a word in with one of the greatest automotive engineering minds of our time. 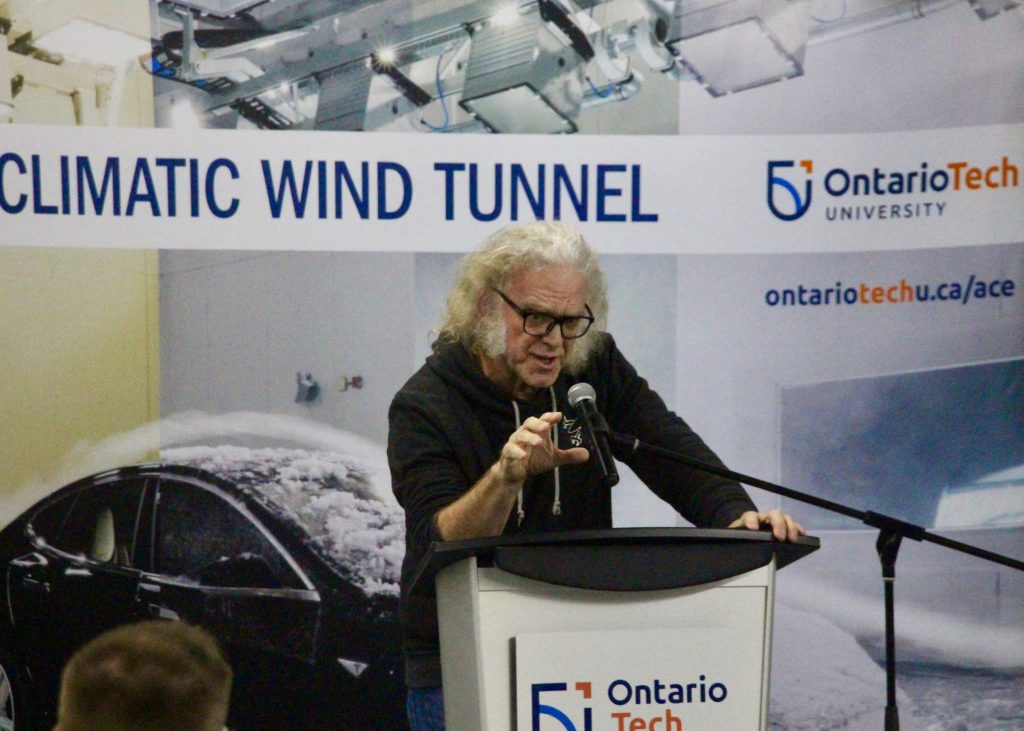 Holt has been one of the champions behind ACE and was a relentless supporter of the school’s mission to build a world-class engineering facility. “The big trick here was [that] it’s going to have a thousand-horsepower dyno and then it has to have a moving ground plane. How do you … do that?”

In the early stages of this project, the climatic wind tunnel and the moving ground plane almost didn’t happen. “They ran out of money and time and they couldn’t put the moving ground plane in the ground,” Holt recalls. “I said, you gotta protect the space below. So, if you go below the wind tunnel, there’s a … great empty space, a garage, and the dyno sits up on this huge frame on air bearings and you can drop it and turn the air on, and this huge thing that weighs many tons can be moved out of the way and put it into a garage.”

The future looks bright for ACE’s graduates. With Multimatic’s close connections to the school, the firm often hires students straight after graduation. “I can tell you twenty success stories of students coming out of here and coming to Multimatic,” Holt says. “One of the students that came out of here now is the general manager of one of our newest plants.”

Komar echoes Holt’s enthusiasm for graduates’ future prospects. “They get scooped up everywhere.” He beams. “As a matter of fact, all the OEMs scoop these graduates up so fast—it’s not funny.” 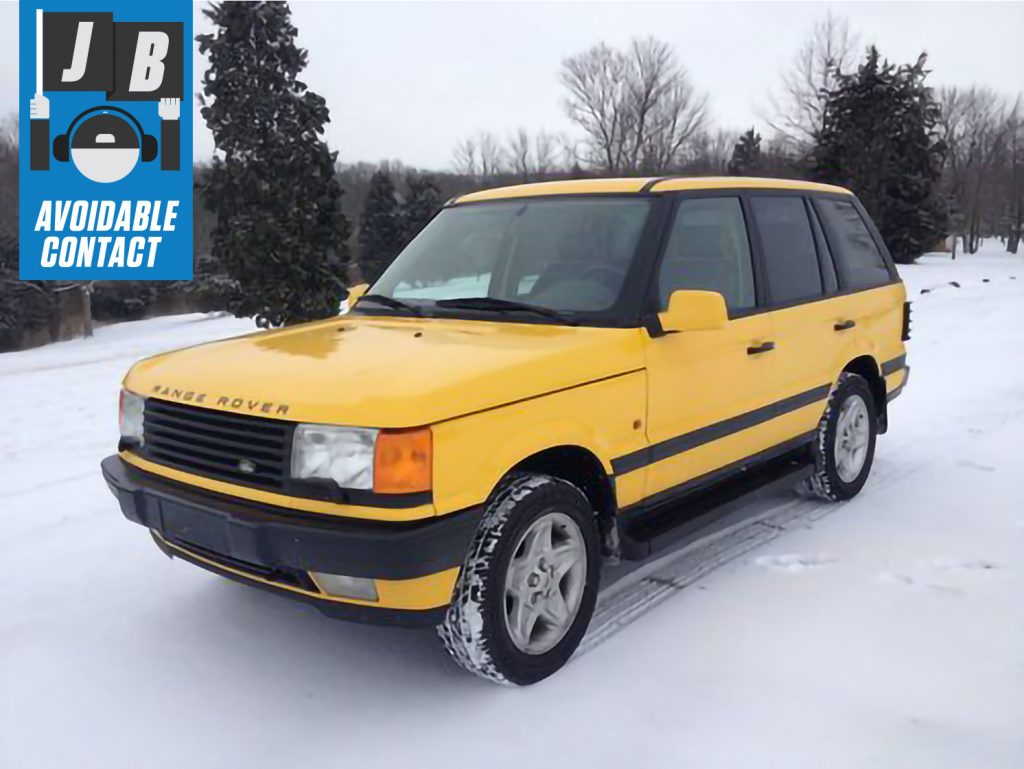