I’ve touched on the 1986–91 Cadillac Eldorado in the past, but I haven’t written anything about its sibling, the Seville. Until now. Like the Eldorado, it was round two of GM’s corporate downsizing (the Eldo had previously been trimmed down in 1979) and followed closely on the heels of the de Ville/Fleetwood’s similar shrinkage as early 1985 models.

So, by the mid-’80s, leaner and lighter Cadillacs weren’t exactly new. The general consensus, however, was that the 1986 Eldorado and Seville were a bridge too far. Downsizing may have been unavoidable, but these new offerings seemed just a little too small for Cadillac Motor Division.

The original Seville, which I previously chronicled, was first a hardtop version of the Eldorado from 1956–60, followed by the K-body 1976–79 sedan, with its Rolls Silver Shadow like “sheer” styling. For 1980, it moved to the FWD Eldorado chassis, becoming essentially a four-door Eldorado with neoclassic bustle-back sheetmetal. While I consider the 1976–79 Sevilles fresh and modern, the 1980–85 Sevilles seemed like something your great aunt Gertrude would love, rather than the well-to-do thirtysomethings who bought 1976–79 Sevilles and drove to the country club for tennis.

That doesn’t mean I don’t like the 1980–85 Sevilles, but the styling seemed to appeal to, shall we say, Charles Montgomery Burns types rather than the young yuppies who were then starting to flourish. Cadillac may have thought the same, as the all-new 1986 Seville was much more modern.

In November 2021, I ran across this fine example on OfferUp, an online sale website, via a Facebook group run by a friend of mine, Finding Future Classic Cars. I was gobsmacked by this particular example and its spectacular color combination, and I vowed to finally give the Mini Me Seville its 10 minutes of fame.

Despite the many cries of angst online about the 1986 Seville and Eldorado, there were improvements. One nice feature on all Sevilles, plus the Eldorado Biarritz, was genuine American Walnut trim inside, the first appearance of genuine tree trimmings since 1966, I believe. I am also particularly taken with the Elegante’s sew style on the seats. Modern yet elegant, it still looks good today.

The Elegante model had been part of the Seville lineup since 1978 and made what was already a very nice luxury car extra flossy. Per the 1986 brochure, Elegante standard features included power recliners with power lumbar adjustment for the front seats, front seatback storage pockets, and wire wheel discs. Two-tone paint was also included (as seen above in the 1986 color chart, there were some very showy color combinations), the aforementioned walnut wood trim, deluxe Tampico carpeting, and chrome exterior accent molding, among other extras.

As had been the case since 1982, Sevilles were powered by the 4.1-liter Cadillac-exclusive V-8. In 1986, it had 130 horsepower at 4200 rpm. Sevilles rode a 108-inch wheelbase, had a 188.2-inch overall length, and power was transmitted through a four-speed automatic transmission with overdrive and a viscous converter clutch. Curb weight was 3426.4 pounds.

That was pretty close to the size of the 1986 Chrysler New Yorker, though the Seville was about an inch longer, and its wheelbase was 4.7 inches longer. The Caddy also had a V-8 instead of the Chrysler’s four-cylinder, but was also about twice the New Yorker’s suggested retail price. 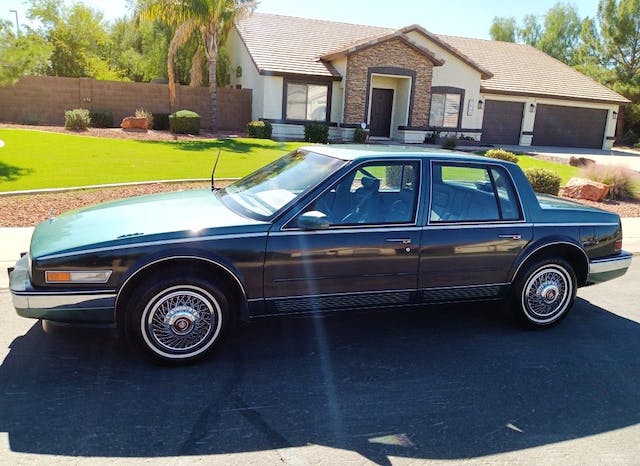 With the exception of the Fleetwood Brougham, 1986 was the first year that every new Cadillac was front-wheel drive and modern. It was also confusing because in 1985–86 there were two Fleetwoods: The Fleetwood Brougham, looking mostly the same as it had since 1980, and the Fleetwood, which rode the new FWD C-body platform, same as the Coupe de Ville and Sedan de Ville. And in case you were wondering, that large and in charge Fleetwood Brougham had a base price of $21,265 for the 1986 model year (just over $54K today).

As for today’s featured car, it was on offer for $7500 in Gilbert, Arizona, when I spied the ad. The seller’s grandfather bought it brand new and was the only owner. The car was always garaged and seldom driven. When I wrote this story it was still available, but who knows if it’s still around or in the hands of a Cadillac collector by now. I hope it is. Just 19,098 Sevilles of all types were built in 1986. Cadillac sold 281,683 cars overall for the model year.

There’s still a lot of derision of these 1980s Cadillacs, but I like them. I don’t love them, but I grew up when they were on the road, so I’ll always have a soft spot for them. As a final note, I’d like to thank pal Jayson Coombes for IDing the color combination on this particular Elegante: Emerald Firemist over Black Emerald Pearlmist with Medium Emerald accent stripe and Emerald leather interior. A striking color combo, and one neither I nor he had seen before.

If I had the room, I would have already bought it for the color combination alone!

Get an insurance quote
A Story About
Share Leave comment
Read next Up next: Piston Slap: Putting a Courier’s leaks to bed?