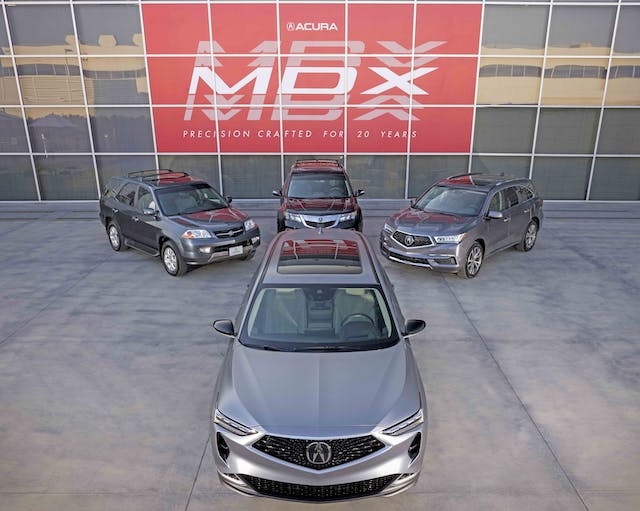 RIP to Acura’s RLX sedan. The former flagship has gone to the big alphanumeric name soup in the sky, proving once again that buyers don’t want to spend big money on a big sedan. Crossing over to fill the gap is the 2021 MDX, shown here under a loosely held definition of a prototype: Everything looks ready for production. The design is evolutionary, and rightly so; the MDX is a popular luxury CUV that Acura says has been “America’s all-time best-selling three-row luxury SUV” from 1980 to 2020.

The MDX’s appeal is logical: spacious three-row seating, smart looks, decent luxury, excellent service after the sale, and value pricing. Wait, what? Indeed, I remember when someone could take an MDX home for a triple net deal (invoice price minus all factory kickbacks) if you asked the right questions (and asked them nicely). Not to say the outgoing MDX was a slouch, but the 2021 concept clearly takes it farther upmarket.

The exterior is sleeker and hunkered down, thanks to a wider stance and wheelbase that’s grown three inches. The look outclasses the previous MDX around the front fenders, and the C and D pillars have a more chiseled quarter window design than their predecessor’s. Body-color door handles blend into the body, creating the presence needed for a flagship vehicle: Perhaps this is the role the MDX was born to play.

The beefy 21-inch wheels are par for the CUV course, while a strong center crease adds a bit of tension. The modern taillight design and more organic contouring are a pleasant change from the outgoing model’s now-dated posterior. The rear bumpers are thin, but they still look legal enough for production.

A far more assertive front fascia includes a deeper lower valence with lines that naturally transition to large cooling ducts/fender air curtains at each side.

The last MDX interior was certainly dated: in the 2021 “prototype,” modernized connectivity (twin 12.3-inch screens for instrumentation and infotainment, respectively, the latter being a touchscreen), snazzy accent lighting throughout, and a BMW-like combination of fancy seat seams with contrast piping looks suitably contemporary, luxurious, and flagship-worthy. The trendy open-pore wood also gets a dash of metallic flake, and both the dash and steering wheel are upholstered in two-tone leather.

While eschewing fashionable audio cobranding, Acura’s in-house ELS system now has over 1000 watts of power feeding 22 channels and 25 speakers. Six speakers are mounted in the ceiling while mid-range drivers have carbon-fiber cones and cheesy light rings. Tuned by Grammy-winning music producer Elliot Scheiner, odds are that the title of MDX’s top stereo option—”Signature Edition”—carries some weight.

The whole package sounds mighty impressive, as the new MDX is underpinned by a new “light truck platform.” (Per Acura’s designation. This beefy front-wheel-drive chassis is probably closely related to the Ridgeline’s.) The MDX comes with two engine choices: a base 3.5-liter V-6 (and a 10-speed automatic) and, for the Type S, a 3.0-liter turbocharged V-6 good for 355 hp and 354 lb-ft of torque. All-wheel drive is of the torque-vectoring variety and comes standard for the forced-induction Type S. What represents real cause for celebration is another return of Honda’s legendary double-wishbone front suspension, a system that leaves the cheaper MacPherson struts in the dust.

Double wishbones could very well be the deepest, most meaningful reason why the 2021 MDX is indeed Acura’s true flagship vehicle. Pricing hasn’t been announced, but let’s hope these serious upgrades don’t make an entry-level MDX too arrogant. We shall learn more closer to the MDX’s release early next year.

The Manifold ’60s Toyota sedan on world stage, Lambo to Le Mans in 2024, a Moke for Bond fans
Hagerty