Intake: Using a streamliner first raced at Bonneville in 1957, Team Vesco driver Eric Ritter has set a new electric-vehicle speed record with a 353-mph average. The record—for the largest, most powerful electric streamliners on the salt—was previously set by the Buckeye Bullet team from The University of Ohio in 2004: 314.958 mph. After using a string of gasoline engines to set numerous records on the salt, the #444 car was given an electric makeover with help from reVolt Systems.

Exhaust: The recent outings in this car have been incredibly impressive, especially considering how far Team Vesco was able to up bump up the previous record. As more manufacturers enter the electric car marketplace with increasingly powerful motors, we should see more teams take on these records and create even more competition. 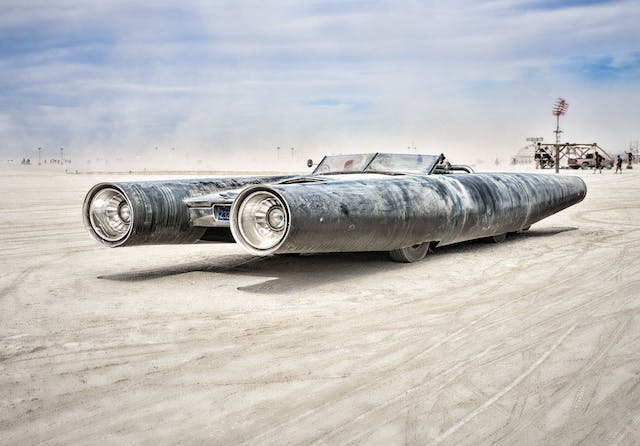 Intake: For those unfamiliar, Burning Man is an epic party in the Nevada desert where costumed participants gallivant about a temporary town for a week in search for anything from metaphysical enlightenment to just a damn good time. For years, California-based artist David Best has erected massive temples in Burning Man’s momentary metropolis Black Rock City, for the annual dance in the desert. These structures, fabricated largely from wood, are burned to the ground in a fantastic bonfire. For communicating across the dry lakebed, or the “Playa,” while building a temple in 2018, Best and his team transformed a 1973 Cadillac into the “Rocket Car.” Compared to many of the Mutant Vehicles roving Black Rock City, the Rocket Car’s Detroit origins are somewhat obvious. (It’s all relative when you’re rolling with pirate ships and other desert parade floats.) The preauction estimate for this 40-foot rolling sculpture was $30,000–$50,000, and at the time of publication the winning bid stands at $12,000 with just over a day left.

Exhaust: Unlike many of the spiritual and ontological revelations you may experience at Burning Man, this Rocket Car is a tangible souvenir from the desert rager. Plus, Burning Man’s Department of Mutant Vehicles states “… just because you have been licensed in the past does not mean you are guaranteed a license in subsequent years,” so the Rocket Car’s esteemed origin might be a worthy leg-up on other prospective licensees. If you’re a fan of art cars, or have always wanted a non-disposable David Best piece, this, like tickets to Burning Man, is a bucket-list buy.

Intake: The overlords of Grand Prix racing have announced that Formula 1 cars will run on 100 percent sustainable fuel from 2025. That’s the same year new engine regulations come in to replace the 1.6-liter hybrid V-6 units currently powering the sport. Exact details of the new engines have yet to be revealed but they will also rely on even more electrical energy than today’s motors, although that power will exclusively be generated by kinetic energy recovery, known as MGU-K, as the complex MGU-H systems which uses exhaust gases to produce electricity is being ditched. Fuelling the cars will be a carbon neutral synthetic e-fuel, which may be produced from carbon dioxide captured from the atmosphere, harvested from food or agricultural waste, or generated by algae.

Exhaust: Guess who else is a big fan of the potential of e-fuels? Why Porsche, of course, who F1 has been courting for quite some time. This move might be just enough to get the German brand to join the circus.

Intake: The upcoming all-electric version of the Chevrolet Silverado will make its public debut at the Consumer Electronics Show (CES) in Las Vegas on January 5. Chevrolet shared a teaser image highlighting its fixed glass roof that will be available on the retail model.

Exhaust: We’re eagerly awaiting this reveal to see if Chevrolet has decided to keep the electric Silverado looking like its current production models, like Ford has chosen to do with the F-150 Lightning, or if it will take advantage of its new Ultium platform to radically differentiate this all-new pickup.

Intake: Lancia’s 115th birthday present to fans is confirmation that the Italian brand will bring back its Delta hatchback. Lancia CEO Luca Napolitano told Corriere Della Sera, “It will return and it will be a true Delta—an exciting car, a manifesto of progress and technology, and obviously it will be electric.” Under Stellantis ownership Lancia, is to become an all-electric brand, debuting its first crossover EV in 2026 with the Delta to follow a year later. Currently Lancia makes only the tiny and aging Ypsilon for its home market.

Exhaust: The new Delta will need some scoot to live up to the legend. However, since the Stellantis STLA Medium architecture has been designed to work with front-, rear-, and all-wheel drive EV powertrains, there is potential for something entertaining. Or Lancia could just rebadge a Hyundai Ioniq 5, which kind of looks like a reimagined Delta already.

Intake: Citing “industry-wide issues relating to the COVID-19 pandemic,” organizers of the Geneva International Motor Show have “postponed” the 2022 event, scheduled for February, “allowing for a more impactful show in 2023.” Maurice Turrettini, president of Geneva Motor Show committee, says organizers “pushed very hard and tried everything” to hold the 2022 event, but to no avail. This will mark the third consecutive year that the Geneva Motor Show has been “postponed.”

Manifold: The iconic Geneva International Motor Show has been a launchpad for new vehicles since 1905, and it attracts more than 10,000 journalists and 600,000 visitors. Postponing the event—technically, canceling it—is a big blow for automakers and enthusiasts. Let’s hope that the world’s physical and economic health is much closer to “normal” in 2023 so this doesn’t happen again.

Intake: Four years after the birth of its first hands-free driving system, Super Cruise, GM’s announcing its most capable copilot ever—Ultra Cruise. Designed for “95 percent of all driving scenarios,” GM’s ultimate ambition is for the system to work on every paved road in the States and Canada. That means over 2 million miles of ability upon launch, with an ability to grow to nearly twice that, at 3.4 million miles. As impressive as that seems, Ultra Cruise doesn’t appear to signal the end of the road for incumbent system Super Cruise; GM’s intending to offer the systems in tandem by relegating Super Cruise to its mainstream models and reserving the former for its high-end stuff. “The combination of Ultra Cruise for premium offerings and Super Cruise for lower-cost products will enable us to offer driver-assist technology across price points and segments,” says executive, Doug Parks. GM is targeting select 2023 models to usher in its latest autonomous technology, with Cadillac tagged to make the introduction. (Our money’s on the 2023 Lyriq.)

Exhaust: For an automaker to cook up projects like the Ultium BEV platform, the Ultifi cloud-based software platform, and Ultra Cruise in-house demonstrates a streamlined competitiveness that should serve GM well in the long-term, tech-heavy future. Still, the pain point in autonomous (or nearly autonomous) driving is policing the operator’s attention span, since the system itself inherently encourages laxity behind the wheel. Ultra Cruise’s improved dynamic display is designed to help users stay alert, but that just begs the question: Which is more stimulating—doing the driving, or watching over the thing that drives? For now, expect Ultra Cruise to be a Level 2 system, like Super Cruise, with a larger range of availability and a few party tricks.

Get an insurance quote
A Story About
Leave comment
Read next Up next: Meet the fix that kept the Ford Pinto from exploding