Bugatti and Rimac in electric hook-up

Intake: After many months of rumors, Rimac Automobili and Bugatti have merged, and 33-year-old Mate Rimac will take control of the legendary French brand. The deal marks the birth of a new company, Bugatti Rimac, with the Croatian electric hypercar company owning 55 percent of the shares and Porsche taking the rest. Rimac Automobili is also split into two separate businesses, the hypercar-building firm and Rimac Technology, the latter under the umbrella of the Rimac Group. The Rimac Group, in turn, is owned by Mate Rimac who holds 37 percent of shares; Porsche holds 24 percent, Hyundai 12 percent, and other investors the remaining 27. Mate Rimac will run both Bugatti and Rimac Technology, and although clearly there will be much sharing of EV technology, Bugatti and Rimac Automobili will be run as separate firms, retaining their existing manufacturing bases in Molsheim, France; and Zagreb, Croatia.

Exhaust: While this is hardly a surprise given all the recent chatter, it cements Mate Rimac’s meteoric rise in a changing motor industry. Just ten years ago Rimac was a one-man shop in a Croatian garage; now, it’s arguably the world’s most advanced hypercar manufacturer, with a $237 million campus under construction and investment from Germany and South Korea’s big names. “This is a truly exciting moment in the short, yet rapidly expanding history of Rimac Automobili. We have gone through so much in such a short space of time, but this new venture takes things to a completely new level,” says a clearly excited Mate Rimac.

Intake: There’s no word on the G80 Sport’s powertrain, but from the first official photos, the Korean brand’s hotted-up 5 Series fighter is an attention-grabber. First impressions are dominated by two G80 Sport–exclusive options: Cavendish Red paint, and 20-inch wheels with a texture Genesis calls “G-Matrix Pattern.” We call it wickedly cool. The rear wheels will contribute to steering, too. Naturally, the interior will boast aesthetics unique to the Sport trim: a three-spoke wheel, and available (and legit) aluminum or carbon-fiber accents.

Exhaust: The distinguishing mark of the first-gen G80 Sport was its twin-turbo, 3.3-liter V-6 powerplant that made 365 hp. Spirited, sure, but not a true bruiser. Since a 375-hp, forced-induction six is now offered in the second-gen, non-Sport G80, the performance-oriented version will need to pack some serious heat.

Intake: The 2021 Australian Grand Prix in Melbourne and the MotoGP race at Philip Island have both been canceled due to “restrictions and logistical challenges” related to the COVID-19 pandemic. Australia has been held up as an example of how to contain the pandemic, with its strict border closures and rapid regional lockdowns, but the country has been slow to vaccinate its residents. MotoGP will hold a second race at Portimão, Portugal to make up for the loss of the Australian event, while Formula 1 still plans to hold 23 races in 2021.

Exhaust: Motorsports fans Down Under will be devastated. In 2020 F1 made it to Melbourne only to have the event canceled at the last minute after several team members tested positive for the virus. It was hoped that delaying the race until November of this year would be enough. 2022 and a return to normality can’t come soon enough.

Intake: Peugeot has finally revealed its entry for the WEC’s Le Mans Hypercar (LMH) class, the 9X8, destined to battle Glickenhaus, ByKolles, and Toyota in the 2022 season. (Ferrari, Porsche, and Audi are waiting until ’23.) Conspicuous in its absence is a giant wing; though FIA LMH regulations allow a single adjustable aerodynamic device, such as a rear wing, Peugeot chose to generate most of its downforce on an area of the car subject to less restrictive parameters: the underbelly, as Olivier Jansonnie, technical director of Peugeot’s FIA WEC effort, tells sportscar365. Beyond that, of course, it’s all trade secrets prior to competition.

Exhaust: We already knew the powertrain Peugeot would enter in the 2022 LMH series, which is open to hybrid and ICE-only setups: a 90-degree, 2.6-liter V-6 strapped with twin turbos, supplemented by a 200-kW electric motor and 900V battery, and married to a seven-speed sequential transmission. Total output is 670 hp, and how it actually puts down that power is rather complicated. We didn’t know, however, what said machine would look like—until now. 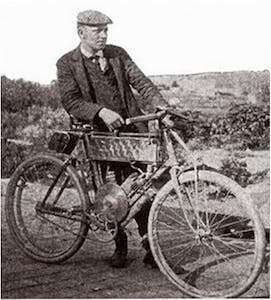 Intake: A motorcycle, not a car, completed the first North American transcontinental crossing in a motorized vehicle 118 years ago. On July 6, 1903, George Wyman arrived in New York City on his motorbike—51 days and 3800 miles after leaving San Francisco on May 16. Wyman’s 1902 “California” had a 200-cc, 1.5-hp four-stroke engine attached to an ordinary diamond-frame bicycle with 28 x 1.5-inch tires with wooden rims. A leather belt-drive with a spring-loaded idler pulley connected the engine output shaft to the rear wheel. The bike’s engine lost all power just outside of Albany, New York, so Wyman pedaled the final 150 miles to New York City. He still finished 20 days ahead of Dr. Horatio Nelson Jackson, the first person to cross the continent by automobile.

Exhaust: Once again, moxie—not technical advancement alone—proved to be a vital ingredient to complete a historic journey. Every successful explorer and inventor possesses unwavering determination, and we’re all better for it.

Intake: The Porsche Boxster has long been called the 911’s little brother, but over the last 25 years the droptop coupe has grown into a formidable challenger for the dollars (and the affections) of sports-car buyers. Jay Leno puts a first-gen car next to a brand-new model in the latest episode of Jay Leno’s Garage to highlight just how far the Boxster has come. Hint: There is nothing that hasn’t changed, and virtually all of those changes are for the better.

Exhaust: There was a time where the only folks enjoying Boxsters were those who were in the know. Now the secret is out, and the “little brother” Porsche is getting the love it deserves.

Get an insurance quote
A Story About
Share Leave comment
Read next Up next: This 1968 Eldorado ute is the cowboy Cadillac of our dreams