Long before Daytona-prototype Cadillacs competed on track and boosted Blackwings thundered onto showroom floors, the wreath and crest brand was synonymous with stylish, block-long cruisers sporting monster V-8s. The big-block era is long gone, of course, but Cadillac still knows its way around a torquey V-8. These days it’s simply a small-block supercharged to high heaven. The 2023 Escalade-V, the most powerful production vehicle in the brand’s 120-year history, seeks to be the ultimate Cadillac for the open road.

For our first time behind the wheel of this six-figure super-SUV, Cadillac invited us to Arizona and flung us the keys to several extended-wheelbase Escalade-V ESVs. Starting at $149,990 (including destination) the as-tested price for examples we drove was $152,490, each including the semi-autonomous SuperCruise option.

Cadillac’s flagship machine remains an imposing, body-on-frame three-row SUV, and even the ordinary Escalade is more refined than ever. While still sharing its chassis with GM’s other full-size SUVs, each successive generation of Escalade has carved out more and more of its own personality, with bespoke interior and exterior designs that distinguish it from the Tahoe or Yukon. The greatest departure here from its Chevrolet and GMC cousins is the Cadillac’s curved OLED screen that stretches from the center stack to the gauge cluster and beyond. The stunning display offers a highly customizable pixel canvas for the driver to view gauges, a map, or a forward-facing camera that doubles as night vision.

Of course, no infotainment screen could lure us to the desert outside of Phoenix on the cusp of summer. Cadillac’s siren song here comes from the unique beating heart of the Escalade-V: a version of GM’s LT4 V-8 that produces 682 hp at 6000 rpm and peak torque of 653 lb-ft at 4400 rpm. The engine is really a mixture of the 668-hp LT4 from the CT5-V Blackwing and the 755-hp LT5 from the C7 Corvette ZR1, so Cadillac engineers typically refer to it as either “LT4-plus” or “LT4.5”.

The Escalade’s engineers wanted their top-tier luxury hauler to truly earn its V-Series stripes. As such, the normal LT4 engine was never actually on the table; challenges involving both the intake and exhaust routing on the Escalade would throttle the ordinary engine’s output. Instead, Cadillac reached into the performance pushrod parts bin and cherry-picked the 2.65-liter supercharger and intake from the LT5 rather than the 1.7-liter supercharger used on other LT4 V-8s. The LT5 supercharger and manifold included a set of port fuel injectors to supplement the direct fuel injection found on every other V-8 in the LT family, but they weren’t needed in this application. Added airflow was what Escalade engineers were really after, as the packaging constraints of the Escalade engine bay put the intake path right behind the tall radiator; the extra draw from the larger supercharger was just what the Escalade-V needed. As a bonus, the LT5 supercharger manifold and lid include larger water-to-air charge coolers than the LT4—a welcome addition when the considering the Escalade’s gross vehicle weight rating and need to conquer steep grades. The radiator, still the same size as in other Escalades, gets a third fan for added airflow and cooling capacity.

Cadillac lavished the Escalade-V with equal attention on its exhaust. It all begins at the manifolds, which are cast from stainless steel and feature relief cuts in their heavy-duty flanges to withstand extreme conditions. (GM makes use of similar for the 6.6-liter gasoline V-8 in the Silverado and GMC ¾-ton and 1-ton pickups.) After leaving the manifolds, the exhaust travels aft through smooth bends, and the two banks meet at the passenger side. Escalade-V Lead Development Engineer Matthew Perelli told us that his team made sure that both banks of the exhaust were the same length prior to meeting up in an X-pipe, so that the exhaust would perform and sound as it should. To make up for the longer driver-side pipe that must cross over, the passenger-side pipe makes a 360-degree vertical loop. Besides doing the math and measuring twice, engineers went as far as filling each pipe up with water to triple-check that they held the same volume. After the X-pipe, the exhaust pipes goes their separate ways and get routed to the muffler, where each bank has its own within the active exhaust system. A Stealth mode allows the exhaust to flow through the “quiet side” of the muffler, whereas V-Mode opens up a more direct path that’s rumbly, authoritative, and exactly as thrilling as a performance V-8 should sound. These are, after all, the things V-series customers have come to love. 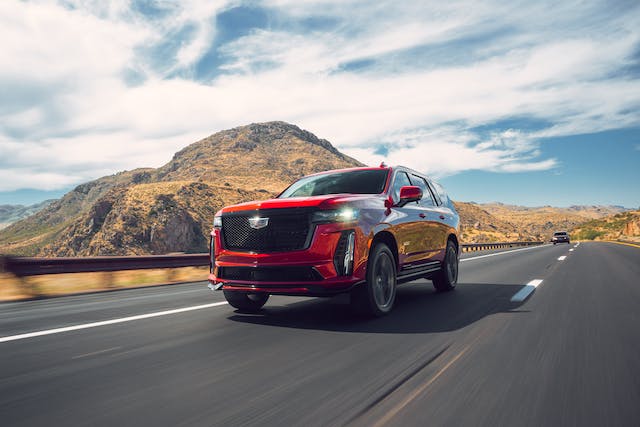 Nevertheless, the decision came down to fit the Escalade-V cabin with active sound cancellation, which does take a bit of the bite from the exhaust. When in V-Mode, the high-flowing exhaust burbles and pops on deceleration, and it does so with gusto. The staccato soundtrack will be enough to turn heads outside the vehicle, while the percussive pops from inside the cabin become smoothed off yet still noticeable. Just imagine speeding away from a pile of fireworks you yourself lit.

No doubt the suspension has a big job: managing the prodigious physics of driving a three-ton truck with nearly 700 horsepower. The added performance of the 682hp engine caused the normal Escalade to squat under hard acceleration. To get the front wheels to pull their weight, stiffer rear spring rates were employed on the air suspension to keep things level. The Escalade-V still uses the same diameter sway bars, however, avoiding a harsh ride, and the fourth-generation Magnetic Ride Control features dampers tuned specifically for the new performance of the Escalade-V. The difference between Tour and V-Mode is more subtle when it comes to the suspension, as even V-mode offers a comfortable ride, it’s just a bit more firm and connected. Cadillac didn’t try to build a Blackwing and knew this brute isn’t going to see any hot laps, so it’s decidedly biased for the street and highway. That’s not a bad thing.

Considering its position at the top of the Escalade product ladder, each Escalade-V comes fully loaded with the Platinum interior complete with zebrawood accents on the console and dash as well as an impressive AKG Studio Reference 36-speaker audio system. Compared to some of the better luxury car audio systems we’ve experienced, the AKG sound system didn’t completely blow us away, although we must admit that it really shines when the volume gets turned up. Speakers placed all around the cabin and in the headrests work together subtly and the sound stage it created had us feeling like we were facing the band. The high end in particular was quite crisp, especially after we dialed up the treble just a bit. Combined with the Escalade’s total lack of wind noise and fantastic sound damping and you can easily tune out the LT4, although we’re not sure why you’d want to.

EPA fuel economy numbers are still pending, but in the Arizona heat with air conditioning blasting, the best fuel economy we saw was just under 15mpg with most of that being hilly highways. Perhaps careful highway driving could squeeze a bit more out of the big, supercharged V-8. We’d expect similar numbers from the EPA though, as any highway improvement will be tempered with their mix of city driving that’s sure to be under 15 mpg.

The Escalade-V might seem out of place if measured against previous V-series models, as Cadillac’s Blackwing moniker has yet to truly establish itself as far as name recognition goes and the mid-range V-Series still conjures up images of the tack-sharp CTS-V that truly shined on the track. Yet in the current lineup, this new V-Series does make sense as a sportier flagship SUV and Cadillac will likely have more than enough willing buyers to provide a return on the investment in the new suspension and powertrain. This may be the most powerful internal combustion engine Cadillac we ever see, and it’s surely the last new Cadillac that doesn’t rely on electricity for at least part of its propulsion. In that regard, it’s very fitting that the brand known for massive, powerful, luxurious cruisers makes the most powerful full-size SUV with a raucous pushrod V-8 heart. That’s about as Cadillac as it gets.

Highs: Powerful and brash, with a fantastic soundtrack, yet perfectly suited for long-distance cruising thanks to dialed-in suspension.

Lows: Flagship power and luxury comes with flagship price tag. May be hard to get if production is limited.

Summary: Despite a well-earned racing pedigree and Blackwings that invite comparisons with the spiciest German sport sedans, a comfortable, high-performance cruiser is still a part of Cadillac’s heritage and the Escalade-V is a fitting successor.

Get an insurance quote
A Story About
Share Leave comment
Read next Up next: The Very Annoying Rental Car