It’s Saint Patrick’s Day, a holiday well known for the wearin’ o’ the green and tipping back a pint of Irish stout. Saint Patrick, however, has a reputation for driving all of the snakes off the Emerald Isle. Naturally, his favorite motorsports personalities would also be famous snake drivers, right? Just bear with us for a second on this one …

In 1950, Farina piloted an Alfa Romeo to the first FIA World Championship of Drivers, over his teammate Juan Manual Fangio. The emblem on the front of Farina’s Alfa Romeo featured the same twisted green serpent that is on the emblem today. Hence, uh, Farina is a snake driver. 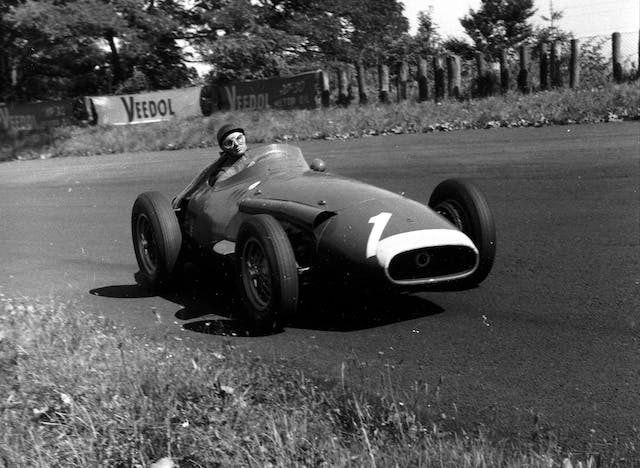 The five-time Formula 1 World Champion took his first series win piloting an Alfa Romeo in 1951 before winning championships with Maserati, then Mercedes, then Ferrari, and a final one after switching back to Maserati for the 1957 season (shown above).

The Crazy Swede, Samuel Hübinette, showed the Formula Drift field how it’s done in its inaugural season, winning the championship in 2004 and again in 2006, both times behind the wheel of a Dodge Viper. It almost seems unfair to combine the Viper’s brutal V-10 power with a driver that was geographically predisposed to do the Scandinavian Flick.

The Viper is arguably the best-looking car Dodge has ever built, and the last-generation version is an absolute stunner in street trim—even more so when it’s kitted up for the track. Kumo Wittmer drove one at the 2013 24 Hours of Le Mans with co-drivers Tommy Kendall and Jonathan Bomarito, where they finished 9th in class. The following year, Wittmer campaigned an SRT Viper GTS-R to a series win in the WeatherTech SportsCar Championship (it’s the one pictured at the top of this article).

The field of the 1968 NHRA Winternationals in Pomona, California, was heavily stocked with 428 Cobra Jet power, but when the smoke cleared in the Super Stock Eliminator class, only Al Joniec and his fastback 1968 Mustang Cobra Jet were left.

After proving his mettle in various Shelby Cobras, Bondurant got behind the wheel of a gorgeous Daytona Cobra Coupe with F1 veteran Dan Gurney. The two took the GT class win at the 1964 24 hours of Le Mans, where the coupe’s streamlined body helped add speed on the long straightaways.

As the chief test driver for Shelby American, Ken Miles was responsible for making the short-wheelbase V-8 roadsters into track-taming road course machines before working on the Daytona Cobra and GT40. His driving prowess was probably best exemplified at the 1966 24 Hours of Le Mans, where the staging of the 1-2-3 Ford GT40 finish ultimately cost him the win for the sake of a memorable bit of publicity for Ford.

Who else could possibly be the top snake driver than “Snake” himself? After a solid career as a crewman and driver in the ’60s, Prudhomme and friend/rival Tom McEwen grew drag racing into mainstream popularity in the ’70s through brilliant marketing. Snake went on to win four straight NHRA Funny Car championships from 1975–1978 and, despite retiring from professional driving, can still be found in NHRA pits on race day.