I tested my safety gear in the most fun way possible

Motorcycle safety on the track is a little different than in the car world. Specifically, it involves more dead animals. Cars require a lot of fabrication, while us motorcycle guys are just trying to accurately measure ourselves and fit into standard sizing charts in the hopes that we never have to actually test the fit. Even in the best case, all the gear required to go track riding feels like a very heavy, oddly fitting supersuit. I was nervous about how my gear would work when I hit the big tracks on the XR250R, so I did what any rational person would do: scaled everything down.

The cost of racing is no joke. I could go to a big track and spend $1000 for the weekend just to find out in the first session that my boots are wildly uncomfortable on the bike, or that my suit binds. So instead of buying a grand of track time, I bought a grand worth of motorcycle.

That’s right, to save money at the track I spent money acquiring a new (to me) motorcycle. I know you are skeptical. The thought process here is sound. I promise. Not even just in the, “I swear I needed this new tool to finish the project, honey” kind of way.

Safety gear fit is a highly personal thing, and it matters a lot in a sport where something going wrong with the machine leads to sliding on pavement. Pavement is not nice to human skin. Impacts are not nice to human bones. Motorcycle crashes are typically a series of impacts connected by sliding. See the importance now? That’s why when I started this project I called up Alpinestars to talk about what I needed. It boiled down to four items: leathers, boots, gloves, and back protector.

There are two schools of thought on the looks of a person in one-piece leathers: badass, or a wanna be Gundam fighter. The team at Alpinestars shipped me its mid-priced Missile suit that is full of nice features. A zip-in liner that can easily be washed after a hot day on the bike is really a luxury, and so is all the integrated armor that gives me a chance at walking away unscathed should I take a slide. The fit of one-piece leathers is always tough and it’s always recommended that you buy somewhere you can try them on first. That’s wasn’t an option here in Northern Michigan, so the Alpinstars team did their best guess at sizing based on me describing myself over the phone. With my history as a cross country and track runner, I am long and lean which makes sizing almost as bad as those who do more 12oz curls than real weight lifting.

The Missile suit I ended up in is size 52 and fits surprisingly nicely. After my fiancee finally got done laughing at the process it took me to put it on for the first time, I realize just how specific the fit of leathers is. Walking around is to be avoided, but once in the riding position the panels and pucks were no longer awkward. This surprised me considering the suit was clearly made for a more hunched-over, sportbike-style riding position rather than the upright elbows-out posture I take on the supermoto.

Human ankles are amazing things, but their durability to odd impacts is a weak spot, hence why riding boots are something I have fallen in love with again and again. Even budget-conscious motorcycle-specific boots will fare better in a crash than the nicest moc-toe workboots. I’ve owned a few different styles of full-height street boots over the years and now opt to spend the money on nice ones. The Super Tech R boots have all the safety but also all the venting, something that makes a hot day at the track much more tolerable.

Pretty simple here. Leather with some strategic aramid fiber reinforcement. The Supertech gloves fit better out of the box than any other moto gloves I’ve purchased, and that was a good thing because after hours of use they really haven’t changed or “broken in” much at all. The gauntlet cuff prevents any gap between the glove and jacket sleeve which keeps delicate wrists separated from flying debris and also helps to make pulling them on a bit easier. While for most riders gauntlet vs short cuff gloves will come down to personal preference, once you take to the track, most organizing bodies require gauntlets to be worn.

This is the fun one. Motorcycle safety seems to be constantly evolving and there have been sizeable leaps and bounds in the last few years. Back protectors are typically a hard plastic piece that prevents certain flex of the spine. They are held in place by shoulder straps and a waist strap. One higher level of protection is the Tech Air 5. There is the typical back protector, but inside that back protector is a computer, sensors, and an inflation system that can turn the t-shirt shaped garment into an airbag in as little as 20 milliseconds. Watch one motorcycle highside crash video and you will see why this technology is so welcome for racers.

It’s not cheap, but almost no safety items are, and when it comes down to it, what is your safety worth? I don’t buy cheap helmets for a reason. With any luck this vest turns out to be nothing more than a security blanket hiding under my leathers. At worst it will puff me up like the Stay-Puft Marshmallow Man to keep my internals from being shaken and broken.

How all these pieces would work together remained a question. Did the suit actually fit and work for me, not against me? I really didn’t want to learn about how the cut of the suit might restrict a small amount of movement as I approached turn 11 at Gingerman Raceway wide open in sixth gear. That’s not the time to feel uncomfortable. Approaching turn 7 of a go-kart track at 35mph sounds a lot better place to learn. That’s why I picked up a Honda XR100 to build a miniature version of the XR250R I am using for the Six Ways to Sunday project.

The concept is simple. The XR100 is literally the XR250 just scaled down. I laced up a set of 16-inch rims and put on some sticky street tires, added a catch can and some safety wire then dropped down to East Lansing Kart Track for an open practice day. This allowed me to ride all day for just $50, a perfect price and place for learning.

Suiting up upon arrival let me know the first annoyance: fitting the Tech Air 5 underneath my one-piece leathers required outside assistance. Luckily my pit neighbor was so kind as to lend a helping hand. From there I rolled out onto track between kart practice sessions and got a feel for what it was like to take a tire warmup lap, learn the track, and get up to speed. The process was a little intimidating, and I was so happy to be doing it at a small, relatively low-speed track. I know this will help when I go to a big track.

Breaking in the gear was as simple as running as many laps as possible. I got lucky in that everything fits exactly as I predicted and there were no unusual rubs, chafing, or binding. I could move unencumbered through all the movements that I needed to be able to make while on track. That is enough to label this experiment a success. It also gave me a great reason to buy another motorcycle. You know, win/win. 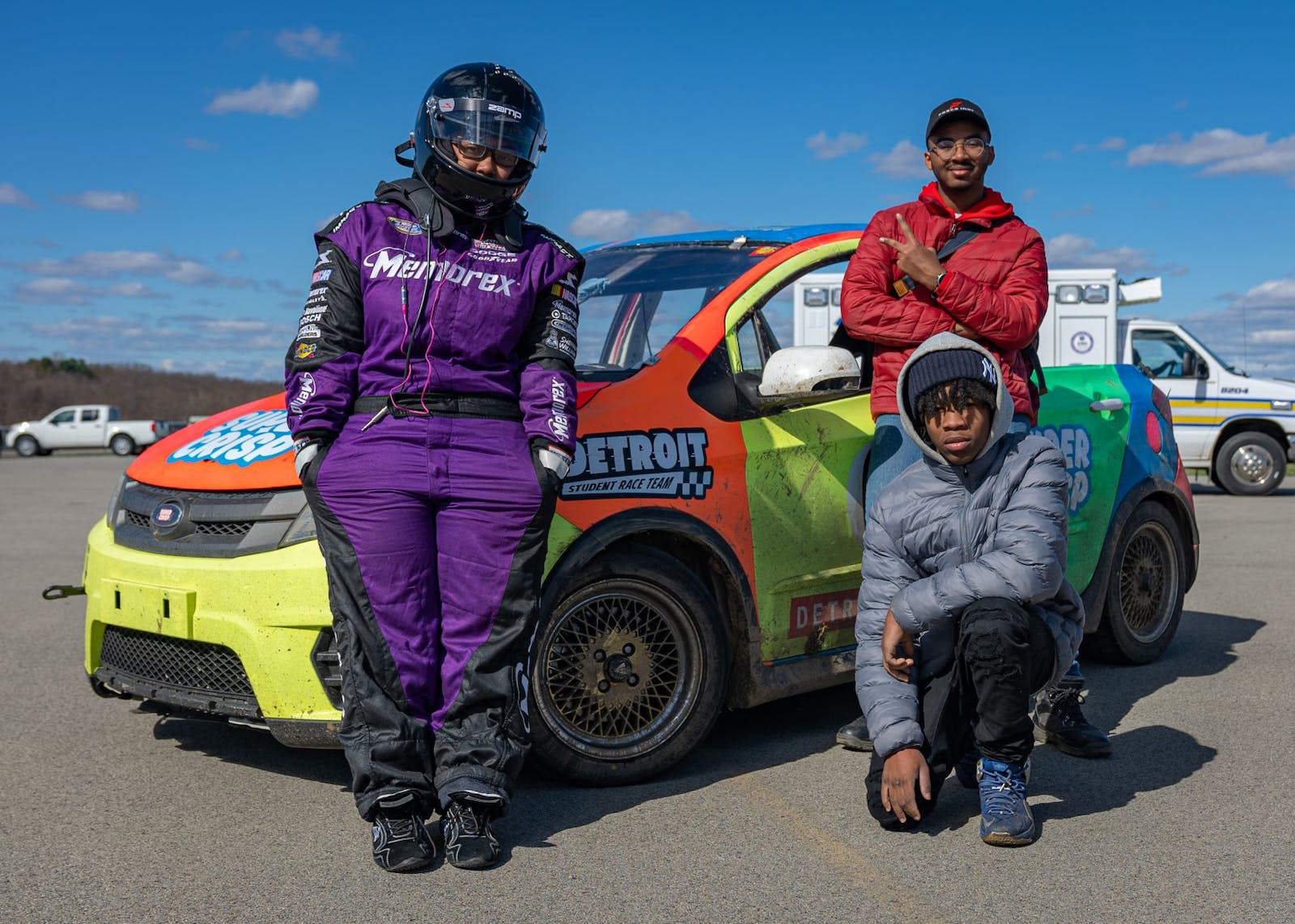 Get an insurance quote
A Story About
Share Leave comment
Read next Up next: This Rockne isn’t quite as famous as the Notre Dame football legend

Just wait till you try a 65cc two stoke or 150r on a kart track! Also the XR100 has a huge spec class racing group in Ohio. Also your XR250 is going to suck on a full road corse, they just do not have the power or RPMs to not just be in the way. Even a DRZ400SM sucked on the full sized tracks. There is a group of guys that run supermoto at Autocity in Flint or at Jackson Kart track that would suit your XR250 more. But if you insist Gringerman over Grattan due to the crazy long straight at Grattan. Ps I have a Sv650 you could pick up for about the same price as the XR100 that would work much better on the big tracks.