The motorcycle world embraces a far more diverse range of engine layouts than the automotive world does. A bike’s packaging is more flexible, and its demands for cooling and heat management are lax compared to even a basic car. Just how wild you can get in the two-wheeled kingdom? Take a look at this JRL Cycles Lucky 7 and its radial powerplant.

Yeah, radial—not rotary. Comprising seven cylinders and displacing a whopping 170 cubic inches, the Rotec Aerosport R2800 is the literal centerpiece of this custom bike. The R2800 is transplanted from the light-aircraft world and was originally intended to fit into the front of replica WWI planes and other vintage designs such as home-built biplanes. Those aircraft roots explain the redundant ignitions on the right-hand side of the bike.

This particular radial engine boasts classic aviation looks without the typical hassle; for example, the R2800 features an electric start system in place of a prop-start configuration. That start system might be one reason why JRL picked this engine around which to build a motorcycle—because, let’s be honest, the engine is so massive that the rest of the bike has to be engineered to fit around it.

The rest of the chassis is full-on chopper, with what looks like a 30-inch diameter front wheel and a rear tire wide enough to use as a home desk. The seat doesn’t look that comfortable, but rear-end discomfort won’t be keeping this bike off the road. Gas consumption is rated at 5.8 gallons per hour at 75 percent throttle when bolted to an aircraft; with the bike’s tiny gas tank and comparatively inefficient power usage, this bike might be lucky to get from the trailer to the photoshoot location without needing a refueling stop. That doesn’t kill the value, though.

“Despite the absurdity, unique motorcycles like this tend to do well at auction,” says James Hewitt, Hagerty information analyst and lover of all things crazy. “All it takes is two buyers wanting something unique, and the sky is the limit—especially when an interested party with deep pockets couldn’t have another built even if they tried. It is an interesting conversation piece that stands out where a classic bike might not. Where else are you going to find another?”

Well, there were two others built by JRL, but that doesn’t mean they will be any easier to get your hands on. If seven pistons shoving one crankshaft powering one wheel is your type of crazy, you had better get registered for Mecum’s Las Vegas sale so you can ride this beast home. 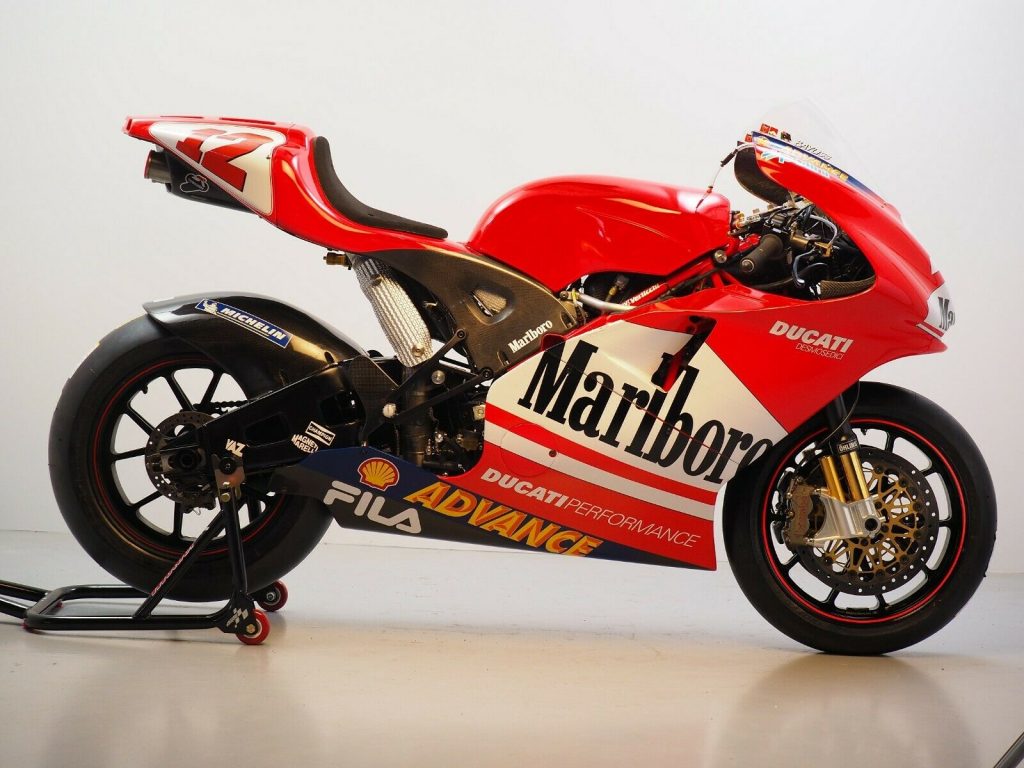 Motorcycles Italian unobtanium: This Ducati GP3 could be yours
Kyle Smith