The sun doesn’t shine much in northern Michigan during January and February. While winter reigns, two groups emerge: those who embrace the cold, and those who curl up inside, cocooned in down, wool, and their own misery awaiting the first signs of spring. I have floated between the two camps in my nine years living in Michigan, but after one weekend of ice racing, I’ll plant my flag firmly in camp number one.

This trip only happened thanks to a bit of luck. Sourcing the special, studded tires required to take the flag on frozen water was not nearly as simple as I expected, and ice racing is also heavily condition-dependent. It all finally came together last week, however, so I loaded up the big red van and headed two hours south from Traverse City to the Valley Trail Riders motorcycle club grounds in Bentley, Michigan, for a Sunday of fast left turns.

The track was not scraped from a lake or pond, as you might expect. Instead, it was a flooded flat-track oval. As I rolled the van through the gate and headed for registration, a small fleet of ATVs equipped with plows circled the track, clearing the dusting of snow that had fallen overnight and scraping the surface as smooth and flat as possible. I quickly realized that my success would depend on convincing my brain to get comfortable on a surface that, since I first learned to walk, I had filed under “treacherous.”

After registration it was time to unload the bike and get prepped for practice. I rolled the XR out of the Chevy and onto a stand to carefully remove the tire covers. With the screws exposed, a quick visual inspection was all that was needed before kicking the engine over to run it for a bit and get some heat in the oil. After standing around for a minute supervising the bike, I discovered something else that needed warming up—me.

Comfort off the bike was a luxury I never really considered until the weekend on the ice, where it quickly became apparent that I’d need a plan. For race-worthy ice, you want an overcast day with temperatures a good 10 to 15 degrees below freezing. Keeping comfortable and relaxed under such conditions was, unsurprisingly, a bit tougher than it was on warm summer days with my supermoto setup. The arctic conditions also made it difficult to keep the engine safe from damage. For my personal comfort I fired up a small generator and plugged in a space heater to keep the cabin of my beloved Express van toasty warm. The XR250 got the thoroughbred treatment: regular trots about the pits, and a moving blanket to retain heat in between runs on the oval.

Success on this unusual track boiled down to two things: Form, and trust in tires. The mental hurdle of being on glare ice needed to melt from my brain quickly, and the first time I tipped the bike into a corner during morning practice, I knew my expectations would need an immediate re-set. The traction was mind-blowing. On the starting line, I discovered I could drop the clutch on glare ice and bike would launch harder it did on most sandy trails in northern Michigan. So odd. All that traction meant tons of control—but I had to handle it correctly.

Practice rolled along quickly. The groupings were simple: Big bikes, small bikes (for the kids), and ATVs. The race classes were more finely delineated, but track surface was precious, which explained why each practice “session” lasted only two laps. Then the corner workers flagged you out the track exit, past the ambulance, and into the parking lot. It took a minute to come down from the adrenaline that shot through my system when I saw the first green flag and experienced my first corner with all the timidness of a fawn. After my pulse settled, I resorted to hot-lap practice sessions by cutting right back across the parking lot and joining whatever group was swinging back out onto the track.

Those laps were a game of go-fast trial and error. I focused on changing just one thing going into each corner, quickly centering on the form hammered into me during my time at American Supercamp. The body position that worked best was the same as flat-track: Left arm straight, right elbow pointed at the sky. Push down on the bike with the inside of right thigh, place butt all the way on the right edge of the seat, hang left leg off side of bike to evaluate lean angle. Once I could consistently set my body position correctly, it became easier to fine-tune details: Getting to the race itself, driving later into the corners while getting on the throttle earlier. Fear began to yield to excitement just as practice ended, and I headed back to the van for an internal debrief: What felt like I was doing the right thing? How was I positioned on the bike compared to the faster rider in front of me? 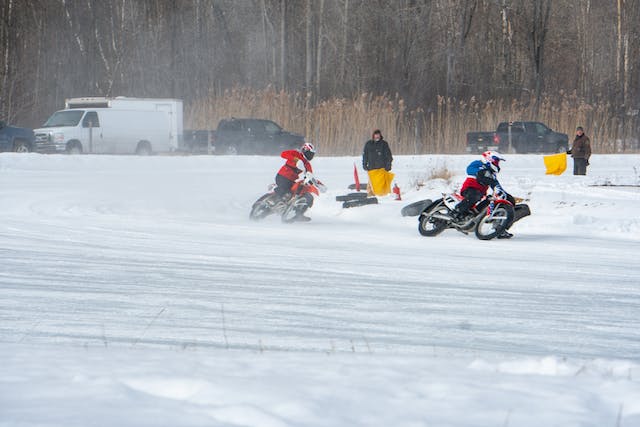 As in the heat race, I was off the back of the pack by turn three of the six-lap main race, but this time a rider was within striking distance. I worked to close the gap to the fellow Honda rider, and made progress for a bit. Then the leaders came through. Suddenly, I was a lap down. It spooked me more than I care to admit, putting me off-line and into the ice chips and accumulated snow that lurked off the faster line. Not unrecoverable, but in an instant I was a handful of bike lengths down on my target.

Rolling over the finish line with the checkered flag waving prompted a flood of relief. I assumed I was in last place—there seemed no reason for me not to be—but in fact I had finished seventh out of the 13 who started. Surely that success was due mainly to the fact that I rode safely enough to stay on the XR, and did not find myself pinwheeling across the ice, independent of the bike, like a few of the riders did—but I’ll take it.

The whole day was a whirlwind. No amount of persuasion could have sold me on ice racing without actually going out and doing it, but now I literally cannot wait to do it again. The mental gymnastics required to point a motorcycle at glare ice while holding the throttle wide open in fourth gear were fascinating. The whole time on the ice was a stream of near-instant feedback. If I did it right, the bike wanted me to pour on the throttle. Get it wrong, and I was instantly warned by a shake of the handlebars or a slide from the rear tire. Everything in my head said this should be terrifying and dangerous—yet somehow ice racing felt like the safest time on track of this whole Six Ways to Sunday project. (Trials weren’t technically held on a track.)

With the bike loaded back in the van and headed north, it was time to celebrate a bit. I had crossed off the sixth discipline within 12 months. Both the XR and I survived—though the bike needed an engine rebuild mid-way—and lived to ride another day. Will I be returning to all of these tracks and trials during 2022? Maybe. A final wrap-up and thoughts on this project are coming soon. Stay tuned.

Get an insurance quote
A Story About
Leave comment
Read next Up next: Avoidable Contact #137: The low revs of high-stroke misery motors