Insider Insight: Smaller was better for the January Auctions

Casual watchers of the collector car market would be forgiven for believing the January Auctions, typically the biggest of the year, were called off entirely. The best-known Scottsdale auction house, Barrett-Jackson, postponed its sale until March due to COVID. The big crowds and packed tents we associate with Scottsdale auctions were notably absent.

However, several sales pressed on. In Arizona, Bonhams, Gooding & Company, and RM Sotheby’s, all known for offering high-end collectible cars, went on with auctions that relied heavily (in Gooding’s case exclusively) on online participation. Worldwide livestreamed a “Scottsdale” sale from its Auburn, Indiana, headquarters.

Earlier in the month, Mecum Auctions held a large in-person sale in Kissimmee, Florida, with mandatory mask wearing for those present and online bidding for those who preferred to watch remotely. A follow-up Mecum sale last weekend focused on the collection of Muscle Car City, a museum in Punta Gorda, Florida.

The 2021 version of the January auctions was no surprise much smaller than what we’re used to—22 percent fewer cars for sale, even without counting Barrett-Jackson—yet they performed much better: a higher percentage of cars sold, and average selling price jumped 10.2 percent.

This was particularly true for muscle cars (here defined as those built from 1963 to 1973), which are traditionally stars at big auctions. Just over 500 muscle cars were auctioned this month, down from more than 1000 last year. Average price increased from $78,000 last year to over $103,000 this year. Translation: Demand for classic muscle vastly outstrips supply. At Mecum’s Muscle Car City auction, the 26 cars that sold at past auctions returned 84 percent over an average term of 12 years, which shows they continue to be a good investment over the long-term.

In recent years, the market has been overcrowded with sellers and auctions, resulting in lower sell-through rates and prices. The turbulence of 2020 seems to have flipped that upside down: Buyers seeking a pandemic-proof pastime outnumber sellers. Whether this is sustainable, and what happens at Barrett-Jackson in March, remains to be seen. What is certain, though—and what may be fueling the surge here—is that the instability in the world won’t affect the horsepower or driving dynamics of a classic car.

For a detailed and data-filled analysis of the 2021 January Auctions, check out the full story over at Hagerty Insider. 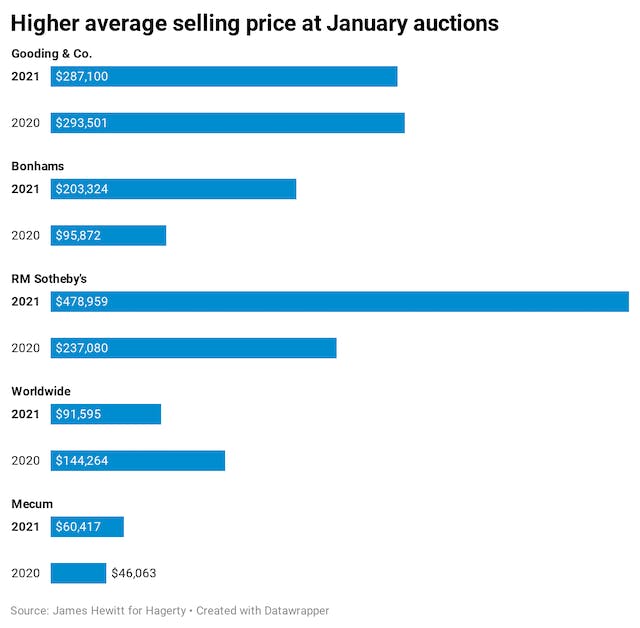