The first Oldsmobile Toronado, full of front-drive muscle, was never chained to convention

It’s a chain that makes the Oldsmobile Toronado go. Two inches thick with multiple links, it rides on sprockets inside a carrier bolted to its three-speed Turbo-Hydramatic transmission, which is turned 180 degrees. Splash-lubricated, this mother of all chains transfers the drive from the torque converter to the transmission’s planetary gear sets, getting the power of the Toronado’s 425-cubic-inch V-8 to its front wheels through an offset differential and equal-length driveshafts. Long, smoky front-wheel burnouts follow.

The 385-hp 1966 Toronado was America’s first front-driver since the 1930s, though GM had been playing with the idea for more than a decade. “The Toronado venture was born of a desire to create a better automobile, one with more usable room and roadability,” Olds chief engineer John B. Beltz told Motor Trend in December 1965. “We were after a big step forward and we were willing to break new ground in order to get it.” 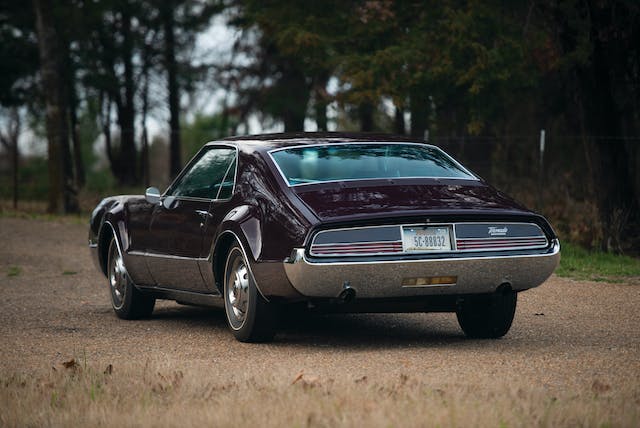 Chief interior designer Ed Donaldson and his team came up with a cabin equally as radical, with rocker switches, a drum speedometer, and an elaborate instrument cluster he called a “driver podium.” A column shifter and bench seat were standard even in the more trimmed-out Deluxe model, taking advantage of the additional interior space.

GM’s first unitized structure made the Toronado roughly twice as stiff as an Olds 98, according to Car and Driver. Other innovations included two additional rear shocks mounted horizontally to quell the windup under braking of its beam axle and single leaf springs. The front suspension got extra-beefy A-arms, and the Toronado was GM’s first production car with torsion bars. The 4500-pound coupe got finned 11-inch cast-iron drum brakes. Front discs became optional in 1967.

Getting the Toronado’s 475 lb-ft of torque to the ground was challenging without a limited-slip differential, despite having 60 percent of its weight up front. Car and Driver ran 0–60 mph in a modest 8.6 seconds, but the editors were blown away by the Oldsmobile’s refinement and handling, saying it would corner faster than any American car of similar size. Motor Trend named it Car of the Year, and Olds sold about 41,000 in ’66. 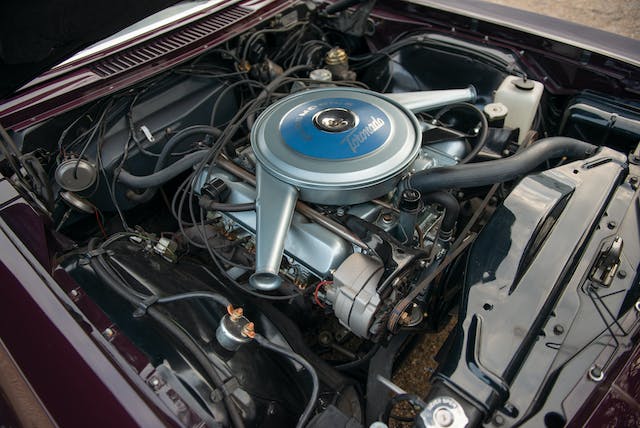 Sales plummeted nearly 50 percent in 1967, however, just as Cadillac grabbed the blueprints and introduced the front-wheel-drive Eldorado. The following year brought chunky bumpers along with 455 cubic inches. The new engine made 375 horsepower and over 500 lb-ft of torque, or 400 horsepower with the W-34 option Olds offered through 1970. In that final year, the Toro lost its hidden headlights and the arch of its wheel wells, which became squared off.

The first-generation Toronado was a milestone machine, but with little to no growth over the past five years, you might say values have been chained to a post. That won’t last forever.