Since 1905, in the rolling hills of Worcestershire, Shelsley Walsh has played host to the great and good of motorsport, making it—drum roll, please—the oldest motorsport event still held on its original course. And Hagerty UK will be holding a hillclimb of its own on this historic course, on May 28.

Those that have visited will tell others that Shelsley Walsh is a reminder of simpler times, as far removed from a modern Grand Prix venue as it is possible to imagine. It’s also a demanding course to drive, with little room for error along its 1000-yard (910-meter) run and its 14 percent incline. This makes it a wonderful venue to see drivers pushing a car hard as they chase a quick time up the hill, but not so hard that they become uncomfortably acquainted with the banks surrounding the course. It’s a fine line.

And what a selection of cars there will be …

Among the entries which will be driven in anger up the hill are some significant cars with motorsport pedigree to spare. Alfa Romeo, Aston Martin, Bentley, Jaguar, Lancia, Toyota, and more will be represented. Here are just some of the star cars tackling Shelsley Walsh, and if you’d like to see them run, or even drive the course yourself, follow this link to find out more.

1922 Bentley 3-Litre: The car that put Bentley on the motorsport map 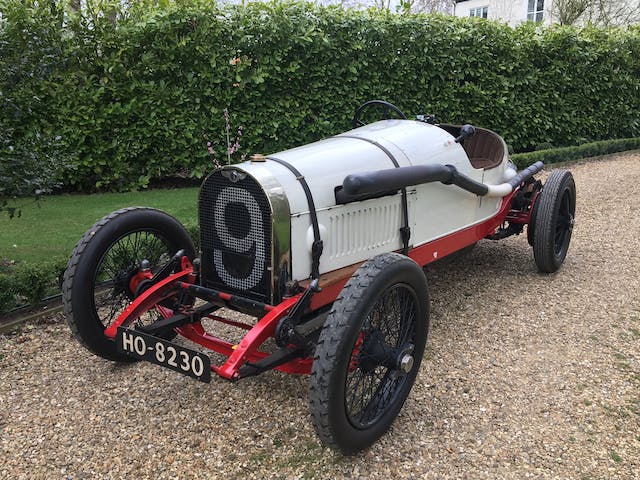 It was almost a century ago that Walter Owen Bentley, Frank Clement, and Douglas Hawkes were making the final preparations to their Bentley 3-Litre to take part in the RAC Tourist Trophy, on the Isle of Man, for the first time. It wasn’t just the first TT for Bentley but also its first motor race—and it wasn’t going to be a walk in the park. Bentley would have its work cut out, facing the more experienced teams of Sunbeam and Vauxhall, but W.O. knew that success at the race would help sell the new 3-Litre model, his vision of the perfect sporting car from a British manufacturer.

A win was to prove elusive but second place, for Clement, and fourth and fifth for W.O. and Hawkes, respectively, put the marque on the map. The four-cylinder engine, which featured four valves and two spark plugs per cylinder, had proven itself, and the 3-Litre in all its guises went on to be a success for Bentley. A rare opportunity to watch one of those original, 1922 works cars run, and have a really good look around it in the paddock, this is a must-see car for petrolheads of all persuasions.

1933 Lancia Dilambda 232: Remarkable survivor with a story to tell

Vincenzo Lancia, previously Fiat’s chief test driver, founded his own company in 1906. He promptly set about making a name for himself as an independent thinker who would bring innovation to the road. By the end of the ’20s, the Dilambda had arrived, with a new separate chassis in place of previous load-bearing bodies, independent sliding-pillar front suspension and a narrow-angle V-8 engine.

This 1933 example is a one-off and highly original sports racing car. It raced in period in what was then the Italian colony of Eritrea, East Africa. It has a sports body and the chassis was shortened by 26 inches to match the Alfa Romeo 6Cs it raced against, and over the years it would take part in events including the 1937 Coppa del Governatore dell’Eritrea, a 26-km (16-mile) hillclimb from Nefasit to Asmara, and the 1938 Coppa di Natale.

After the War, an American serviceman brought it back to the U.S., where it remained until 2020. The matching-numbers machine is said to be in remarkably original condition—you can still see the imprints of the hammer head inside the rear clamshell, from when it was first fashioned—and it is a beautiful sight to see running. Well worth a close-up inspection. 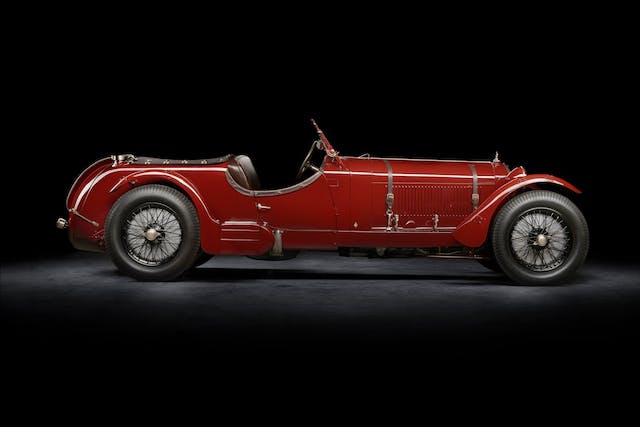 Where to start with the 8C? Unveiled in 1931, this is the car that continued Alfa Romeo’s motorsport success with such force that you can imagine the opposition sighing and shrugging their shoulders when the 8Cs arrived at any race. Its straight-eight, supercharged 2.3-liter engine, the work of Vittorio Jano, powered the 8C to wins at the Targa Florio, Italian Grand Prix, Mille Miglia, before Prospero Gianferrari, head of Alfa Romeo, set his sights on the toughest race of them all: Le Mans.

To satisfy the rules of the French 24-hour race, a longer-wheelbase and four-seat body had to be drawn up, resulting in the 8C 2300 Le Mans, of which nine were built. In 1931, three cars were entered for Le Mans but it was the car driven by Lord Earl Howe and Sir Henry Birkin who emerged victorious and then some, crossing the line with a lead of 112 km (70 miles). For the next three years, Le Mans belonged to Alfa Romeo. 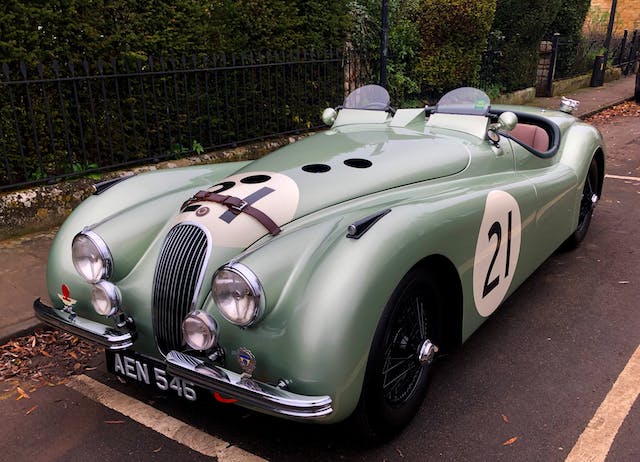 Significant for its history as much as its beauty, this 1951 XK120 (“AEN 546”) might have been a privateer entry for the 1951 Le Mans 24 hours, but was prepared by the Jaguar factory for the legendary French enduro and given the starting number 21 in sequence with the Works C-Types. At the race it became the first ever XK120 to run on wire wheels and was equipped with many unique factory features, including a Le Mans fuel filler and C-Type cylinder head.

Such is its standing in the Jaguar community that it has become something of a blueprint, and many XK120s have been modified to follow ever since. Another distinguishing feature on this car is the trio of access holes neatly cut out of the bonnet, assisting this car’s swift and efficient running. Only five XK120s ever raced at Le Mans and of them, this is the highest placed of all, with Rob Lawrie and Ivan Waller taking 11th overall (6th in class) at an average speed that would have been enough to win the event outright just two years earlier.

1952 Jaguar C-Type: The first car with disc brakes to win a race 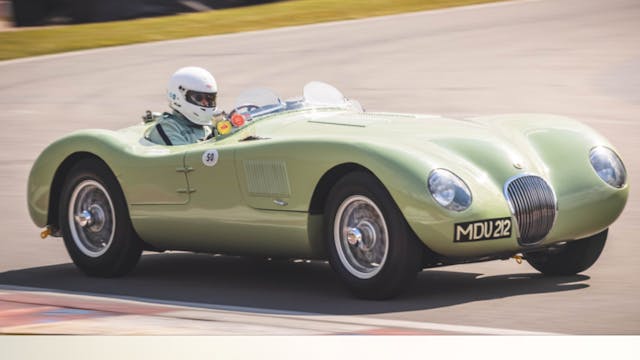 Motorsport enthusiasts and Jaguar fans alike are probably aware that the C-Type was the first car to win a motor race using disc brakes, but how many will know that chassis XKC005 is that very car which took the checker flag at Reims, north-east of Paris, in 1952, driven by no less than Stirling Moss?

Yet C-Types were clocking up wins for Jaguar before that. In 1951, and at its first attempt, chassis XKC003 driven by Peter Whitehead and Peter Walker took the finishing flag at Le Mans with a 77-mile lead. It had been developed from the XK120, using a lightweight tubular frame devised by William Heynes and the slippery body was the work of Malcolm Sayer, while those new-fangled disc brakes—fitted later to the ’52 Moss car—were developed with Dunlop. A further victory at Le Mans in ’53 cemented the C-Type’s standing as one of the all-time greats.

As for chassis XKC005, it also counts the ’52 Monaco Grand Prix and ’53 Mille Miglia to its name, with many more national wins besides. 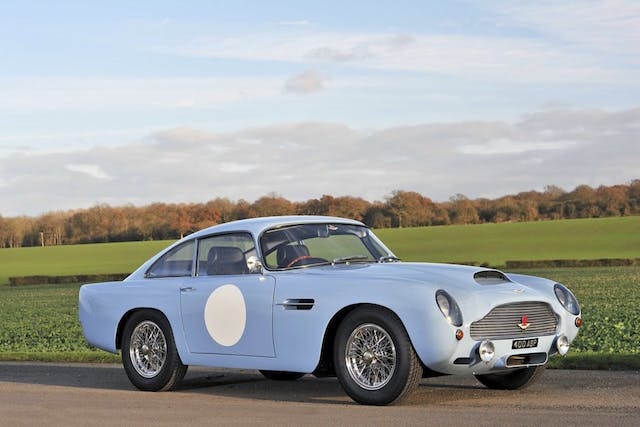 The romantic idea of driving a car to a motor race, competing with it, and then driving it home again may seem like a farfetched dream today, but with the DB4GT that dream was very much a reality. It was shorter, lighter, arguably prettier, but crucially faster than the standard DB4 and it was a winner right out of the box. In its inaugural 1959 season at the Bahamas Speed Week, after another driver rolled Stirling Moss’ factory-prepared DBR2, Aston Martin borrowed a customer’s newly delivered DB4GT from the car park and gave it Stirling Moss to race. Moss duly won.

This particular car is one of the original 75 DB4GTs built, further distinguished by being one of the 45 right-hand drive examples and is thought to be the only example delivered in the gorgeous color of Wedgewood Blue. It has been in the U.K. from new and once formed part of the stable of the Hon. Patrick Lindsay, who counted the Napier Railton, ERA R5B “Remus”, ex-John Cobb Alfa Romeo 8C Monza and a Supermarine Spitfire among his many other impeccable means of transport. 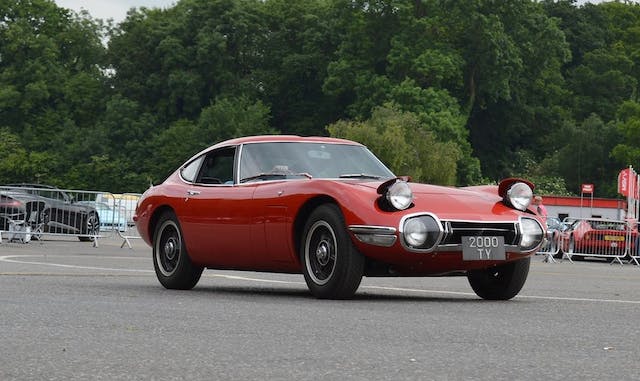 Dismiss this as James Bond’s Japanese rental at your peril. The 2000GT has become one of the most sought-after collector cars of the moment; in March one tuned by Carroll Shelby set a record as the most valuable Japanese car sold at auction.

Heralded as Japan’s first supercar, it was powered by a 2.0-liter double-overhead-cam straight-six engine which delivered 150 hp to the rear wheels, while the suspension was all-independent and those wheels were fashioned from magnesium alloy—a first for a Japanese production car. Just 351 examples of the 2000GT were made. This one was fully restored in 2013–14.

The first 2000GT prototype was presented in 1965, built by Yamaha Motor Co and thus providing a little-known link to today’s equally desirable Lexus LFA, as its acclaimed 4.8-liter V-10 engine was also built by Yamaha.

Just 52 Zagato versions of the V8 Vantage were made, and to this day the car’s uncompromising design is a talking point wherever it goes. This particular model is the first “production” V8 Vantage Zagato coupé constructed and was ordered with Gladiator Red coachwork and Tan hide before being enjoyed as a road car for two years, before comedian and actor Rowan Atkinson, a well-known enthusiast and keen amateur racing driver, bought it in 1998 and set about having it transformed for racing.

Atkinson returned his Zagato to Aston Martin Works Service, in Newport Pagnell, for redevelopment for competition use. More than 100 kilos (220 pounds) of curb weight was shed during this process, power was increased to 482 hp, the suspension and brakes were uprated and performance took a suitably impressive leap forward.

It is arguably the most developed, highly tuned, and historically significant example of the lot—but be warned … it’s also for sale through dealer Dylan Miles. If it gets under your skin at Shelsley Walsh it could ultimately prove to be an expensive day out. 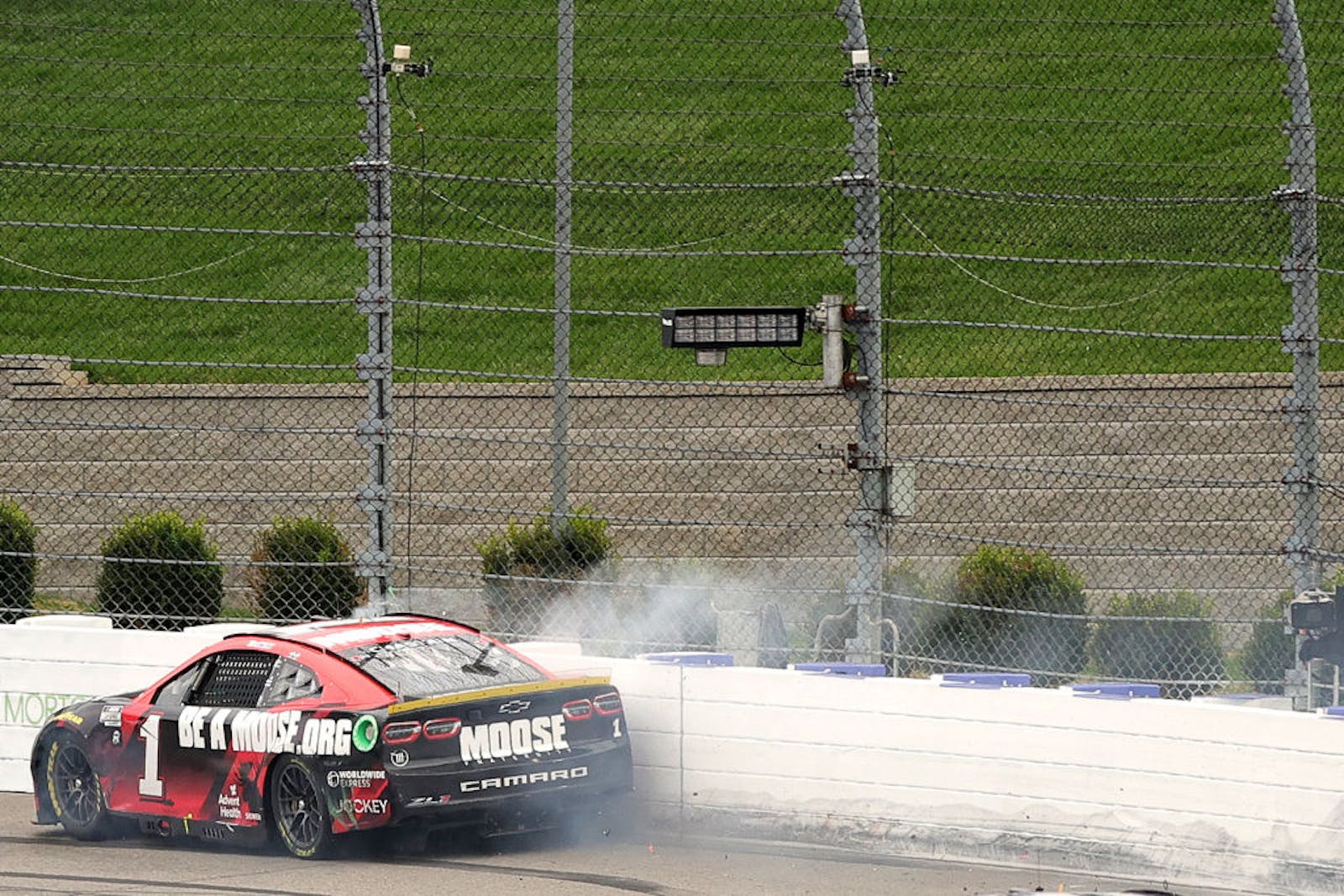 Get an insurance quote
A Story About
Share Leave comment
Read next Up next: Low Class Yuppie: Why I love Land Rovers