This fabulous Fiat is the Dino you can still afford

Ferrari Dinos have rocketed in value in recent years, but if you don’t mind a Fiat badge there’s a Dino to be had at a fraction of the cost.

Even better, the 1966–72 Fiat Dino actually packs a Ferrari engine because Ferrari needed help to homologate its 2.0-liter V-6 for Formula 2. The F.I.A. required Ferrari to build 500 of these engines per year, and the Maranello factory simply didn’t have capacity. Fiat stepped in to build the quad-cam V-6s in sufficient numbers, on the proviso that it, too, could use the engine.

In the Ferrari 206 Dino the engine was positioned amidships and mated to three Weber carburetors for a claimed 180 hp. In Fiat guise the engine produced 160 hp, was mounted up front, and drove the rear wheels via a five-speed manual transmission and a limited-slip differential—a first for Fiat. Suspension was independent double wishbones at the front, with a live axle at the rear.

Named in honor of Enzo Ferrari’s son Alfredino who died at just 24 years of age, the Dino had the performance to live up to his legacy. Top speed was 130 mph and 0-60 mph took around eight seconds.

The Fiat Dino was offered in two body styles. The sportier Spider, by Pininfarina, had 2+1 seating, while the longer-wheelbase Bertone-styled Coupe had two small seats in the rear and a sweeping fastback design penned by Giorgetto Giugiaro. 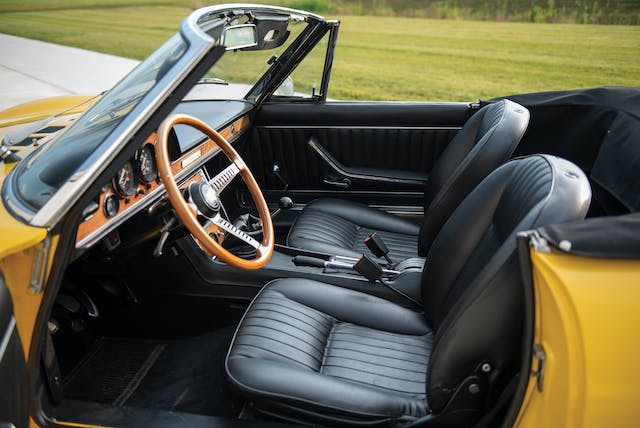 Early Spiders were actually offered as a notch below the Coupe, reflected in the price (which started at $5400), the vinyl dashboard, and the plastic-rimmed steering wheel. The wooden dash and wood-rimmed wheel of the Coupe was classier and in short order adopted by the Spider.

From 1966 to 1969, the first 4833 Fiat Dinos came with that 2.0-liter V-6, but for its final four years until 1973, Dino engine capacity was increased to 2.4 liters and power hiked to 180 hp. The later Dinos also added a dogleg ZF gearbox, improved brakes, and an independent rear suspension. Options such as leather upholstery were also added. Total production reached 7803 by the time the line stopped, and it’s the later cars that are most in demand.

The updates made for improved ride and handling, despite the extra weight of the larger engine, and reliability mostly took a step forward, too. The original sodium-filled exhaust valves on the 2400 are prone to damage, and the early electronic ignition system, known as Dinoplex, hasn’t really stood the test of time. The biggest potential problem with any Dino will be rust, with A-pillars and sills being the most vulnerable areas.

The most desirable Dinos of all are the 2400 Spiders, of which just 420 were built. One just sold at RM Sotheby’s Elkhart Collection auction for a lively $145,600. However, compared to the Ferrari 246 Dino which sold for $318,500 at the same event that’s still quite a bargain.

For a real steal, opt for a Coupe. One can still be yours for less than $50,000. If you don’t mind importing one from Europe Silverstone Auctions has a delightful Grigio Chiaro Coupe for sale in November.

Car Profiles After 20 years, is the Porsche Cayenne coming in from the cold?
Steve Bennett