In the latest episode of Jay Leno’s Garage, Jay takes a spin in a 2002 Pontiac Firebird Trans Am that he’s owned since new. The T-top, six-speed car is pretty loaded and is equipped with the WS6 package, meaning it has 17-inch wheels, a road-hugging suspension, and Ram Air induction that brought the 5.7-liter LS1 to 325 horsepower, and perhaps a bit more.

The last of the LS1 F-bodies, including the Trans Ams built in their final year of production in 2002, got the intake manifold from the LS6. The LS6 was found in the Corvette Z06 and Cadillac CTS-V and made at least 385 hp, thanks in part to that improved manifold along with a lumpier camshaft. Considering the LS1 also has the same camshaft as the 350-hp LS1 that was found in the C5 Corvette, there’s reason to believe that GM was sandbagging the numbers in the Camaro and Firebird just a bit.

Leno gives a tour of the car in his garage, walking us through the car’s features and specs as he pops the hood and trunk and then goes over the interior. The truly interesting part is when the car goes up on the lift and Leno shows the pristine undercarriage, he describes it as “not perfect.” With just a bit of dust and zero rust and grime to speak of, Leno’s clearly been spoiled by his southern California climate and well-maintained vehicles. True, the car is only nearly 20 years old, but that undercarriage is immaculate. 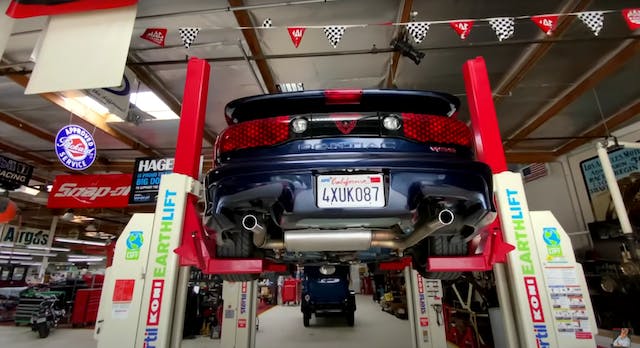 The rest of the video has Leno rowing through the gears and giving the car effusive praise, understandable considering it’s given him a lot of service with no problems. His understated Trans Am, without the optional “screaming chicken” on the hood, is able to fly under the radar a bit, but there are still those that recognize the performance behind that twin-nostril hood.

All these years later, the last of the Trans Ams still represents solid performance and can be quite a bit of fun, even in stock configuration. Good luck finding one this nice though! 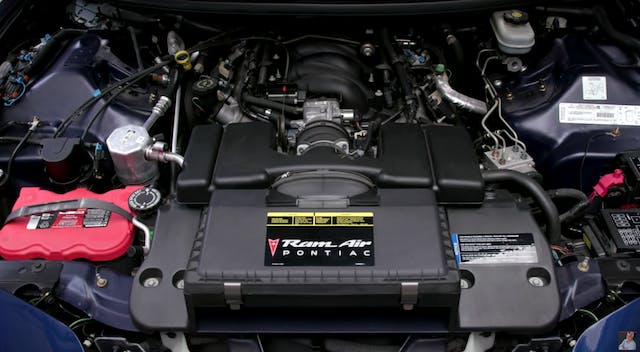 Get an insurance quote
A Story About
Share Leave comment
Read next Up next: Peek inside FDR’s flathead V-12-powered, armored 1942 Lincoln

I would like to see this car. Had several TA’s back in the day,
know them well. I live in downtown Chandler, so close. Please
let me know when I could see it. This afternoon? Tomorrow
morning? 602-586-8089