That delicious symbol of France, the baguette, might soon become protected by UNESCO. According to CNN, bakers are petitioning The United Nations to include the French stick on its list of intangible treasures, and that got us thinking, obviously, about breadvans.

In our world that’s the long-roof, straight-back style pioneered in 1962 by Giotto Bizzarrini and Piero Drogo for Count Giovanni Volpi’s Ferrari 250 GT SWB, and it’s a style that should be celebrated and protected just as much as the flour, water, yeast, and salt-based product that sandwiches your favorite brie. While the French produce and consume six million baguettes a day, breadvans are much more scarce. In fact you can count the number on your doughy fingers.

The original breadvan came about when Scuderia Serenissima owner Count Volpi wanted to modify a Ferrari 250 GT SWB to race against the works GTOs. Unable to get one from the factory, Volpi privately bought the car which came second in the 1961 Tour de France. Bizzarrini and Drogo re-engineered the car for speed, but it was hardly beautiful. When French media saw it at Le Mans they dubbed it La Camionette, meaning “little truck.” The British were more blunt and called it The Breadvan. Although it failed to finish on its debt the Breadvan would race to several victories and, more importantly, lead to a whole new genre of car design.

Dutch designer Niels van Roij’s take on the breadvan has proven almost as controversial as the original. A one-off, built for a German client, the car is based on a Ferrari 550 Maranello. We reckon that his blend of classic, modern classic and future design is a success, but it has its detractors. It’s hard to argue with the quality of the coachbuilding and the attention to detail, and whether you like the result or not, it’s good to see the art of engineering individual cars is still alive and well in the Breadvan Hommage.

The Lotus Europa is arguably the only true breadvan to be produced in significant numbers, with over 5000 assembled over a decade. It was the first mid-engined Lotus road car and, in typical Lotus-style, the design was as minimalist and light as could be. Form very much followed function. The engine sat behind the occupants covered by a low rear deck that made it relatively easy to access when things went awry (because Lotus). With a steel chassis and fiberglass body the featherweight Europa was at its best when fitted with a Ford-Lotus twin-cam, 1.6-liter motor.

When does a breadvan become a shooting brake or vice versa? Actually, does it matter? As long as a car has been extended beyond its original design incarnation then we’re happy to include it. In the case of this 1965 Ferrari 330 GT 2+2 by Vignale, we’re positively delighted. Originally sold in Connecticut by Luigi Chinetti motors, the company bought the car back from its first owner and shipped it home to Italy for this incredible conversion. The car took pride of place on Vignale’s Turin Motor Show stand in 1968 and was owned by high-hatted pop personality Jay Kay of Jamiroquai. It last sold for $313,000 at RM Sotheby’s Petersen Automotive Museum in 2018. 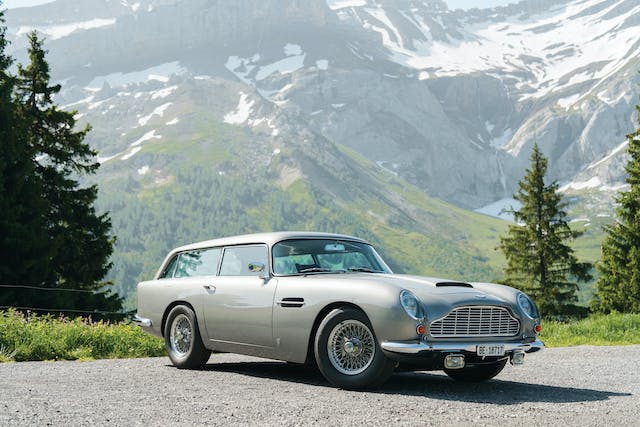 In an unusual turn of events it was Aston Martin boss David Brown who decided that the DB5 wasn’t fit for purpose. To fit his polo gear and his dog inside he turned to coachbuilder Harold Radford to extend the roofline of the most famous car in the world. The conversion reportedly cost about twice the price of an average English home at the time, but these days the 12 examples built are worth considerably more. In 2019, RM Sotheby’s sold one for $1,765,000.

In 1970 Queen Elizabeth II gave her daughter Princess Anne one of the best 20th birthday presents a young woman could wish for—a Reliant Scimitar GTE. Powered by a Ford V-6, with a two-door long roof body by Ogle design it would be the first of eight GTEs for the Princess. Despite being more expensive than a comparable MG enthusiasts loved the styling and the car’s impressive performance. Today they’re comparatively inexpensive, with good ones available in the U.K. for less than $17,000. That’s a right royal deal.

This swish Swede was the last hurrah for the P1800. Built for just two years it effortlessly incorporated the cool lines of the coupe into a more practical wagon style. The 1800ES is rather the antithesis of the Lotus take on the breadvan, with its Volvo safety-as-standard approach weighing it down, less than 130 hp from its 1.8-liter engine and either a four-speed plus overdrove manual or three-speed automatic making it a little lethargic. It’s still glorious to look at and prices are on the up. A concours-ready example is worth $63,400 according our valuation guide. And if that’s too rich for you could always consider its spiritual-successor, the 1985 480ES, which is now old enough to import from Europe.

Jaguar made the E-Type’s successor in coupe and cabriolet forms, but it would take British coachbuilder Lynx to turn the XJ-S into the Eventer. Just 67 of these stunning machines were hand-built, with each car taking over three months to complete. Most Eventers were based on the 5.3-liter V-12, but some featured the 4.0-liter straight-six engines, and one was powered by a 6.1-liter V-12 tuned by TWR. It was up for sale at the sadly-canceled, Bonhams’ Goodwood Auction in 2020 where it was expected to fetch up to $90,000.

People call it the “Clown Shoe” but we prefer to think of the wonderfully weird BMW M Coupe as a breadvan. Of all the cars on this list, the Z3-based M Coupe offers the best balance of driving excitement and baguette carrying capacity. Powered by a 316-hp 3.2-liter straight six, available only with a manual transmission, a limited slip differential, and a stiff body and chassis, the M Coupe is one of the last pure BMW drivers’ cars. The later Z4 looked a little less ungainly, but was never quite as much fun behind the wheel. Early models in excellent condition can be had for around $40,000.

Should you wish to carry your baguettes in truly authentic style then you’ll need an actual French bread van: the Citröen HY. For over 30 years after World War II these wonderfully simple vans adopted the ethos of the 2CV and supersized it to carry produce all over Europe. With a unibody design and lightweight corrugated steel panels it actually shared its engines with the Traction Avant and it was only those body panels and the headlights which could, technically, be attributed to the tin snail. Today no self-respecting coffee or food truck business should be without one of these Citröens.

Get an insurance quote
A Story About
Share Leave comment
Read next Up next: Confessions of a car restorer