The timeless styling and formidable performance of Toyota’s 2000GT elevated it into the automotive pantheon of greats, but perhaps the most impressive line on this swooping coupe’s resume is how it catapulted Toyota from the post-WWII doldrums onto the world stage.

There’s no replacing 12 minutes of cinematic excellence, but in case you’re short on headphone battery capacity or sitting somewhere you can’t blast it on full volume, here are 10 facts from Jason’s video that capture why the 2000GT became such a legend.

Before the 2000GT, Toyota flopped in America

Toyota’s first full-scale passenger vehicle was the 1958 Toyota Toyopet Crown, a buzzy little runabout that lacked the power or the reliability to impress American buyers. Most automakers have to spend decades adjusting to and building their reputation in a new export market, but the 2000GT—and the performance records it snatched from the likes of Porsche—erased the lackluster Toyopet from America’s collective consciousness just eight years later. Bravo, Toyota.

The 2000GT exists because Toyota started from scratch after WWII

After World War II, the Japanese auto industry was struggling to regain its footing. Many chose to license production of existing vehicles from European carmakers, but Toyota decided to start from square zero, establishing its own design, engineering, and production divisions. Rebuilding itself from the ground up put it a few steps behind contemporary manufacturers, but the 2000GT, and many models after, prove Toyota’s decision wise.

The 2000GT’s codeveloper was originally encouraged to work with Nissan

In the early ’60s, most knew Yamaha as a manufacturer of small motorcycles and musical instruments. But the company was toying with the idea of getting into the car business, initially eying the kei cars—tiny, city-friendly vehicles popular in Japan. Yamaha shared a creditor with fellow Japanese brand Nissan, who was already in the automotive sector. The creditor tried to encourage Yamaha to partner with Nissan, no doubt because shared costs mean less risk for the lender.

Nissan and Toyota each initially rejected Yamaha’s prototype, the A550X

At its creditor’s behest, Yamaha agreed to do some research and present its findings—perhaps even some sheetmetal—to Nissan. Following a world tour in which a few of its engineers studied the premier grand tourers of the day, Yamaha formed a division to set about building not a kei-class runabout but a sports car. That project was dubbed the A550X—a two-seater boasting a monocoque chassis and powered by a twin-cam four-cylinder engine. Nissan didn’t like the idea and rejected Yamaha’s proposal. Down but not out, Yamaha brought the A550X to Toyota, who returned the same answer.

Toyota soon realized the value of Yamaha’s legwork and resources, however, and struck up an alliance. The two firms purchased the era’s greatest-driving cars to serve as benchmarks for their project: A Triumph TR2, an MGB, a twin-cam Alfa, a 911, an E-Type, and a Lotus Elan.

While the E-Type is often touted as the European counterpart of the 2000GT, it was the Elan that actually influenced the Toyota. The Jaguar’s chassis proved far too advanced for the young Japanese partners, but the Elan’s simpler backbone chassis was something they could afford to produce. Toyota and Yamaha engineers cribbed the design almost wholesale from the Elan—the only changes really were some thicker steel and slightly revised dimensions in a few key areas. The four-corner double-wishbone suspension is virtually identical to that of the Elan.

Credit the suspension for that gorgeous silhouette

The four-corner suspension required design compromises, but the results gave us one of the most beautiful cars in history. Take a look at the character line running below the greenhouse and swooping upward behind the door shutline. The Elan’s rear strut mounting point was so high that, rather than adjust it and risk ruining the suspension dynamics, the designers hid the line behind sheetmetal. This is what we’d call “a damn fine choice.”

A German tried to take credit for the 2000GT

As mentioned on an earlier episode of Revelations, in which Cammisa dives into the origin story of Nissan (then Datsun)’s inimitable 240Z, German industrial designer Albrecht Goertz tried to take credit for not one but two Japanese designs. Before he claimed the 240Z as his own, he called dibs on the 2000GT’s gorgeous looks. Zat will be a nicht on our end, good zir.

Even Yamaha’s piano team got involved 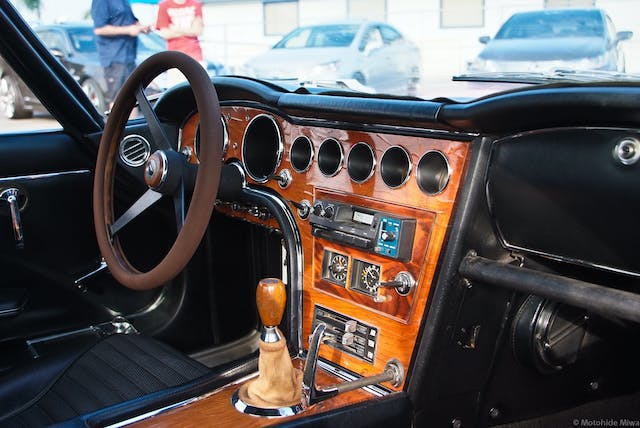 Remember Yamaha’s musical instrument division? It, er, played a part in the 2000GT, too: specifically, by sourcing, cutting, and finishing all that gorgeous wood. Unlike other cars of the time, which made do with overlays, that trim is actually wood. The dash is a 6mm slab of rosewood treated with polyester resin for protection. The steering wheel and shift knob are actually mahogany. (Somewhere, a Morgan engineer furiously applauds.)

46 years later, Toyota and Yamaha got back together

The 2000GT may be the most prominent, but it’s not the only example of Toyota and Yamaha teaming up to make something great. More than four decades after the 2000GT took the world by storm, Yamaha was invited back to Toyota HQ to help with a similar halo car: the Lexus LFA. Yamaha helped develop a wildly intricate intake manifold that helped the 553-hp, 4.8-liter V-10 emit an exhaust note that remains one of the greatest in the history of cars.