By the late 1980s, Oldsmobile tried to differentiate itself from GM’s four other core brands (Chevrolet, Cadillac, Buick, and Pontiac) by promoting its technological advances, starting with the dual-overhead-cam 2.3-liter Quad 4 engine introduced for the 1988 Cutlass Calais. This 150-horsepower cast iron block and aluminum head four-cylinder soon made its way into other GM products, but as it was designed by Oldsmobile, the brand decided to push it a whole lot further. What’s more, the Quad 4 was also supposed to evolve into a 5.0-liter V-8 called the Quad 8.

Based on a modified March 84C CART chassis, the first two Aerotech prototypes were ready by the summer of 1987. Oldsmobile initially made two before adding a third, because while GM’s VP of design Ed Welburn’s Porsche 917LH-inspired plans called for a long-tail car optimized for top speed, the father of the Quad 4, Chief Engineer Ted Louckes wanted a short-tail high-downforce variant to set the closed course record at the Indianapolis Motor Speedway. All Aerotech prototypes were optimized in the wind tunnel to feature active ground effects for additional downforce, while the task of driving these cars to victory landed on four-time Indy 500 winner A. J. Foyt‘s table.

While the short-tail Aerotechs featured a rear wing and a 2.0-liter Quad 4 turbocharged to 900-horsepower by Batten, the later long-tail car came with a twin-turbo engine tuned closer to 1000 horsepower by Fueling Engineering. This way, the Aerotechs combined Group B-levels of forced induction four-cylinder power with a Group C-inspired aero package.

On August 26, 1987, at the Fort Stockton Test Center in Texas, the short-tail Aerotech failed to beat the closed-course speed record held by Mercedes-Benz’s CIII-IV prototype at 250.9 mph. While the crew set out to improve the aero package, Foyt jumped into the long-tail chassis, only to get clocked at 275 mph over a flying mile.

The following day, Foyt averaged 267.399 mph in both directions, only to then set a closed-course speed record of 257.123 mph with the short-tail version as well, sending the Mercedes-Benz record straight to the depth of the Daimler archives. 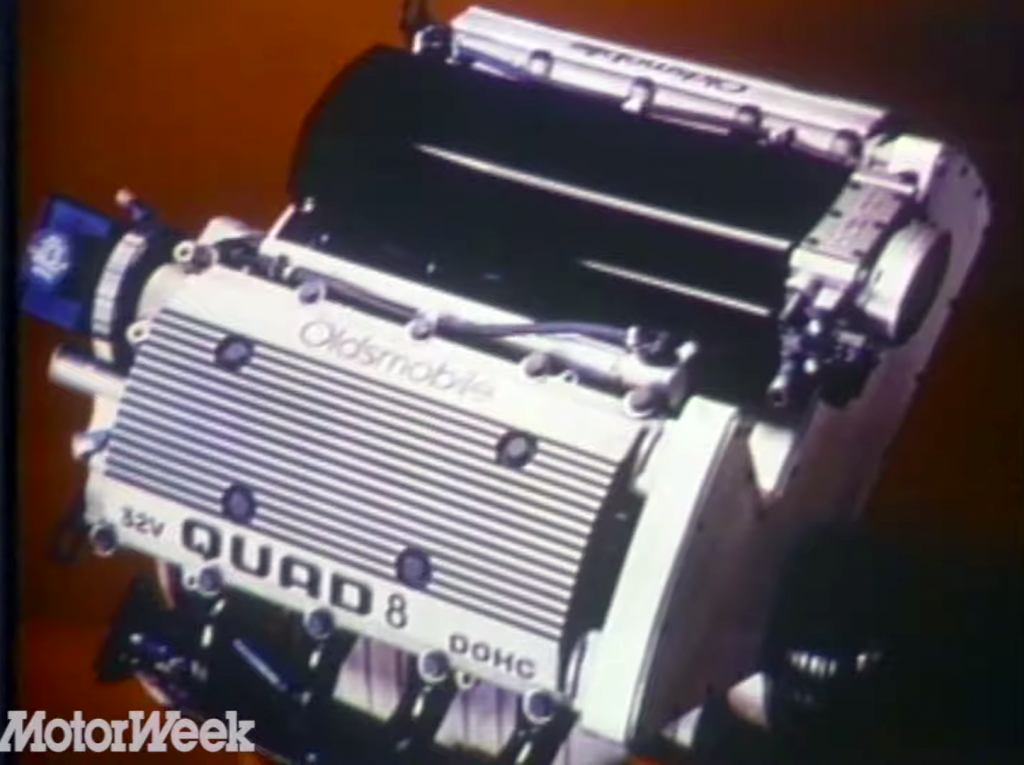 Interestingly, all this success with the Quad 4 pushed Oldsmobile towards creating a 32-valve 5.0-liter V-8 called the Quad 8, with the company even displaying a mockup of this engine at one point at the SEMA show. Unfortunately, the Quad 8 idea led nowhere, as GM shifted its focus to Cadillac’s Northstar V-8 development instead.

By the time the Oldsmobile Aerotech Aurora hit the scene in 1992, Olds didn’t have much choice for the production car but to use  the 4.0-liter version of Cadillac’s 4.6-liter Northstar engine, a DOHC V-8 they’d also call the Aurora. Meanwhile, equipped with functioning headlights for the first time, the V-8-powered Aerotech prototype went on to set 47 speed endurance records before the production Oldsmobile Aurora hit the streets for 1995.

The Quad 4 kept powering GM products until 2002. Of course, none of them were as spectacular as the long-tail Oldsmobile Aerotech of 1987:

Automotive History 10 VoltsWagens that led to the ID.4
Nik Berg