It wasn’t the first hybrid, but the 1917 Woods Dual Power was an electrically assisted marvel

We recently had a look at the Carter Two-Engine, an eight-cylinder, Brass Era–car equipped with two identical four-cylinder gasoline engines, ostensibly for the sake of reliability. Today we’re turning our eyes to another early automobile with double powerplants, though the two were not of the same breed: One chugged gasoline and the other ran on electrons. The Woods Dual Power wasn’t the first hybrid-powered car—that was likely the work of Ferdinand Porsche—but it was a remarkably sophisticated machine whose technology predated that of modern electric vehicles by nearly a century.

If you, like me, pore over histories of alternatively powered automobiles, you’ll often read that, in the early days of the motorcar, gasoline fought with steam and electricity for dominance. While it’s true that Stanley, White, Doble, Baker, and Detroit Electric sold advanced steam- and electric-powered automobiles when gasoline-powered cars were still relatively primitive, the truth is that the most successful electric car company before the modern era—Detroit Electric—sold fewer than 5000 vehicles in its peak year of production (1914). By comparison, Henry Ford sold over 200,000 Model Ts that year alone, a number that would more than double by 1916, when the subject of the present article, the Woods Dual Power hybrid, was introduced. By the mid-teens gasoline was simply a more practical power source. Steam-powered cars needed to generate steam before they could be driven and electric automobiles faced the same obstacles that they do more than 100 years later: limited range and long recharging times. 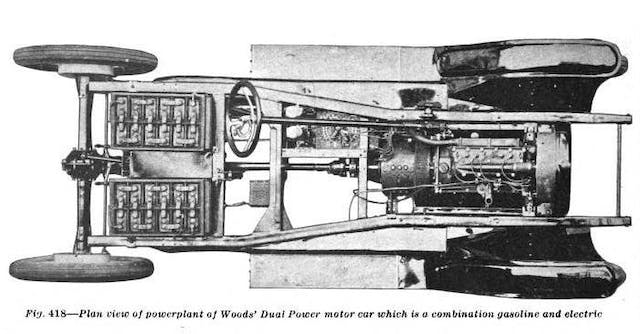 Still, gasoline power had its shortcomings. Gas-powered cars were noisy, dirty, and required constant maintenance. In that era, the vast majority of internal-combustion engines also needed to be hand-cranked to start. 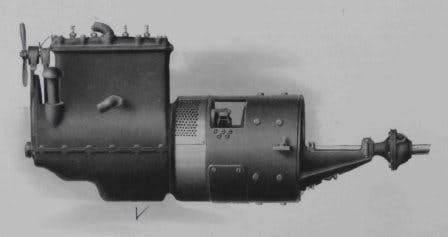 Woods Motor Vehicle Company had been producing electrically powered automobiles and commercial vehicles since 1899. It’s likely that Clifton Woods, the firm’s founder, saw the Model T’s sales numbers and embraced, at least partially, internal-combustion power. Woods thought that if he joined together gasoline and electric powerplants serially, their combined merits would overcome their individual flaws. Unfortunately, though his basic concept was sound and the Dual Power did work as advertised, the Dual Power was woefully under-powered. Woods decided to equip his hybrid with a 14-hp gasoline engine supplied by Continental and a General Electric–supplied electric motor that meted out 5 to 6 hp and was powered by a smaller bank of batteries than used by contemporary electric vehicles. While he managed to avoid the packaging constraints of fitting a large battery pack, and the hassle of starting a combustion engine, he essentially scrimped on both electric motor and engine. Perhaps he genuinely believed his system was more efficient. Maybe he foretold the dim future of electric cars, or his hand was forced by manufacturing costs—unfortunately, while Wood’s creation seems to have worked better than pure battery-electric vehicles, it couldn’t compete with other cars in its price range.

The Dual Power was advertised as “a self-charging, non-stalling, two-power car with unlimited mileage [range], adequate speed, and greatest economy.” Among the Dual Power’s unique selling points were a top speed of 35 mph, compared to the 20 mph that most electric cars could accomplish; easier operation, as there was no gear shifter or clutch to operate; and lessened maintenance. Plus, you didn’t need to install a home charger or find a public charging station. You can peruse the Woods Dual Power sales brochure here. 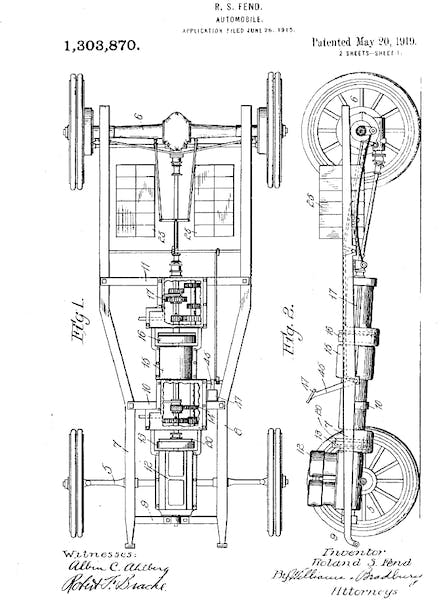 The Dual Power was based on the work of inventor Roland S. Fend (U.S. Patent # 1,303,870), an electric vehicle pioneer who worked for the leading EV makers of the day, like Baker and Rauch & Lang. The combustion engine (called an “explosion engine” by EV makers) was a L-head, inline four-cylinder displacing just 68.7 cubic inches (approximately 1125 cc). It was connected to what Woods called a “dynamotor,” a compound-wound DC motor with both series and parallel windings rated at 48 volts and 60 amps, through a Cutler-Hammer electromagnetic clutch. Exide provided a purpose-designed battery pack of 24 cells, rated at 115 amp hours at a five-hour discharge rate, about half the size and weight of contemporary EV battery packs. The electric motor was connected to the rest of the drivetrain by a standard driveshaft.

There was no transmission. When the clutch was activated the combustion engine would be connected to the final drive through the electric motor’s armature. Operating controls were simple—a steering wheel mounted with two control levers, one longer than the other, a brake pedal in front of the driver, a reverse pedal below them, and a locking, multifunction “ignition” switch. Instruments were also simple, with a combined ammeter/charge indicator and a Stewart Warner speedometer and odometer. For safety purposes, all high voltages were controlled through solenoids.

Getting the Dual Power up and running was straightforward. The switch on the steering column was turned to the On position. That activated the ICE’s ignition circuit as well as part of the circuit for the electric motor’s main solenoid. The longer of the two “throttle” levers was moved forward, which completed the circuit for the main solenoid, allowing current to flow to the traction motor and nudging the car forward. The longer lever was also connected to a field rheostat mounted under the floorboard; when the lever was pushed farther forward, the field resistance on the motor changed, increasing the motor’s speed.

The Dual Power operated on batteries alone up to about 15 mph, though the combustion engine could be engaged and started at any time once the vehicle was in motion. That was effected by pushing forward the shorter of the two levers on the steering wheel. That lever was connected to the throttle on the combustion engine’s carburetor and a solenoid that operated the magnetic clutch. Because it was already being spun at a high crank speed by the electric motor, the inline-four could fire up immediately. Woods claimed that the dual powerplant layout also made the car stall-proof: Because the two powerplants were connected, either could spin along while the other propelled the car. Should the combustion engine become overloaded and start to “lug,” all the driver had to do was move the longer lever forward and energize the electric motor to provide a little extra oomph. 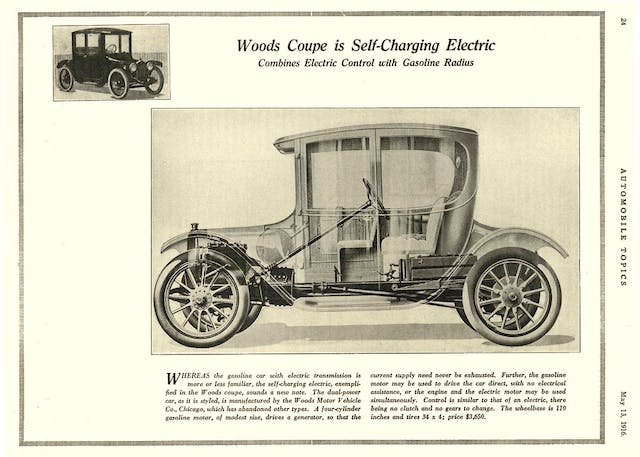 The idea was to use the electric motor’s torque to get the 3600-pound car moving and, later, to engage the gasoline engine to sustain the Dual Power at moderate speeds. At that point, the lever for the electric motor would be pulled back. Under those circumstances, the motor would be operating as a generator, putting out more current than it was drawing. In other words, the Dual Power could recharge its own batteries on the fly. By nineteen-teens, knowledge of battery chemistry had progressed to the point where chemists and engineers understood that overcharging or completely depleting the batteries created problems like gassing and sulphating. Woods encouraged owners to charge or discharge the batteries “at will” at any speed between 10 and 30 mph and to manage the batteries’ charge properly to prolong battery life.

Along with that early battery-management system, the Woods Dual Power had regenerative braking—what the company advertised as “Dynamic braking”—effective at speeds above 6 mph. To first slow the car, the electric motor’s control lever would be switched to its initial position. That would put the motor in full generating mode, slowing the car as its forward motion put an electrical load on the generator. The gasoline engine would then be throttled back, but the driver would leave the clutch engaged so that engine braking would further slow the vehicle. To come to a complete stop, the driver disengaged the the electromagnetic clutch and depressed the brake pedal to activate the mechanical drums. That pedal did more than operate the brakes, though: It also shut the ICE’s throttle, disengaged the clutch, and moved the field rheostat to its regenerative position.

Since there was no conventional transmission with a reverse gear, to go backwards you had to engage the mechanical brakes, which were interlocked with the reverse pedal. Then, you’d press the reverse pedal to flip the polarity to the direct-current motor, making it spin backwards. The reverse pedal also disengaged the magnetic clutch so the combustion engine—which was still running forward—disconnected from the reverse-spinning electric motor.

The Wood Dual Power was an impressive feat of technology, using mechanical linkages and solenoids to provide relatively simple controls for a fairly complicated drivetrain. Today it would take integrated circuits with a host of transistors along with thousands of lines of code to do the same thing.

Today’s car companies can’t switch from gasoline to hybrids and electric power fast enough, but Woods Motor Vehicle Company went in the other direction, going from electric to hybrid power in 1916. They were out of business by 1918, after selling just a handful of Dual Powers and fewer than 14,000 Woods branded vehicles in total.

Why didn’t the Woods Dual Power succeed? To begin with, it was not an inexpensive car. $2650 in 1916 works out to more than $66,000 in 2021 dollars, about what a decently equipped Mercedes-Benz E-Class will run you today. A Dual Power cost as much as four Model Ts, and while it was economical to operate (it returned a claimed 48 mpg), we know that rich folks don’t buy Teslas to save on fuel costs. Economy has never been a factor in selling expensive cars.

In addition, the Dual Power apparently wasn’t as smooth and as reliable as Woods had promised, resulting in some changes for the 1917 model year. It failed to woo well-heeled, luxury-minded customers with speed, either. While the Woods Dual Power was faster than competing electric cars, its top speed of 35 mph was no match for the plebian Model T’s 40- to 45-mph V-max, let alone the speeds posted by contemporary Duesenbergs or Bugattis. Specifying a larger, more powerful gasoline engine might have made the Dual Power more competitive in the market, but electric vehicles were already declining in market share upon its introduction.

Today only four, or possibly five, Woods Dual Power cars exist. The 1917 Woods Dual Power Model 44 in the photographs accompanying this post is on display at the Driving America exhibit of the Henry Ford Museum in Dearborn, Michigan. While it is in original, unrestored condition with just 11,085 miles on the odometer, it is not in operating condition. Another 1917 Dual Power has been on display at the Petersen Museum in Los Angeles. It is owned by the Natural History Museum of Los Angeles County and it has been the subject of a museum-quality conservation by Howard Auto Preservation. The only operational Woods Dual Power on record is a restored example residing at the Louwman Museum in the Netherlands.

Brian Howard, who performed the conservation of the car in Los Angeles, said that he believes that a fourth Woods Dual Power body exists, though it has been mounted on a Stanley Steamer chassis. It’s possible that Howard might have confused that with this car, a 1917 Woods Dual Power whose body had been destroyed in a fire and was subsequently rebodied as a custom roadster in the style of Hispano-Suiza. If you’d like to own a piece of hybrid history, that car is listed for sale at £35,000, about $48,000 USD.

Automotive History Exit via sunroof, and other tips to reorient the microcar novice
Paul Duchene