The Buick GNX. The Nissan 300ZX convertible. The BMW Z3. The Pontiac Trans Am WS6. The Mitsubishi 3000GT Spyder. The Saab 900 convertible. The Porsche 944 and 968 convertibles. The Chevrolet SSR. These and other German, Japanese, and American enthusiast vehicles were all touched by one huge business empire with the unlikeliest beginnings. That lineage can be traced back to a single man cutting holes in the roofs of cars in a body shop, in a back alley of San Francisco. That’s where ASC began.

“He really did start from scratch,” says Henry “Hank” Huisman, who worked for the American Sunroof Company in the 1970s. “[Heinz Prechter] had a small shop he rented from George Barris, bringing in Golde sunroof products from Germany. Barris told him to go to the Ford Motor Company, and that’s really where it all began.”

Huisman is currently the go-to source if you’re interested in one of the fairly rare ASC/McLaren Capris or Mustangs. He bought up most of the remaining stock once ASC stopped building their specially modified Fox-body machines and is today something of a walking encyclopedia on ASC history.

The American Sunroof Company was founded in the fall of 1963 by Heinz Prechter, an enterprising foreign exchange student from what was then West Germany. A farmboy who loved wrenching in his uncle’s auto repair shop, Prechter had been training as a mechanical engineer and was on a one-year visa to the U.S. He’d moonlighted as a cab driver in Germany to make the trip possible.

Prechter also worked part-time in a body shop while he studied at San Francisco State, and it was here that he made the introduction sparked ASC’s genesis. In Germany, he’d been at school with Hans-Dieter Golde, scion of a family company that made optional canvas and sliding metal roofs for the Volkswagen Beetle and Porsche 356. Golde roofs had appeared on American cars before, such as the 1960 Thunderbird, but sunroofs, in general, weren’t all that common. Prechter used his connection with the Golde family to make a pitch to his boss at the body shop.

Soon enough, Prechter had opened up a branch of ASC in Los Angeles and was installing sunroofs in cars belonging to the likes of Frank Sinatra and James Garner. He rented a garage from legendary customizer George Barris, which his business soon outgrew. Barris, however, had been impressed by the young German’s workmanship and recommended him to Ford. Prechter did a number of special projects for the Blue Oval, including a sunroof installation in a Lincoln for President Lyndon B. Johnson, and then landed a larger contract that spurred on his move out of L.A.—to Detroit.

In 1967 and 1968, ASC began installing factory sunroofs in Mercury Cougars, including the highly-optioned XR7-G model. Of the latter, two-thirds left the factory with ASC sunroofs. ASC was now part of Detroit’s supply chain.

As of 1970, ASC was still operating in California and had consolidated its Michigan operations. It had also formed a new subsidiary called ASC Custom Craft, which sold—there’s no other word for it—pimpmobiles. The Custom Craft catalogue was filled with custom hood ornaments, “Super-Fly” headlight treatments, fender skirts, and dash-mounted televisions. You could order all of this stuff from your local Cadillac or Lincoln dealer, and Custom Craft’s body division also converted a number of DeVilles, Fleetwoods, and Eldorados into wagons.

At the same time, ASC’s main operation was to supply sunroofs and T-tops to multiple manufacturers. The company employed over 2000 people and was resilient enough to suffer through tough times in the early 1980s. During that time, ASC would produce possibly the most badass Buick of all time.

McLaren Engines was started by Bruce McLaren in Michigan, in 1969. In those days, it was a specialist engine development team set up to support Indy and Cam-Am racing, with the F1 efforts based in the U.K. By the mid-1980s, McLaren’s racing enterprise had largely moved across the Atlantic, but the Michigan-based outfit still did development work. ASC bought them up as a potential powertrain division, at first using the name when creating the ASC/McLaren Mercury Capris and Ford Mustangs.

Expensive in their day, the ASC/McLaren Fox-bodies didn’t feature much in the way of engine performance modifications, but they did receive some suspension tuning. They’re highly collectible today, especially the Capri versions. ASC/McLaren, however, had something even more potent yet to come.

In 1987, a sunroof company wound up building the definitive turbocharged muscle car: the GNX. Standard Buick Grand Nationals arrived at ASC/McLaren to receive an upgraded Garrett turbocharger, reworked transmission and suspension, and 16-inch mesh wheels with high-performance rubber. At the time, it was one of the quickest machines on the road, capable of holding its own against Italian exotics.

Only 547 GNXs were built, and prices today are steep. Hunt around a bit, and you can find yourself a more affordable ASC/McLaren in the form of the Pontiac Grand Prix Turbo. These have a turbocharged 3.1-liter V-6 with the McLaren touch, and the cars rare but accessibly priced. 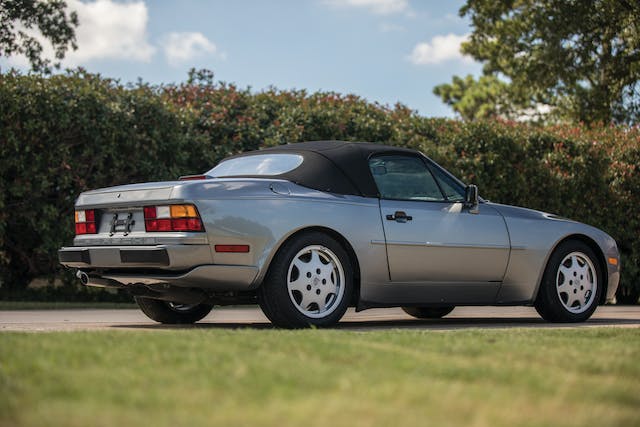 ASC helped Saab design its 900 convertible and entered into a contract with Porsche to build the 944 convertible. Prechter GMBH, the German subsidiary of the spreading ASC empire, purchased a well-established German coachbuilder, built a new factory, and began cranking out 944S2 drop-tops. Porsche executives were so pleased with the arrangement that they gifted Prechter a one-off four-doored Porsche 928.

Meanwhile, in Long Beach, California, ASC was turning Japanese cars into convertibles. These ranged from relatively affordable fare like the Celica and Nissan 240SX to the enormously complicated Mitsubishi 3000GT Spyder. Cars left Japan with a little extra bracing but their roofs intact. ASC cut and reworked everything, with the Spyder’s folding hardtop a lighter and more elegant solution than the Mercedes-Benz 500SL‘s.

At its peak, ASC was a half-billion-dollar company. If you bought a made-in-Ohio Honda Accord with a sunroof, you took home an ASC product. If you bought a Pontiac Trans Am with the Ram-Air WS6 snout, that hood was also an ASC effort. If you wanted a BMW Z3, then both the original soft top and optional hardtop were both made by ASC. The company also began producing all kinds of conceptual vehicles for OEMs.

Yet things were not well with Heinz Prechter. Battling mental illness, he died by suicide in 2001. He was inducted into the Automotive Hall of Fame in 2004, and in the following year, ASC produced its one-millionth convertible. The company would eventually dissolve in 2017.

“My favorite vehicle they made is probably the SSR,” says Huisman, “It was a pretty neat project, something that nobody else was doing.”

Today, the Chevrolet SSR is seen as a unique niche product. A production pickup truck with a folding hardtop and an available six-speed manual transmission is certainly a pretty unusual offering, and its fans love them.

That sentiment is true of nearly every vehicle ASC handled. Heinz Prechter looked up and found some sunlight in an opening. His company changed the automotive world.

For more information on the work going on to better understand brain health, check out the University of Michigan’s Prechter Bipolar Research Program.

Automotive History Decades before the internet, GM’s Futurliners offered a glimpse of what could be
Jeff Peek