4 cars that couldn’t save their doomed brands

The last-minute Hail Mary play is an age-old Hollywood cheat that’s saved hundreds of third-act plots from imploding on themselves. In the world of automotive drama, life occasionally imitates art. Not always so successfully, of course.

Car companies, like other large corporations, are sometimes victims of far-reaching economic circumstances beyond their control. When the tough times hit, a track record of recent poor decision making can be worse than just hobbling. The brands that fail (and there have been well more than a dozen over the past few decades) typically run out of cash at a crucial turning point and their parent companies can’t financially justify their continued existence.

They say it’s darkest just before they turn out the lights forever at the dealership. Most now-dead brands were on a path of steady decline before the shoe finally dropped, and that corporate doom and gloom has a way of obfuscating a clear forward path to profitability. Even if one last vehicle had the chance to turn the tide, the notion of an M. night Shyamalan-worthy twist just around the corner can seem too good to be true.

That got us thinking: Which brands had a secret star backstage that could have staved off bankruptcy and prevented a backslide into oblivion, had executives only stuck it out a bit longer? Perhaps these four dearly departed badges made the wrong choice at the wrong time and let a blockbuster slip between their fingers?

The Voyager/Caravan minivan was famously the savior of a moribund Chrysler in the mid-1980s, a profit stream that solidified the company’s finances alongside the legions of cheap and cheerful K-car variants that flooded the company’s dealers during the same era.

American Motors Corporation very nearly benefited from a similar type of box-driven bail-out. After plunging sales and mounting debt forced a partnership with Renault in the late 1970s, the company struggled to find its footing as it filled showrooms with uninspired French imports and the versatile, but unconventional four-wheel-drive Eagle family of proto-crossovers.

With only the wholly-owned Jeep subsidiary turning a profit, the Renault mothership offered what appeared to be a timely lifeline: a version of its very popular Espace van that had quickly won over European buyers with its excellent combination of interior (E)space, frugal (for the time) fuel economy, and an affordable purchase price. In fact, it’s safe to say that the front-wheel-drive Espace presented a formidable rival to the Dodge Caravan and the Plymouth Voyager, which were similarly-sized but not quite as sophisticated. The Espace made use of fiberglass-reinforced polyester body panels mixed with a roof, tailgate, and hood made of plastic, and it was aerodynamically superior to the more upright Detroit designs.

It looked like a foolproof strategy to print money for a company that had few resources available to design a minivan itself. Plans were laid to bring the Espace to America under the AMC badge for 1986, and Renault went to work adapting lighting and other details to U.S. standards. Unfortunately, in the interim Renault was forced to delay production of the U.S.-spec Espace due to a budgetary scuffle with one of its manufacturing partners. By the time the details were ironed out AMC had entered an unrecoverable tailspin, allowing Chrysler to swoop in and use all of its minivan money to buy out Renault, sunset AMC, and add Jeep and Eagle to its portfolio.

By the end of the ’90s, however, Chrysler’s minivan glory had largely faded and it was left with a basketful of brands that were dragging the bottom line from black to red. A plan was hatched to save at least one of these underperformers—Plymouth—by way of an exciting new product that straddled the line between SUV and van in a way few other American automakers had attempted.

The PT Cruiser was intended from the beginning to rescue Plymouth from itself. Its design surfed the neo-retro wave that also yielded the Plymouth Prowler, while borrowing useful bits from the successful Neon compact sedan. Its unusual “tall wagon” shape had been percolating for more than a decade behind the scenes, with Chrysler curious about the potential of a “mini-minivan” but unwilling to invest in actual production. Thatis, until the PT’s 1940s-influenced styling made the concept palatable enough to test audiences.

What happened? Well, the PT Cruiser went on to be a fantastic success … for Chrysler. Late in the planning stages, it was deemed that the hatch was a better match for Chrysler’s re-emerging passenger car lineup, and given that the planned procession of Plymouth-specific models following in the Prowler’s wake never materialized, no one wanted to waste what was predicted to be a popular model on a brand destined for the scrap heap.

It became a self-fulfilling prophecy: Plymouth never benefited from a million-selling model that would have no doubt extended its lifespan beyond its 2001 expiration date (the same year the PT debuted), and its dwindling fleet of badge-engineered also-rans guaranteed that Chrysler’s bean counters looked like geniuses in keeping the Cruiser out of Plymouth showrooms.

It turns out that Plymouth wasn’t the only flailing automaker to be victimized by its mightier corporate sibling as the millennium drew to a close. Chrysler also plucked Eagle’s last remaining hope for relevance straight from the hands of its designers, as part of the same sweeping changes that swallowed up the PT Cruiser.

To be fair, Eagle’s position in the Mopar multiverse was precarious right from the start. Having shed its rugged four-wheel-drive models for a mix of badge-engineered Renault and Mitsubishi platforms, the company made a somewhat weak attempt to lure in would-be Euro shoppers. The full-size Vision sedan was one of its few in-house, Chrysler-helmed products.

The LH-platform sedans (Eagle Vision, Dodge Intrepid, Chrysler LHS/Concorde) were due for a redesign for the 1998 model year, and Eagle had high hopes for the next-generation Vision. It was a chance for Eagle to step out from its corporate shadow and deliver a unique driving experience wrapped in an exciting shell. Things seemed to be going according to plan as the new Vision’s prototypes tooled around Auburn Hills bearing a strikingly sporty appearance.

And then, the guillotine. Chrysler signaled the end of the Eagle brand in 1997 (the final year for the Vision), with the 1998 Eagle Talon (the only other vehicle left in the line-up other than the Summit) rolling out as the company’s coda. It would be another 12 months before the second-generation Vision appeared on the landscape, retooled as the Chrysler 300M.

The 300M was far from a revolution, but it’s hard to argue that it wasn’t the apex of the LH platform in terms of performance and style. Smaller in size than the LHS that had preceded it, the 300M finally delivered the kind of handling that might have turned a few Audi-bound heads towards the Eagle badge, had it lived out its destiny as the Vision.

Without a supporting cast, it’s fair to say that Vision 2.0 might not have been enough to save Eagle from the wrecking ball. Tag in the PT Cruiser, however—and find a way to stuff all-wheel drive under its trend-baiting looks—and the pair could have sent Eagle down an intriguing, and maybe even profitable, path.

Why did it take until 2021 for an SUV builder to field a serious competitor to the Jeep Wrangler? Although past rugged trucks like the Toyota FJ Cruiser and the Nissan Xterra served a slice of that market, the go-anywhere, take-the-roof-and-doors-off crowd had to wait for the most recent iteration of the Ford Bronco for their alternative four-wheel-drive fix.

It’s easy, however, to imagine a divergent timeline in which Ford got beaten to the punch by an off-road brand that had everything to gain by standing toe-to-toe with Jeep in the Wrangler wars. In 2008, Hummer debuted the HX, a thinly-disguised concept that previewed a planned H4 model. Its primary appeal was that of a more legitimate off-roader, which would have distanced itself from the enormous H2 and the underwhelming H3 SUVs that had failed to tempt Jeep loyalists.

The HX shrunk Hummer’s distinct, chunky styling down to a two-door format, showing off a slanted rear treatment that in production was planned to give way to a more traditional passenger compartment (or even a pickup model). With the ability to remove the doors and the roof above both driver and the rear seat riders, the HX could be washed out with a hose after spending a full day tearing down the trail on its knobby, 35-inch tires. The truck boasted 13 inches of ground clearance and full-time four-wheel drive, and like the Wrangler Rubicon it could be had with locking diffs. The HX also rode on its own unique platform—a first Hummer which until that time had been forced to share GM’s pickup-based body-on-frame offerings.

The HX had great potential, but it never had the chance to move Hummer away from the blingy H2 and into a mud fight with the Wrangler. Almost as soon as it rolled onto the auto show circuit, the global recession and rising fuel prices spelled a grim forecast. Facing bankruptcy (and dealing with side-eye from the federal government about its truck-heavy, fuel-thirsty family of vehicles) General Motors had to choose between gambling on the would-be H4’s ability to drum up major sales, or simply taking Hummer out behind the barn. History records the mess that follows, but for a brief, shining moment it seemed like the HX Concept held all the answers to turning Hummer around. The nameplate is on its way back of course, as an all-electric GMC, but that six-figure SUV shares effectively nothing with the brand that met its end in 2010. 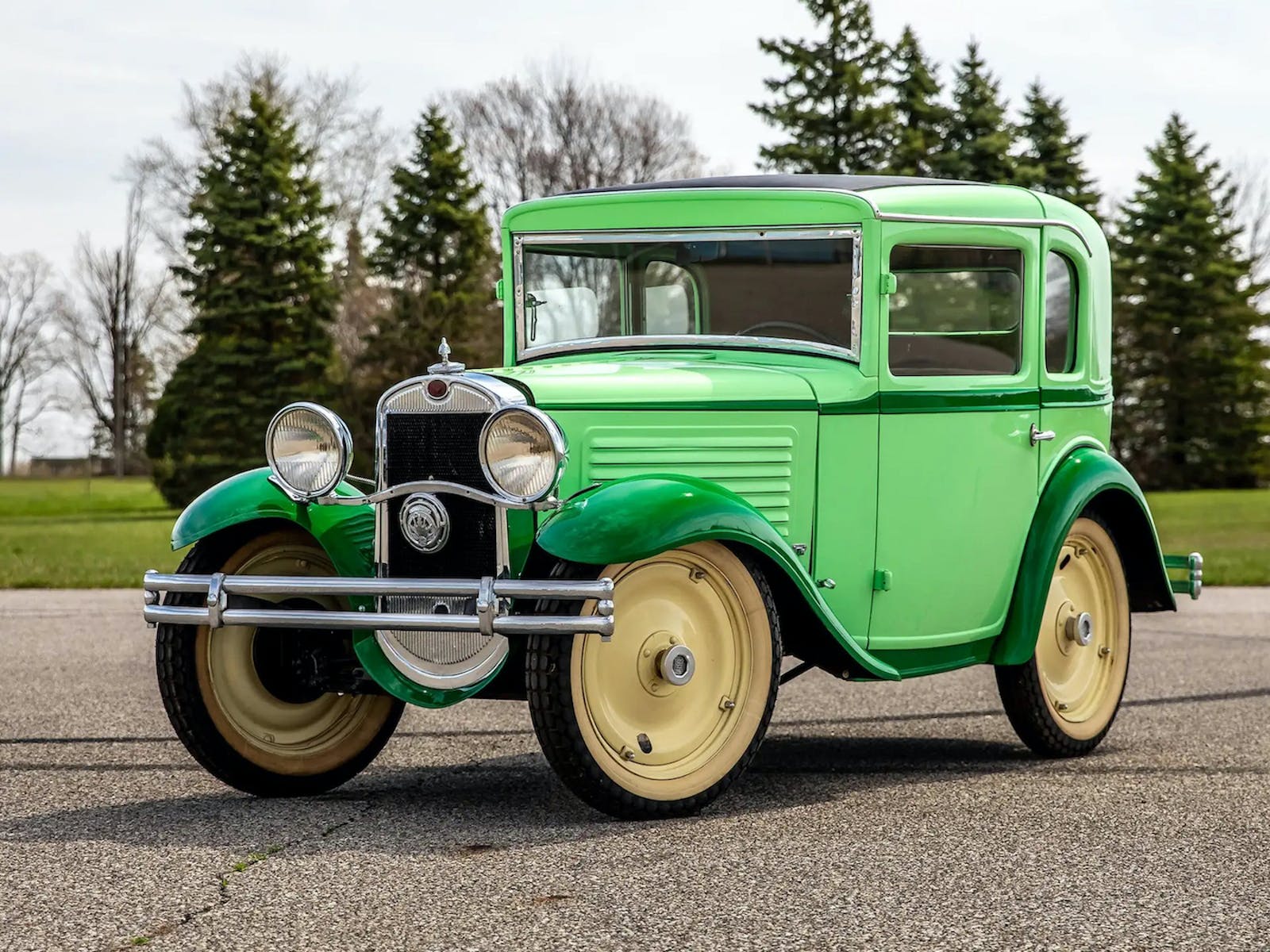 Get an insurance quote
A Story About
Share Leave comment
Read next Up next: 70 years ago, Bentley’s design department sketched out independence from Rolls-Royce