30 years on, the Mercedes-Benz 500 E proves the power of partnership

Competing automakers team up on projects more often than you might think. Sometimes, an OEM wants to share development costs of pricey new battery-electric vehicles (GM and Honda, for example), or maybe one marque really wants to revive a hallowed sports car but needs a platform to use, which is how Toyota joins forces with BMW and voila, the Supra/Z4 happens.

Thirty years ago, one German marque tapped a cross-town rival not for parts or money, but for engineering assistance and production capability in order to create one of the greatest sedans in history. The Mercedes-Benz 500 E broke cover at the 1990 Paris Motor Show, ahead of its spring 1991 on-sale date. The car was an adapted version of Merc’s W124 compact sedan, pumped up with input from Porsche, a company that was still years away from the water-cooled sports cars and cash-cow Cayenne that would in many respects save its business. The 500 E was the melding of two great automakers to produce something exceptional. 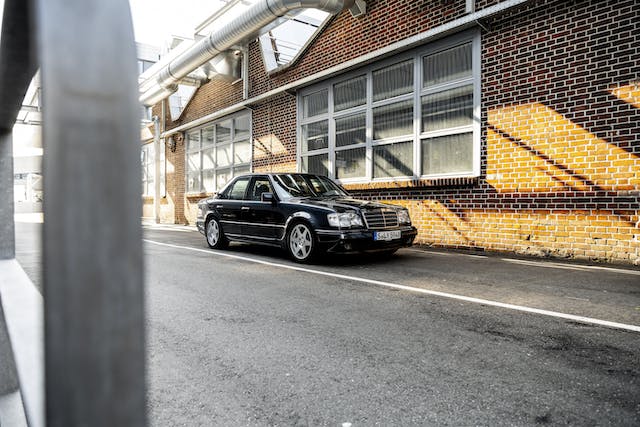 When Lexus unveiled the LS400 in 1989, the then-upstart luxury marque immediately began stealing sales from Mercedes. The W124, which had enjoyed a handful of strong years, suddenly became old news. To remedy the situation, the Silver Star faithful in North America asked for a V-8 variant.

Rather than sort the whole matter out in-house—The Mercedes was too busy trying to ready its next S-Class—Mercedes contracted Porsche to figure out how to stuff a V-8 up the W124’s snout. The V-8 in question was the now-famous M119, an engine that first appeared in the sultry 500SL. At the outset of the project in the late 1980s, that M119 was fresh off a strong showing at the 24 Hours of Le Mans—not a bad pedigree to draw on. To fit the M119 in the 500 E, Porsche had to widen the front frame rails, re-work the firewall, and massage a few other components to get everything to jive.

The result was an absolute dream of a sporty luxury sedan. Power figures were in supercar territory: 354 lb-ft and 322 horsepower, with 0-62 mph in less than six seconds, even with a four-speed automatic gearbox as the only choice. It was more than just raw acceleration, though. One Porsche engineer who worked on the project (internally dubbed “Project 2758”) recalled driving a 500 E to Lake Constance south of Zuffenhausen with a full load of three passengers (there was no middle seat in the rear because the differential was too large). The occupants were able to make casual conversation on the Autobahn while the car was doing 155 mph, which also happened to be the car’s electronically-limited top speed, thanks to a gentleman’s agreement between Merc and BMW.

To handle the added grunt from the M119 engine, The 500 E cribbed brake and suspension components from the 500SL, which meant the car had to be widened by 2.2 inches. That extra girth meant that the car couldn’t fit down the normal W124 production line at Mercedes’ Sindelfingen plant. So, in a gloriously chaotic feat of logistics, Mercedes leaned on Porsche for assembly duties. Body components were shipped from Sindelfingen to Porsche’s Reutter building in Zuffenhausen, outside Stuttgart. There, the bodies were modified to swallow the M119, before going back to Sindelfingen for paint, before heading back to Zuffenhausen with parts for engine installation and final assembly. The whole circus took 18 days per car, traveling from Zuffenhausen to Sindelfingen twice during the process. At the start of production, the line could produce 10 vehicles a day but that ballooned to 20 a day as demand for the super sedan grew.

Thirty years on from this fabled collaboration, Porsche reunited two of its engineers who worked on the project with the car itself. Michael Hölscher was a development project manager for the 500 E, and Michael Mönig worked in Porsche’s prototype management department. The two were there from the beginning of this joint effort, and they each share their stories with the car during a roughly 62-mile trip around the landmarks that played a role in bringing this brute to life. It’s cool to see Porsche take a break from fierce cross-town rivalry and celebrate a legend. You can hear from Mönig and Hölscher yourself in this two-part video series, posted below.

For another entertaining look at the 500 E, be sure to check out Hagerty’s episode of Revelations with Jason Cammisa:

Get an insurance quote
A Story About
Leave comment
Read next Up next: Ask Jack: Time to shuck the truck?