While most of the Rétromobile festivities in Paris were postponed this year, the three major auctions (Artcurial, RM Sotheby’s, and Bonhams) went ahead in modified form, spread out over the months of February and March. The last of them, Bonhams, wraps up on March 10 and, as usual, there is an enticing mix of sports cars, oddballs, race cars, and prewar greats to ogle.

Of course, being an auction en Paris, there are also plenty of home-grown French cars that are worthy of particular attention. Here are the five that most piqued our francophile interest:

Salmson was founded in 1890 in France as a pump manufacturer, and it’s still around today with subsidiaries all over the world. During the early years of the 20th century, however, the company tried its hand at building aircraft engines. Then, after World War I, Salmson started building automobiles, forming the Société des Moteurs Salmson in 1922 to produce cars at its factory in Billancourt.

Salmsons were popular race cars during the 1920s. This one, which sold new in the U.K. in 1926, ran at Brooklands in period and did high-speed trial events well into the 1930s. More recently, it has competed in VSCC (Vintage Sports Car Club) historic events in Britain and still looks ready to race.

By the 1930s, Paris-based Émile Darl’Mat owned one of the world’s largest Peugeot sales operations, so he had a lot of clout in the car world. One of only a few dealers able to offer custom coachwork to his clients, he also earned Peugeot’s blessing for a limited run of sports cars based on the Peugeot 302 chassis, with the larger 2.0- or 2.1-liter four-cylinder overhead valve engine from the Peugeot 402.

Darl’Mat went to coachbuilder Marcel Pourtout on the outskirts of Paris for the bodies, and Pourtout’s stylist, Georges Paulin, penned the streamlined Art Deco shape. From 1936–39, the partnership produced 105 of the swoopy Darl’Mat Peugeots, with 53 roadsters, 20 coupes, and 32 convertibles.

The cars did more than just look good. At the 24 Hours of Le Mans, the slippery Paulin-penned shape allowed for a high top speed (despite the relatively small four-cylinder engine) and three of the Peugeots finished in the top 10 at the 1937 race. In 1938, another placed fifth and won the 2.0-liter class.

According to Bonhams, only about 30 Peugeot Darl’Mats remain. This one was built in 1938 but wasn’t registered until late 1940, and remains in fairly original condition with its original wooden body frame and bodywork as well as the correct Cotal pre-selector gearbox with its long stalk shifter jutting up from the middle of the dash. The current owner bought it at Artcurial’s 2012 Le Mans Classic auction for €321,667 ($395,104 at the time). It needed engine work, which it has since received. That explains the higher estimate this time around, but the most expensive Darl’Mat ever sold at auction was a car with extensive period race history that brought $742,500 at Pebble Beach four years ago.

With its light weight, engine in the rear, and snappy handling, the A110 was a World Rally Champion (the first, in fact). It also enjoyed a production run of over a decade and a half, a stretch of time over which the car got quicker and the Normandy-based company (pronounced Al-peen) evolved into Renault’s performance and motorsport partner.

Even though Alpine engaged in heavy raiding of the Renault parts bin for the A110, the car’s design was ahead of its time, and its looks are beyond good thanks to Italian pen-for-hire Giovanni Michelotti.

The 1600 SX was the final version of the Alpine A110, only built during the model’s final two years of 1976 and ’77. This example’s early history isn’t known, but it has been restored in pursuit of what any A110 does best: historic rallying.

Citroën’s 2CV is automotive minimalism at its very best. Even its “range-topping” Charleston model amounted to no more than fancy paint and a handful of extra horsepower. That said, the Art Deco-inspired two-tone finish looks great on a deux chevaux and in a car with a maximum 29 hp, every pony counts. Originally intended as a one-season special edition, the Charleston proved so popular that Citroën incorporated it into the full range in 1980. This 1985 example was restored in 2012 and still looks like it fancies a cruise around town, basket of eggs safely on board.

Any Citroën DS is an interesting car. Just the way it looks rolling down the road is wild enough, not to mention its trippy one-spoke steering wheel or its self-leveling hydro-pneumatic suspension. When it comes to values, though, the most desirable “Dee Esse” is the one with two doors and a top that goes down, aka the convertibles by coachbuilder Henri Chapron offered from 1958 to 1973.

Even among the 1365 Chapron convertibles originally built, this car is a standout. Unlike a more common “Cabriolet Usine” (“factory convertible”), it was ordered directly from Chapron rather than a local dealership. It’s also a late production 2.1-liter I.E. (“Injection Electronique,” or electronic fuel injection) model and according to Bonhams it is one of just four semi-automatic Chapron-built convertibles on the DS21 I.E. platform. Other noteworthy features include extra stainless steel trim on the body sides, “trompe l’oeil” (optical illusion) paintwork on the dash that imitates wood veneer, Robergel spoked wheels, and a soft top made of Skai imitation leather. This topless silver bullet is oh-so-French, and oh-so-easy on the eyes. 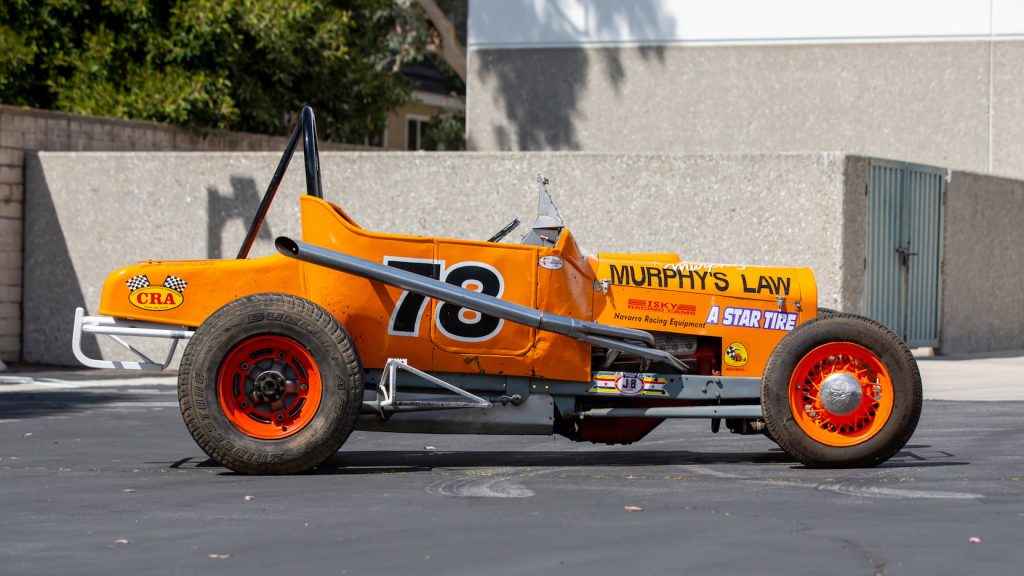